Two people arrested during protest for jobs, water and electricity 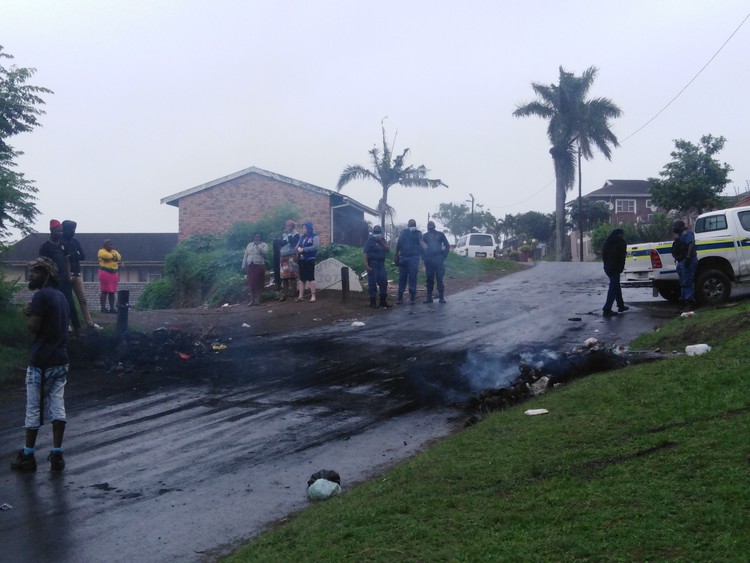 Shack dwellers from Sim Place informal settlement in Effingham, north of Durban, closed off several roads with burning tyres and rubble early on Monday. They are demanding to be included in job opportunities and they want services. Photo: Zimbili Vilakazi

At least two people are expected to appear in court soon after a protest demanding services and job opportunities turned violent in Effingham, north of Durban, on Monday.

KwaZulu-Natal Police Captain Nqobile Gwala said the group started protesting around 5:30am. She said two people aged 33 and 34 were arrested for public violence and will appear in court soon.

Shack dwellers from Sim Place informal settlement closed off several roads with burning tyres and rubble early on Monday. They demanded to be employed at construction projects in the area, electricity, clean running water and refuse collection from their ward councillor, Bobby Maharaj.

The informal settlement was established in 1993. Half of the area was connected to electricity in 2015 while the rest still rely on illegal connections. Taps that were installed in 2010, but residents say it has run dry. Sim Place informal settlement has toilets but they are all closed because they haven’t been cleaned, so most residents have built their own pit toilets.

Mbongeni Mkhize, 37, who has lived in Sim Place for five years, said: “It has been four years since we elected [Maharaj] but we are still not alerted when there are available jobs. Most of the electricity is illegally connected.

“We get water from neighbouring suburbs while others manage to connect it illegally but sometimes the pipes burst and flood our shacks, damaging our belongings,” he said.

Mkhize said they protested three weeks ago and handed over a list of their demands to Maharaj. They decided to block the streets again when he did not respond to them.

Maharaj denied that there was a lack of service delivery in the area. He said that he had called the community leader to accompany him to the eThekwini Municipality to inform the Speaker of the community’s grievances. But when they got there, he said, they were told the Speaker would be in meetings for weeks.

He said there are about 42,000 shack dwellers in the ward. “We can’t have jobs for all of them. When we have ten jobs, we take for instance one person per settlement,” said Maharaj.

EThekwini Municipality’s spokesperson Msawakhe Mayisela slammed the group for blocking roads to raise their grievances. Mayisela said he was not aware of the list of the group’s memorandum and therefore could not respond to their claims.

Next:  Forgotten farm dwellers in Philippi plead for services