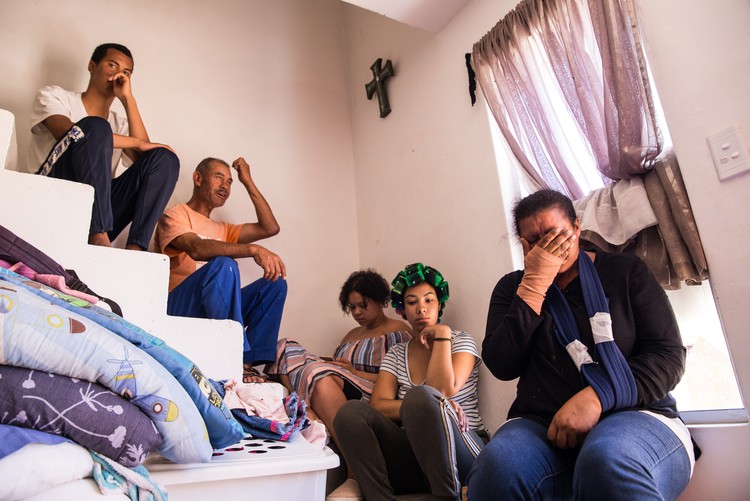 From left: The Van Der Vendt family including Enriquo, Eric, Shamonique, Nicole and Edwina (who is in tears with her hands still injured from the day of their eviction) at their home in the Vlakkeland Housing Project in Wellington. They were evicted from the Irene farm in Paarl last week. They had lived there for nearly 23 years. Photo: Ashraf Hendricks

It’s been a week since the Van Der Vendt family were forcibly evicted from the home they lived in for 23 years on Irene Farm in Paarl.

The family of nine, which includes five children, were relocated to Drakenstein municipality’s Vlakkeland Housing Project in Wellington on 20 October. Since then, Eric Van Der Vendt, a farmworker, and Edwina Van Der Vendt, who worked as a domestic worker in Paarl, say they have not been able to commute to work or send the children to school.

“It’s difficult when you work hard for a small income and then you have to see and accept how everything you worked for is broken,” said Eric.

In April, we visited the Van Der Vendts at their home on the farm following an attempt to evict them by the municipality and relocate them to a Wendy house in New Orleans. At the time, Edwina Van Der Vendt refused to move, stating that it was not what was promised to them.

Riana Geldenhuys, Drakenstein municipality spokesperson, said that there was no agreement with the municipality regarding the proximity of the Van der Vendts’ house to clinics, shops or specific schools.

But a court document from 2014 shows that the home that was supposed to be provided to Van der Vendt and her family had to consist of “a standard two bedroom brick and mortar structure with indoor sanitation facilities”. The house was supposed to be located “proximate to public mode of transport (i.e. taxis, commuter trains) within Paarl”.

A few days after the family’s move to the house in Vlakkeland, most of their belongings were still stacked in big heaps in their backyard. The house is visibly not meant to accommodate a family this size. It has two bedrooms, a kitchen and a bathroom.

The family described their eviction.

The Van Der Vendts explained that their two daughters were home alone when officers arrived and began packing their things into bags. “I wouldn’t have known about this if my boss hadn’t fetched me at work and told me to go home urgently,” said Eric.

Edwina alleged that she was manhandled by police during the eviction. “I don’t understand why they became violent,” she said. She has opened a case at Paarl Police Station for assault.

Colonel GJ Braaf, acting station commander at Paarl SAPS said that they “were forced to intervene and to maintain peace and order” after Edwina apparently became aggressive with the sheriff of the court. Braaf said that the “police are only responsible for the protection of the sheriff” during legal evictions.

(Geldenhuys said that no municipal officials were at the eviction that day.) 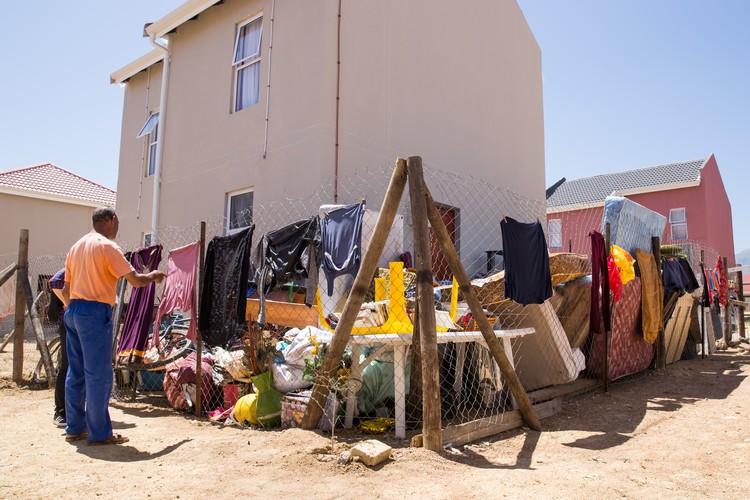 Most of the family’s belongings are still stacked outside in the small yard since their eviction last week. Photo: Ashraf Hendricks

Edwina said many of their belongings were also damaged or went missing during the move. She said that two of her children in matric also can’t find their textbooks. They also have not been able to find their IDs or most of their clothing.

The Vlakkeland housing site is not close to a clinic, a hospital, a shop, or any of the children’s schools, she said.

In a statement, Billy Claasen of the Rural and Farmworkers Development Organization, said: “Vlakkeland housing project is a place where farm workers have been dumped by the Drakenstein Municipality and the farmers.” He said that housing units are extremely small and that “it is a shame” to relocate people there.

Geldenhuys, however, said that the Vlakkeland housing project is not for emergency housing, but for those on the municipality’s housing waiting list.

Next:  Subsistence farmers under siege from land occupation