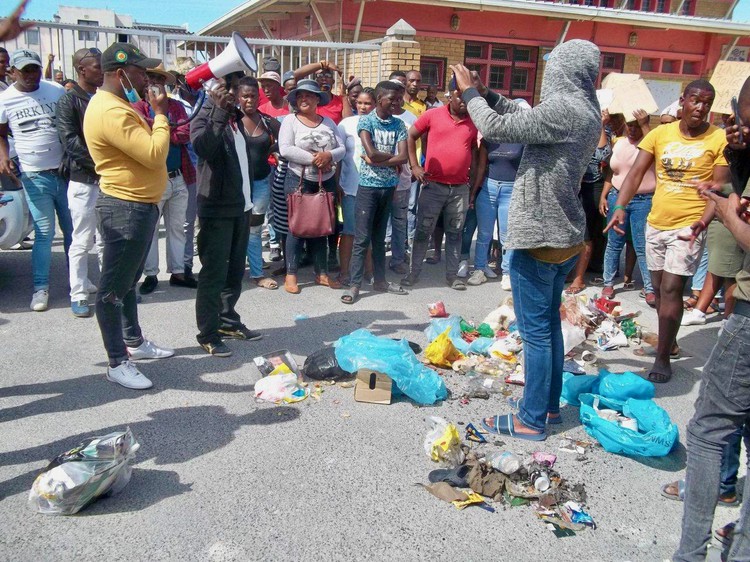 Shack dwellers from Eyadini informal settlement confronted Councillor Sithembiso Mzobe (in yellow on the left) at his offices in Samora Machel on Monday. Photo: Vincent Lali

The demonstrators scattered rubbish outside his office as they sang struggle songs and waved placards with one main message: “We want water, toilets and electricity”.

Community leader Siyamcela Lali said, “Whereas the ward councillor relieves himself in a flush toilet inside his brick house, we shit in plastic bags inside our shacks at night and live with the smell of our own faeces until the next morning.”

“Shack dwellers have to walk for more than two kilometres to look for a place to relieve themselves,” said community leader Sinesipho Ben.

She said Eyadini has been without basic services for three years. They want Eyadini to be recognised, by including it in the Samora Machel ward forum and community policing forum. “We demand to be placed on the database of informal settlements that are under Samora Machel,” she said.

They want the City to install toilets, more water taps and “at least one street light”, she said. “We don’t mean chemical toilets, but flush toilets that will give us dignity.”

“We have kids who struggle to do their homework at night because it’s dark inside our shacks,” she said. “We demand that electricity be installed in Eyadini even if it doesn’t belong to the City of Cape Town.”

“We want the City to give us a shipping container to put our rubbish in and to hire regular cleaners for us,” she said.

They also want the shack dwellers to get “first preference” when the ward councillor hires labour for local projects. “You hire your friends for local projects while we battle with poverty in our areas,” she told Mzobe.

“An incompetent leader who has failed dismally to govern his ward,” she said. “He never even invited us to a community meeting to explain how he uses his ward budget.”

Mzobe said he would not entertain such allegations.

“I have given them water taps and now plan to give them 400 chemical toilets,” he said.

Mzobe said he would meet the Eyadini community leaders and discuss their demands before the end of the week.

“They don’t belong to my ward, but I assist them because they stay in a neighbouring ward,” he said.

Next:  Family “dumped” in Wellington can’t travel to work and school