“Nobody pays to work, yet if I do not pay to work, they will just get the next person” 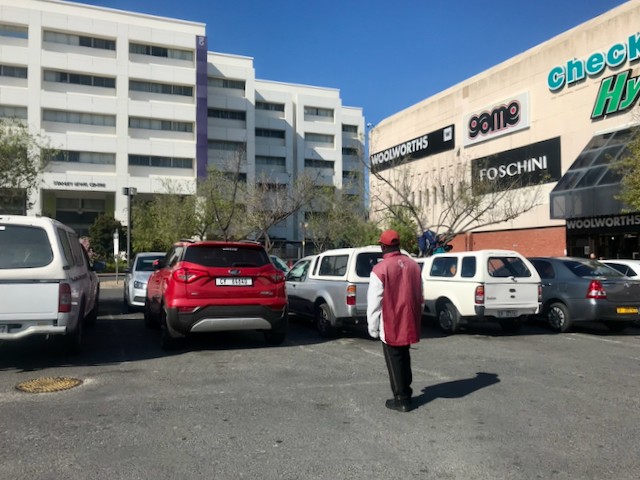 Car guards at Parow Centre say they have to pay R30 a day to be allowed to work in the parking lot. Photo: Tariro Washinyira

Car guards watching over vehicles while the motorist is away are a common sight in South Africa. With persistently high levels of crime and unemployment, car guarding remains a viable means to earn a meagre living in the informal sector, partly due to low entry barriers.

According to StatsSA, 7.9 million people are unemployed in South Africa, which has an official unemployment rate of 34.5%. As no registration of car guards exists, there are no accurate numbers available, yet it is undoubtedly the livelihood for very many people. A city such as Durban has seven relatively large malls and many smaller shops and sites where car guards operate. From our observations, we estimate that in Durban alone, the number of car guards may be around 3,000.

Our recent paper notes that agents charge R35 or more simply to allocate a parking bay. As car guards are not employed by the agencies, they receive no salary, paid or sick leave and very few, if any, benefits.

Furthermore, the agents may sell or hire branded jackets and security equipment.

Car guards, by the very nature of their dispersal over many different locations, their vulnerability and the controls imposed on them by agents, cannot easily form or join unions and negotiate a minimum wage.

The agents maintain control by ensuring that those who do not pay do not work at the site. In many ways, these agents simply act as no more than unregulated labour brokers.

But most car guards do not speak out against these unfair daily bay fees, due to fear of losing their jobs. Many are also undocumented immigrants, who fear being deported if they speak up.

In addition to the low earnings, car guards may experience verbal abuse or may have toxic relationships with the car guard agents or the management of the parking sites.

Furthermore, car guarding agents and managers seldom offer any support to the car guards. If any complaints are lodged against a car guard, either by the public or motorists, or if any misconduct is reported, the car guard is often immediately dismissed, irrespective of who was to blame.

In the interviews we conducted, a car guard said “paying day fees is cutting our throats”. Another car guard reasoned that “nobody pays to work yet if I do not pay to work, they will just get the next ou (person)”.

Car guard agencies have full control in this asymmetrical relationship, and car guards have no trade union or other recourse.

In theory, under South African labour legislation, these individuals should be protected; however, in practice, their unusual employment circumstances prevent the enforcement of any rights.

Over the years there has been a lot of commentary regarding car guards in the media, much of it negative. For example, News24 reported that in Observatory, Cape Town, some car guards may be aggressive or threatening towards motorists; car guards were said to have demanded R10 to watch over cars in Pietermaritzburg; a car guard was reported to have stabbed a motorist in the street for not paying a tip.

The Private Security Industry Regulatory Association (PSIRA) has been lobbying to register car guards and ensure that they complete minimum security training.

The Basic Conditions of Employment Act was amended in 2015 to include car guarding under the sectoral determination of private security. This was to force car guards to obtain a grade E security certificate. Car guards would need to pay to attend a week-long training programme and pay a monthly membership fee to PSIRA.

PSIRA’s attempt to regulate car guards reached a turning point in December 2018, when The Mercury reported that car guards not registered with PSIRA had been arrested at several shopping centres in Durban. Most of them were immigrants, and none of those arrested had any personal identification on them at the time of arrest.

In response to the arrests, and to reduce the risk of agents also being arrested, the car guarding agents side-stepped the law by renaming the job Customer Trolley Assistants, though these workers still guard cars, and the process has not changed at all.

The drive by PSIRA to regulate and ultimately formalise car guarding may be well-intended. But attempts to formalise the informal economy without the participation of the workers themselves, may in fact jeopardise lives and livelihoods. In addition to paying for the PSIRA training, who would pay the monthly PSIRA membership fees?

Throughout South Africa, there are examples of initiatives to better regulate car guards. For example, Kalk Bay municipality is in a process of formalising car guards, spearheaded by local businesses, with the intention of reducing potential crime associated with unregulated car guards. The Simon’s Town Community Policing Forum has taken the initiative further by launching a project to train and then hire car attendants in collaboration with law enforcement agencies.

Our interviews with car guards in 2015 and 2019 provide evidence of a deterioration in the incomes of car guards due to factors such as the slump in the economy, the daily bay fees, and automation such as boom gates at many shopping centres and businesses.

Studies that focus on informal economic activities such as car guarding will enhance our understanding of the labour market challenges faced by so many in their quest to earn a living and provide a future for their children and the next generation. There is an urgent need to deal with the problem of agents profiting from the meagre earnings of car guards.

John Foster (PhD) is a lecturer at Varsity College, Durban; Mihalis Chasomeris is an associate professor, Graduate School of Business and Leadership, University of KwaZulu-Natal; Derick Blaauw is a Professor at the School of Economic Sciences, North-West University.

Previous:  Trolley assistants at malls pay a “fee” to be allowed to collect tips from shoppers

This is exploitation at its worst. Since when does an employee pay the company to work? The uniforms are a rip-off - I feel sure these could be negotiated at a reasonable price. These guards are working to aid the customers and assist in keeping us "safe". They also on occasion have to tolerate rude customers. This needs to be addressed immediately. It is heartbreaking to witness these people doing an honest job to earn enough to feed their families. If I had the power and influence, this would come to an end.