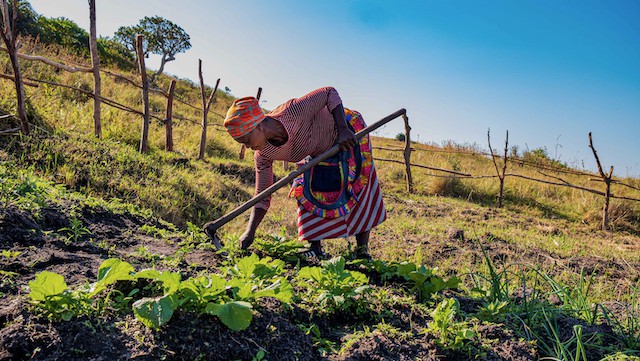 In the coastal region of the Amadiba Tribal Authority, a community’s resistance to a controversial mining development is being channelled towards a new campaign: vote the ANC out.

People in Ward 25 in Winnie Madikizela Mandela Municipality (formerly Mbizana) live mostly from subsistence farming or acting as tour guides. The area has natural springs and people can mostly live off the land.

But for almost two decades, there has been division in the community over a proposed mine along the 22 kilometre stretch of coastline with its titanium-bearing red sand dunes. Community activism has so far halted an Australian mining company’s ambitions for the area.

Some residents told GroundUp the ANC had let them down by prioritising the mining development out of self-interest while neglecting to provide basic services to communities.

Residents we spoke to were unanimous in their assessment of the local municipality’s performance as poor. There is no tap water, only natural streams where residents fetch water. Few of the households have electricity and many residents have installed their own solar panels for LED lights and charging cellphones.

The roads between villages are barely usable. The 70km journey to Bizana, where the nearest hospital is, takes more than two and a half hours in a 4x4 vehicle. Very few residents can afford a cheap car, let alone a four-wheel drive vehicle.

A good stretch of gravel road is hard to find. Residents have to find alternative routes, bypassing the official road to avoid getting stuck in a donga or a muddy patch. Most of the roads are littered with potholes and rocks.

GroundUp found one road construction project, but the road seemed to be falling apart quicker than it was being built. This new road would make it easier for residents to access healthcare and shops, and to transport their vegetables and produce to market. But not far behind the construction trucks, the new road has already been eroded by rain. Massive potholes have formed and there car tracks on both sides of the road show where people had taken alternative routes. The construction trucks themselves seem to be damaging the road. 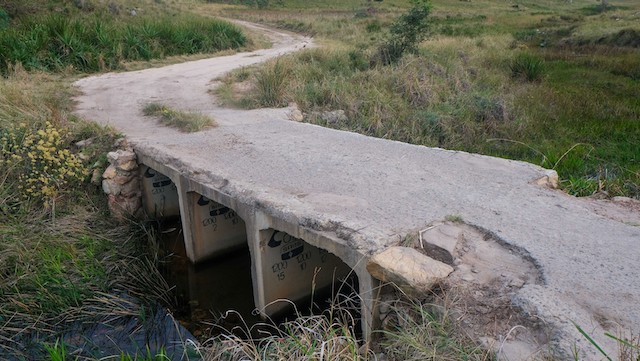 A prefab bridge installed by the municipality, barely wide enough to fit a car, is crumbling.

One intervention by the municipality was to install a prefabricated bridge that is barely wide enough for a car to cross. One resident told us that the bridge was not necessary in the first place. The municipality arrived without consultation with the community, dug a hole, and installed the bridge. Now the bridge is falling apart.

Residents said the municipality’s officials had shown support for the mining development and they felt they were being held hostage: support the mine or suffer without roads and water.

Luleka Ndovela said many people were planning to vote out the ANC in the upcoming local government elections.

“The ANC has failed us dismally and there’s no hope that we will ever get service delivery in this area, unless we agree with this mining development they want to build here,” said Ndovela.

“Our cry is for the roads. I don’t know how many times we visited the municipality offices asking for roads. The roads are bad. When it rains, we can’t go to town and our children also suffer because some are relying on scholar transport. When it rains, the bus gets stuck in the mud, meaning our children are forced to stay home,” she said.

“As for electricity, we stopped crying a long time ago [for that],” she said. 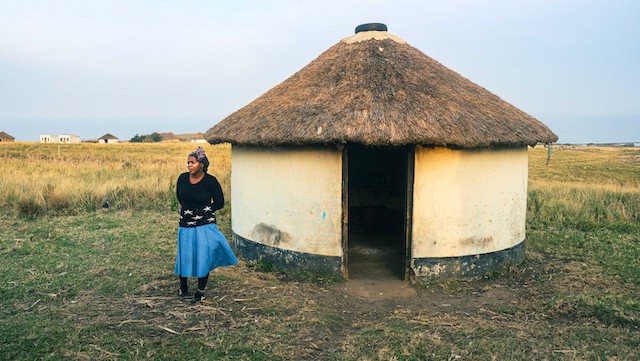 Luleka Ndovela, standing outside her rondavel, said, “The ANC has failed us dismally and there’s no hope that we will ever get service delivery in this area, unless we agree with this mining development they want here.”

Cromwell Sonjica, a community activist and local tour guide, said the move to vote for opposition parties was an attempt to hold the ANC accountable.

“Here if we want service delivery we have to fight. I will make an example about this road they are building now which started months ago and has not been finished. The only reason the local municipality built it is because the community gave them no alternative. They were planning to develop a ‘Blue Flag beach’ and they wanted to install a sign board,” said Sinjica.

He said the move was stopped at Komkhulu (the Great Place), where community members go to voice their concerns to the traditional council. “The municipality officials were told to first build the road before they are allowed to build the sign board.” 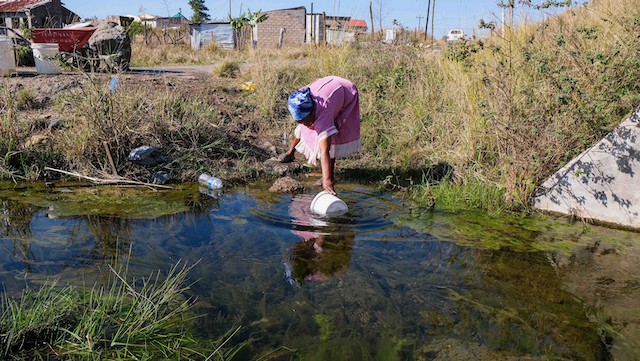 Noxolio Vungwana gathers water for her family from this green and slimy stream.

Outside Ward 25, in the more inland areas of Winnie Madikizela Mandela Municipality, natural springs and streams are less easy to find. Alongside the R61, the main provincial route that cuts through the municipality, many residents don’t have running tap water.

Noxoliso Vungwana was gathering water from under a bridge. She was born in this area and has lived here her whole life. She said the area never had standpipe taps.

“Chances of getting clean water are very slim and we have made peace with that. To me this is the taste of clean water because I never tasted clean water before,” said Vungwana.

“As you can see we are drinking with animals. The water is coming from streams on top and we don’t know what is happening there,” she said.

The water was green and slimy and looked undrinkable, but Vungwana said the water used to be worse.

“I wish you can come here after it rains, you will find this water so dirty. But we use it because we have no other options,” she said.

According to 2011 census data, there are 2,103 households in ward 25 and 57% of the population are under 18. No residents receive water from a regional or local service provider and there is no refuse disposal. Only 7.7% of the residents are formally employed. The average annual income is R2,400 per person (R200 a month).

In the greater Winnie Madikizela Municipality only one in five people receive water from a regional or local service provider, and even fewer have electricity. The average annual income is R15,000. 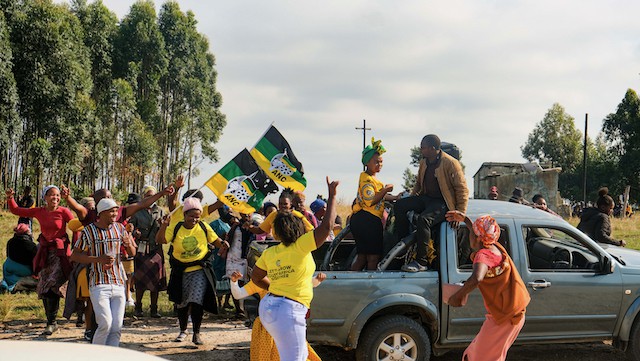 The atmosphere as a meeting for Ward 25 ANC ward councillor nominations was electric.

The ANC has dominated the area politically since 1994. Winnie Madikizela Mandela Municipality is part of Alfred Nzo District Municipality; both are ANC-led.

When it comes to municipal elections, the chance of a middle-class salary as a ward councillor or face unemployment makes the stakes high. In April, an ANC ward councillor in the Winnie Madikizela Mandela municipality was arrested for the murder of a fellow ANC-member.

Last month at the community hall, ANC ward councillor nominations for ward 25 were underway. The ANC branch had identified four potential candidates and it was up to community members to select the final candidate. The incumbent, Mpetha Ndovela, had a crowd of supporters who were singing, dancing, and waving ANC flags. A newcomer, Noluthando Ncamane, also had a good show of support.

The event was scheduled to start at 10am, but the regional ANC officials only arrived at 4pm to preside. By then, many people had started walking home since many had far to go and sunset was around 5pm.

Ncamane’s supporters argued that the nomination should be postponed due to the regional officials arriving very late, but the officials proceeded and Mpetha received the nomination.

Asked by GroundUp, Ward councillor Ndovela denied allegations that the municipality is only serving those who want the mine.

“Every time we have a development I always make an announcement at a public meeting called by ward committees.”

“If you check the area, there are people with RPD houses; those beneficiaries were selected because of the need, not because they support the mine,” he said.

Ndovela said he supported development in the area, whether a mine or tourism.

Signs of opposition to the ANC in Ward 25 were evident in the 2016 local government elections. The ANC received 80% in Winnie Madikizela Mandela municipality as a whole, but in ward 25 the EFF got 37% of the vote.

In the 2019 national elections, opposition parties gained further ground. In Winnie Madikizela Municipality the EFF doubled its 2014 vote to get 7.5%.

In one of the 11 voting districts of ward 25, the African Transformation Movement (ATM) outperformed the ANC, getting 44% of the vote. In another, the EFF received the majority vote with just over 50%.

Sonjica told GroundUp that both the ATM and EFF had campaigned in the area in the lead-up to the 2019 elections. For now, ATM and EFF are the only alternatives, Sonjica says, so “we’ll give them a chance”. 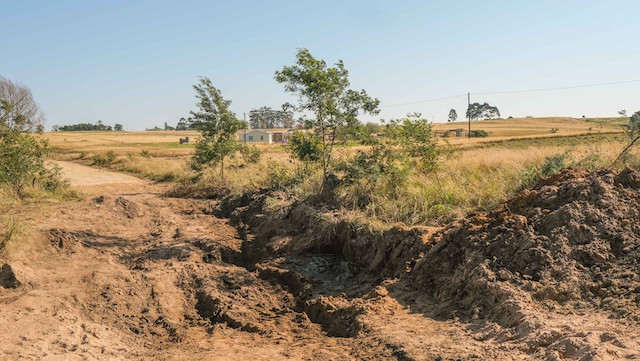 In the 2018/2019 financial year, 19% of the Winnie Madikizela Municipality operating budget and 20% of the capital budget went unspent. No money was spent on repairs and maintenance, and R10 million was flagged as fruitless and wasteful expenditure.

The Alfred Nzo District Municipality, of which Winnie Madikizela Municipality is a part, had 39% of its expenditure classified as fruitless and wasteful.

The Auditor General gave Winnie Madikizela Mandela Municipality an unqualified audit for 2018/2019, but noted however R23.3 million in irregular expenditure, which had accumulated over a number of years and had not been recovered, written off, or condoned.

The Auditor General also found bid documentation that did not accord with the preferential procurement regulations; the performance of some contractors or providers were not monitored in accordance with the Municipal Finance Management Act; contract management measures were not sufficient; and irregular expenditure from the previous year was not investigated.

Next:  This charity has been feeding Cape Town’s hungry for more than 80 years. Never have so many people queued for food