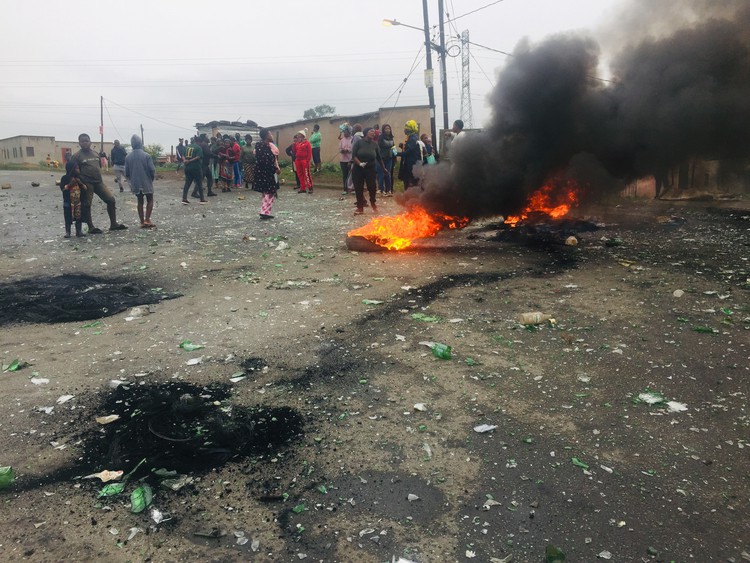 Residents of Ward 13 in Pietermaritzburg protested on Monday against the appointment of Sibongile Mncwango’s as their ward councillor. Photo: Nompendulo Ngubane

Residents of Ward 13 in Pietermaritzburg blocked roads with burning tyres and rubble on Monday in protest against Sibongile Mncwango’s appointment as ward councillor.

The protesters, who say they are ANC supporters and members, live in Slangspruit, Nyamazane, France, Denmark, Marikana and Imbali Unit BB.

“Sibongile must go. She must retire and spend time with her grandchildren… We don’t want a ward councillor who doesn’t listen to the people. She is arrogant and never available when we need her,” said a protester who asked to remain anonymous.

Several protesters we spoke to complained that during her term as ward councillor, Mncwango failed to implement any development projects in Ward 13.

The group demanded that ANC Provincial Secretary Mdumiseni Ntuli come to the area to address them. They said Ntuli had promised them during a visit on 28 September that the disputes about the selection of ward candidates would be resolved after the local government elections.

Mncwango has been the ward councillor for the past five years.

Ward 13 is among several wards under the Msunduzi Municipality that took issue with ANC’s selection of ward councillor candidates. In 2016 the ANC received over 13,000 votes with a massive 86% share of the vote. This dropped to 64% last week, with fewer than 5,000 votes. The EFF, in second place, increased its share of the vote to 22% last week from 5% in 2016. Its vote count increased from 728 to 1,707.

In August we reported on ANC members from Ward 14 in Willowfontein who protested and threatened not to vote if the party didn’t change its list of ward councillor candidates for the local government elections.

On Saturday members of various ANC branches also protested outside the party’s offices, demanding that the candidate selection be changed as had been promised by the provincial leadership.

When GroundUp contacted Mncwango, she said she wasn’t aware of the protest and refused to comment on complaints by protesters.

ANC Provincial spokesperson Nhlakanipho Ntombela said that on all outstanding disputes, the NEC took a decision that they will be attended to after the elections as they had to campaign in a limited period. He said the team will start adjudicating complaints next week.

Next:  Willowvale is where government projects go to die

Previous:  High Court warns Legal Practice Council “to get its house in order”