Eastern Cape villagers refused to vote because of no-show mayor 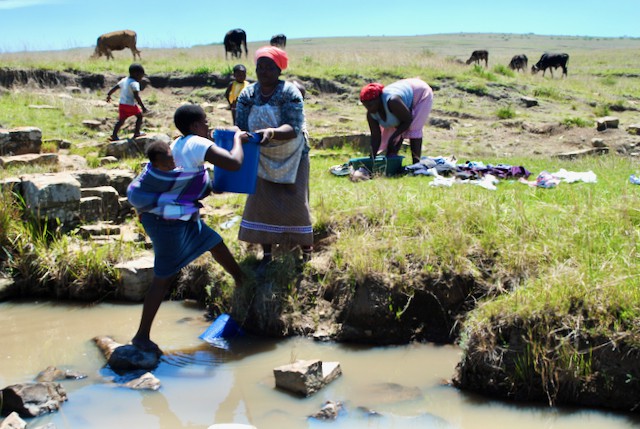 Yoliswa Ntlukaniso and her daughters Aseza and Elona and grandchildren collect water from a river where animals drink at Phungulelweni Village in Ntabankulu, Eastern Cape. Photos: Mkhuseli Sizani

On election day, the villagers of Phungulelweni shut down the voting station in Ward 13 of Ntabankulu Local Municipality. They padlocked Phungulelweni Junior Primary School in protest over a lack of water and bad roads.

Ironically, the handful of votes for the ANC (with 16 votes and two votes going to the EFF) gave the party a slightly higher percentage of the vote (89%) than in 2016. Overall in the ward the ANC got 84%.

According to residents, police were called to cut off the padlocks, but people still did not turn up to vote.

“I am 70 years old and it is the first time in my life seeing our people fed up with the ANC,” said Mavalela Ntlukaniso, a village headman. “Voting used to be so exciting here. But a lack of service delivery and empty promises angered the community.”

“We believe the decision we took should teach all the officials, especially those who belong to the ANC, to respect the voters.”

Sive Ndumelane, of Phungulelweni, said, “We felt that these municipal officials are no longer taking our votes seriously. They are just greedy for our votes in order to stay in power.”

“On 27 October we called a public meeting with our mayor, Tsileng Sobuthongo, because we wanted to show her our appalling living conditions.”

“In her five-year term as our mayor she never visited our village. But we waited in vain for her, and we were told that she was busy with election campaigns.”

Ndumelane said the meeting was rescheduled for the next day. “We waited for her again on 28 October, but she never pitched up, and not even an apology was sent to us. The ANC local leadership also waited in vain for her. We then felt that our grievances were not important to her.

“About 90% of voters here are ANC supporters. But we decided not to vote for any political party or an independent candidate because we want to teach the ANC a lesson – that it is not bigger than its supporters,” he said.

Ndumelane said when it rains the village is cut off, the road impassable. The nearest towns are Mount Ayliff and Mount Frere.

“Ambulances are unable to get into our village. We use old beds to carry a patient to the gravel road, including pregnant women. For a dead person we use a step ladder to carry the corpse on to the mortuary van at Esingqushweni,” he said.

Nine communal standpipes were installed in 2003, and two more in 2017.

But, she said, “If we receive water in our taps, it does not last more than two hours. When we complain about this poor supply to the [Alfred Nzo] district municipality, we are told that water is a national crisis.”

“We only drink fresh water during the summer rains, because in 2016 the municipality built about 250 RDP houses and provided them with jojo tanks. But for the rest of the year we share water in the river with animals,” she said.

Yoliswa Ntlukaniso, a mother of six, says she fetches water at midnight. “I go three or four times to the river and climb this hill with a bucket full of water on my head. I still have to bath my four children for school and wash the dishes,” she said.

“But if I wake up late I will find the water dirty because cattle, goats, sheep, pigs, horses, donkeys also drink there. Then I have to wait until the water clears.” 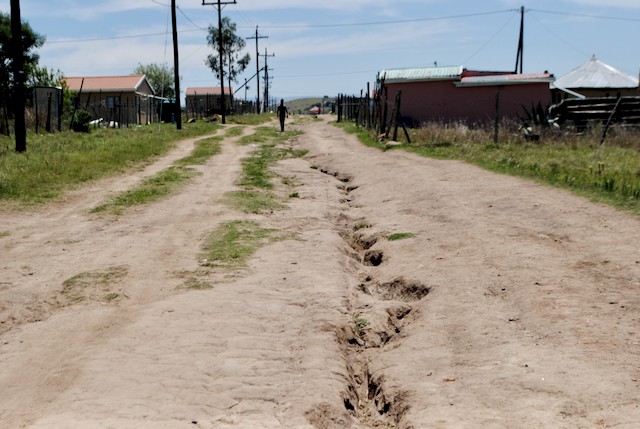 Spokesperson for the Ntabankulu Local Municipality Lungisile Mzanywa said, “The municipality is aware of the state of access roads across Ntabankulu. We have long admitted … that we have a backlog … Much of our resources over the years have been largely invested in electricity because most of the protests were about electricity.”

“Our honourable mayor has sought assistance from the provincial government to shorten this backlog.”

Mzanywa said the mayor did send a delegation but the community was not satisfied with this. He said she could not go personally to Phungulelweni because “we have 100 villages and the mayor’s visits are ward based”.

He directed all questions regarding water problems to the Alfred Nzo District Municipality. Its spokesperson, Xolile Patela, has not responded since last week.

Next:  How horses give hope to Atlantis youth

Previous:  PRASA liable for injuries to man thrown from train