This charity has been feeding Cape Town’s hungry for more than 80 years. Never have so many people queued for food 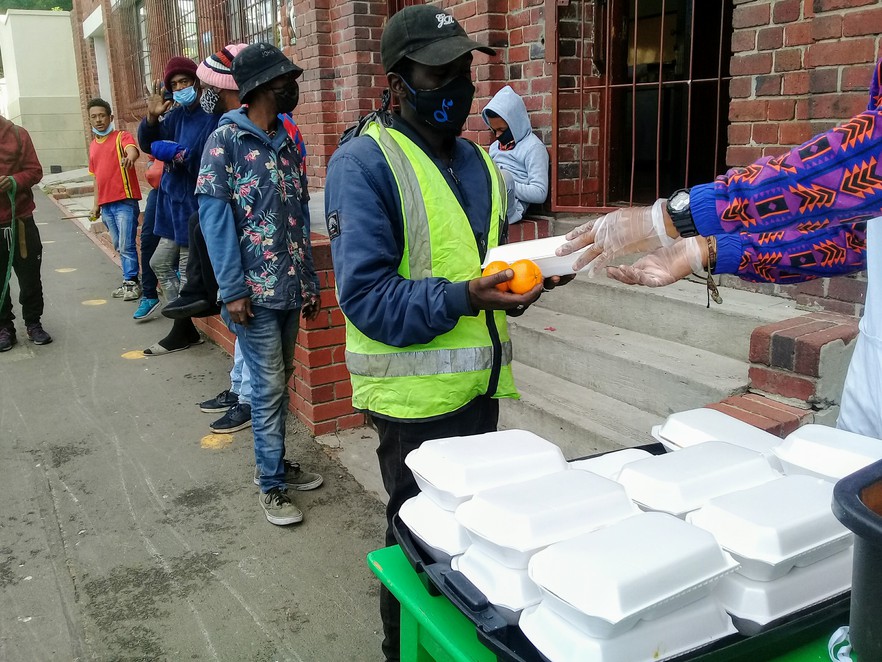 Record numbers of hungry people are queuing for food at The Service Dining Rooms in Cape Town as Covid-19 batters the economy.

The organisation has been cooking meals for Cape Town’s hungry for more than 80 years. But the numbers of people coming now are unprecedented, says operations manager Karen Cain.

Before Covid hit last year, Cain said, the organisation would normally serve breakfast to about 60 to 80 people, and lunch to about 250 people daily. Last Friday, they served 177 meals at breakfast, and more than 400 meals at lunch. A new record, says Cain.

On Sunday 27 June, President Cyril Ramaphosa announced that the country would be moving into adjusted level four of the Covid-19 lockdown. Under these additional restrictions all gatherings are prohibited, the sale of alcohol is banned, and restaurants and other eateries are only permitted to sell food for take-away or delivery.

“Since Ramaphosa addressed the nation on Sunday, we’ve had a huge spike of people from the restaurant businesses, the baristas, waiters, chefs, barmen,” said Cain.

“They come in looking very smart. Some of them have got somewhere to live, but they just can’t afford electricity anymore, and they can’t afford the cost of buying food.

Cain said that before Covid hit, it was mostly homeless people and some of the refugees at Greenmarket Square who came for meals. “But now it’s everyone,” she said.

She said more and more school children are queuing for food.

“We’ve got children as young as 6-years-old coming here unaided, and you can see that they’re school children because they still have their school uniform on. Some of them take the train or other public transport, and they come to town to join the queue.”

There has also been a spike in the number of families arriving for food, with several living in informal structures and tents behind factories in town, said Cain.

“Families are sleeping in cars now. They’ve lost their houses, but they still have their cars. You can see right down at the bottom of the Goodhope centre. They’ll start their cars in the morning because they’re being moved on, and they move somewhere else during the day because they’ve got a little bit of petrol, and then at night they move back.”

The youngest children coming with their families are about six-months-old, she says. 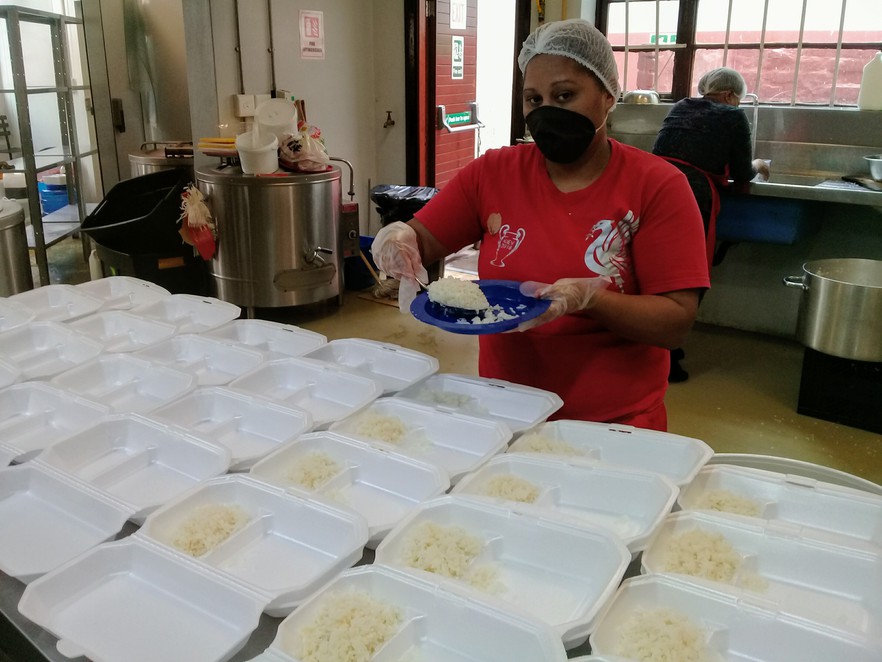 Nazeera Carolissen works as a cook at The Service Dining Rooms. She said the pace at which they’ve been preparing and serving meals has increased drastically since May this year.

The all-women staff consists of seven members. Two volunteers help out on a Monday and Thursday.

The organisation used to have a system where tokens could be bought for R1 and used to ‘pay’ for breakfast and lunch. Tokens could also be acquired by showering at the nearby Hope Exchange, working in the garden or going for an HIV or TB blood test.

But with the soaring demand for meals and the time constraints of staff having to enforce Covid safety regulations, the token system has been amended. Tokens are now only collected during breakfast, to encourage those living on the streets to shower at the Hope Exchange.

Cain said there had been a surge in the number of men between 25 and 34 years old.

“With each restriction level, we’ve seen a steady increase in the number of people coming here. So we’ll see an extra 50 new people a month that we’ve never seen before.” She said more than 80% of the people who come are black but the number of white people is also rising.

“Our clients have increased drastically,” said kitchen manager Masooda Petersen. “On a daily basis there are new faces here, and we’re getting more children and older people. The increase in numbers shows how much people are struggling out there.”

Petersen said people waiting at Home Affairs offices in town or returning from nearby clinics also come when lunch is served.

“Quite a large number of men who work at the construction site nearby come here during lunch time to have a meal. Some of them also come here for breakfast before work,” said Petersen.

Meals were previously served indoors, but are now served outside in takeaway containers. Instead of waiting inside, everybody has to wait across the road on a grassy bank opposite the dining rooms.

A staff member sanitises their hands and 20 people at a time cross the road and stand on the painted dots on the pavement outside the dining rooms to comply with social distancing regulations.

They then collect their meals in takeaway containers and move back across the road to eat. The next 20 people are then selected, and the process goes on until everyone has received the meal.

Children, women, transgender people, and those with disabilities are served first. Meals are then served to men over the age of 60 years, and then to everyone else waiting.

The organisation also hands out masks weekly and provides drinking water for those waiting in the queues. 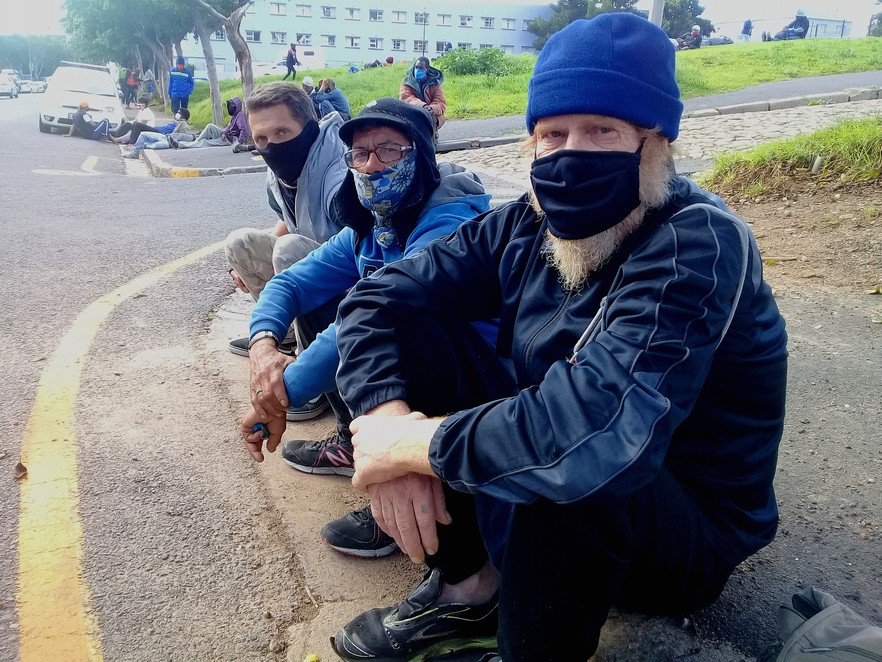 Shane (left), Trevor and Dennis regularly visit the centre to collect breakfast and lunch. Dennis (front) said he last had a proper meal ten days before this picture was taken.

Petersen said the meals depend on what is available.

“For breakfast we serve coffee with oats or maize meal. For lunch we serve a cooked meal which consists mainly of rice, chicken, broccoli, mixed vegetables, a sausage, with four slices of bread, and fruit where we can.”

“We go through about 40kg of chicken per day, 10kg of rice, and 50 loaves of bread - and even that isn’t always enough,” said Petersen. 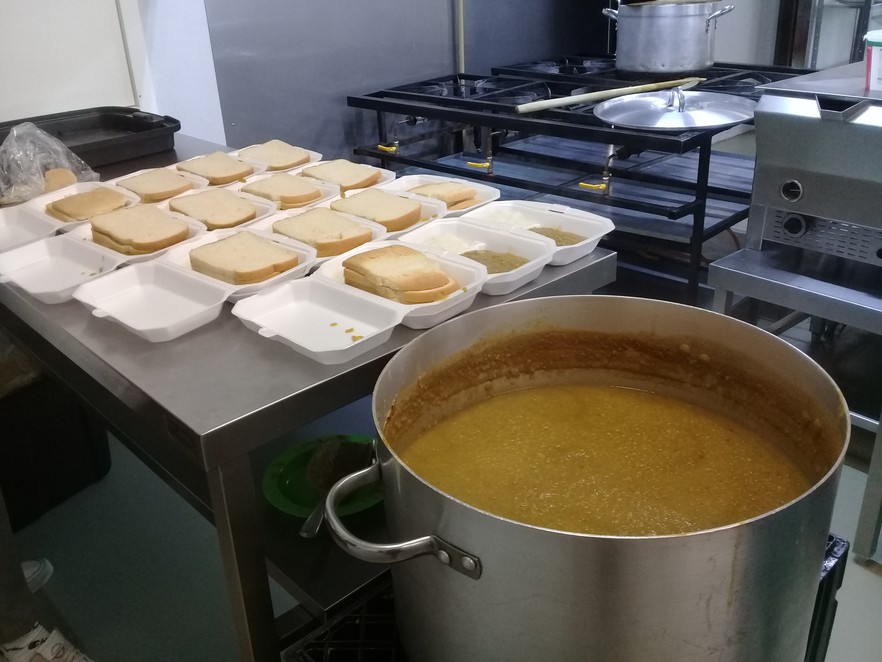 The meals are now served in takeaway containers. Operations manager, Karen Cain, said it takes one and a a half hours longer for staff to prepare and serve meals than it used to.

When GroundUp visited, actor and entertainer Mark Louw was collecting his meal at The Service Dining Rooms for the fifth time. He first came when adjusted level 4 was imposed last week. Louw said when the hard lockdown hit, he found himself without a job and a pension payout as his only source of income.

“Last week I decided to just come and have something to eat. It’s a matter of having to put your pride in your pocket.”

“I decided to just come and stand in the queue to get food. I had to. There was no time to still worry about what people are going to say. It’s not about people, it’s about you. You’re here for yourself. This is a hand up, not a handout. People are getting helped here. They really care for the people they serve.”

Louw said he used to shoot a few commercials, but has not received any filming opportunities through his agency.

“Since we’re in level 4 of lockdown, more people are really desperate with some having to sleep outside because they have nowhere else to stay.”

“I can still go home to a roof over my head, and I’m thankful for that. But at the end of the day you need to put your pride in your pocket, get up and just do what you need to survive. You don’t have to be shy about it,” he said.

Sixty-year-old “Dennis”, who did not want to give his surname, has been living on the streets for more than 17 years, and has been coming to The Service Dining Rooms for meals for the past three years.

“If it wasn’t for this place, most of us would be dead,” he said.

“Most of the food that you get on the street is what we call ‘rocket rice’, it’s not very healthy. But here they really feed you and give good food. The Service Dining Rooms is like going to a hotel in comparison to other places.”

“People tend to look down on us, but they too, with this bad economy, can find themselves homeless at any time. Without these women, where else would we go?”

You can support The Service Dining Rooms via Yoco. GroundUp has no responsibility for how funds are spent.

Next:  Housing for informal settlement near Cape Town airport on hold