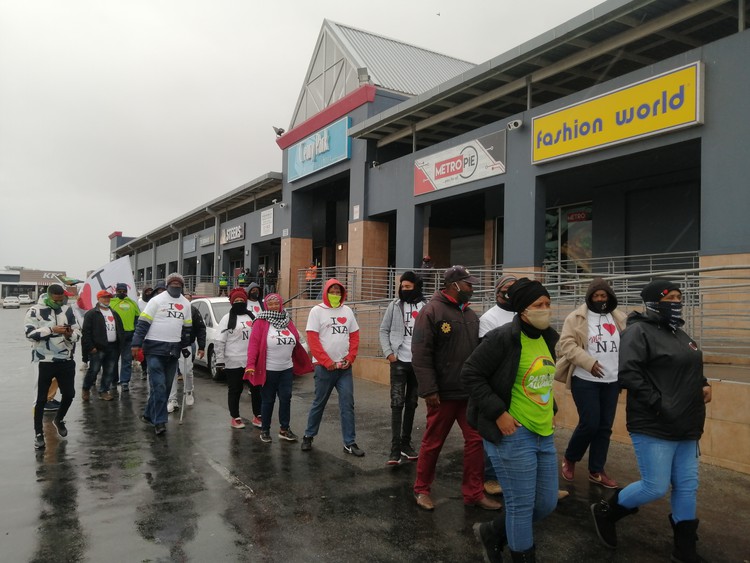 Residents of the Eastern Cape were vigilant and on guard on Tuesday to make sure that their province is not engulfed in the unrest and violence sweeping neighbouring KwaZulu-Natal.

Most shopping malls in Nelson Mandela Bay Metro were operating normally. Security had been increased. The Walmer Park Shopping Centre reception said it was business as usual. Private security guards were visible at the popular Greenacres Shopping Centre.

Eastern Cape MEC for Community Safety Weziwe Tikana-Gxotiwe issued a statement on Monday, saying: “We respect and support the people’s right to protests. But we are pleading with our people to be sensible when they embark on any protest. We are calling on them not to be drawn into any actions that may destroy their livelihoods and potentially pin the masses of our people into deeper poverty in the aftermath of their actions.”

A message – “Eastern Cape Save Our Jobs. We Refuse to Join the Looting. We will defend our Provinces” – circulated on various social media platforms.

At Zonke Spar in Motherwell people were going about their shopping. Resident Lameck Malaika said, “Looting affects all of us. There will be consequences soon as prices of foodstuffs will soar.”

Vusumzi Maswana from Booysens Park, who is disabled, braved the icy cold to camp outside the Cleary Park Shopping Centre in Gqeberha along with other residents, members of the Patriotic Alliance, Northern Alliance and the South African National Taxi Council (SANTACO). By 7am, about 150 people had started patrolling and monitoring the situation at the mall to deter looters.

“My daughter works at Clicks Pharmacy. With her salary, she buys me chronic medication and other household needs. I am here to protect hers and other workers’ jobs,” said Maswana.

Shrina Padayachy from Malabar said, “We decided to stand up after we received a voice note circulating on social media about the potential looting of malls. We will not allow lawlessness to rule in our community.”

“If the centre is closed, the taxi industry loses income as well as car guards, hawkers and employees at the mall. This mall is the only financial hub here.”

“We will work with security guards, taximen and police through our social media groups. We will be here and do our own patrols.”

Neville Stanley from Arcadia said, “We do everything at this shopping center – SASSA, Home Affairs, banks and many families’ salaries come from the jobs at this mall. Looting leaves us in poverty.”

Tiphany Harmse of the Patriotic Alliance said, “Our province has the highest unemployment rate. This pandemic made the situation worse. In solidarity with our communities, we say no looting.”

Ricardo Tromp, chairperson of the Algoa Taxi Association, said they depend on transporting workers and shoppers to and from the malls. “We are monitoring all the malls as SANTACO encouraged us to protect our malls.”

Gabs Mtshala, SANTACO provincial deputy chairperson, said, “We are calling on all our members and drivers to defend those properties and deal decisively with those disturbing our business.”

“Should we allow malls and businesses to be destroyed and closed, we would lose business and our taxis would be repossessed and we’ll never recover from that,” said Mtshala.

Ayanda Kota of the Unemployed Peoples Movement in Makhanda posted a message: “As UPM and Makana Citizens Front, we vow to protect our people and our city. No foreign national shops will be looted under our watch. People will not lose jobs under our watch … People are not going to lose their jobs because of Zuma. Foreign shops will not be looted because of Zuma. Voetsek Zuma and his ANC … We hate corruption. We hate it intensely.”

Eastern Cape Premier Oscar Mabuyane said, “We are inspired by the campaigns that are led by ordinary people on social media to discourage each other from participating in acts of criminality”.

Meanwhile, messages were circulating on WhatsApp calling people to join a “massive strike” in support of Jacob Zuma, who is serving a prison term for his contempt of court and his refusal to testify before the Zondo commission investigating state capture.

Next:  Gauteng clinics looted and destroyed