Cape Town’s dam levels remain very low at 20.9% on 7 May. But a closer look at the data gives the city’s residents reasons to be optimistic for 2019.

In the same week last year the dam levels were 22.4% only 1.5 percentage points higher than now. But a key difference is that the city’s residents use a lot less water now than then. Water use last week averaged 519 million litres per day compared to well over 700 million litres daily at the same time last year.

This shows that Day Zero can be avoided in 2019 if Capetonians continue to use water frugally and the winter rainfall is not significantly lower than last year. But given how unusually low the rainfall was last year over the catchment area, it’s unlikely it will be worse this year. 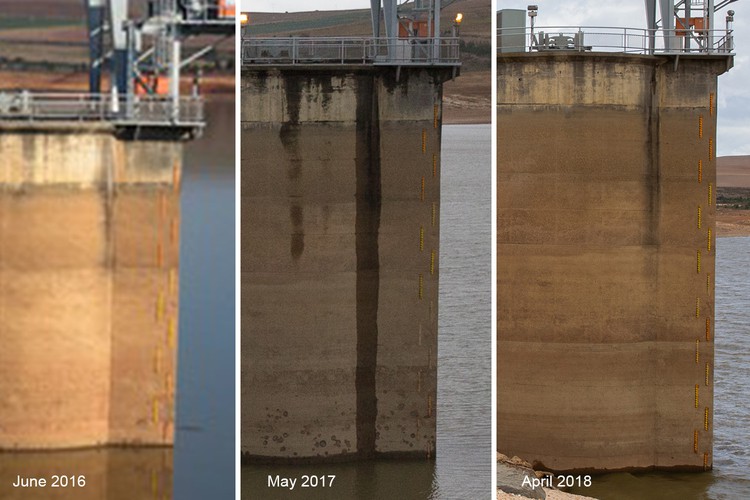 Yellow vertical markers show how the water levels at the Theewaterskloof Dam has dropped over three years (click on image to enlarge). (Unfortunately we do not have photos taken at exactly equivalent periods.) Left photo: Masixole Feni. Centre and right photos: Ashraf Hendricks

Capetonians are using the same amount of municipal water now that they used in the mid 1990s with a much smaller population. While commendable, it’s not sustainable. Besides people becoming tired of the inconvenient measures, the city’s population continues to grow. Most importantly however is that residents in informal settlements by necessity use very little water. But if their lives are to improve, so will their water consumption.

So increasing the supply of water to Cape Town is vital. The City regularly publishes updates on how municipal water is being augmented (added to) by drilling for water in the aquifers (groundwater), desalination, recycling and increasing dam water (surface water). Here are the main measures the City is taking to increase the water supply:

More on the above can be found in this regularly updated City document (last updated 24 April).

Also, UCT scientists estimate that the City could augment the water supply by about 100 million litres daily by clearing alien plants that are preventing water from getting into the dams. A project to do this may also have another benefit: providing employment, albeit temporary, to many of the seasonal farmworkers who have been put out of work because of the drought.

The situation is less rosy for the province’s farms. While Cape Town’s residents have had to adapt to the “new normal” with mostly minor lifestyle changes, Western Cape farmers and farm workers have been hit much worse by the drought (see here and here). The main dams providing water to the farms, Theewaterskloof (11.3% now vs 16.3% same week last year) and Voëlvlei (14.4% vs 18.8%), are at considerably lower levels than last year. Many farms will struggle to survive if the drought continues.