“The dam is now at less than 10% of its capacity,” says farmer

The citrus orchards, which make up the biggest portion of the 140 hectare Fynbos Vrugte en Wyn farm (Fynbos) in Wolseley, have been abandoned. The lemons on the trees are a pitiful size this season.

In the years after its inception in 2007, the farm was heralded as a black economic empowerment success story. The project was initiated by the owner of the land, Louis Lategan, between the Lategans and the Department of Rural Development and Land Reform.

The first grape harvest was in 2015. “Back then we thought this was the best part of the farm, but now just look at it,” said Lategan, scanning the dead vineyards. “All these vines will have to be pulled out now; there’s nothing we can do with them anymore.”

“80 bins of pears were harvested last season; it should have been 240,” said Dempers.

The Department of Rural Development and Land Reform granted 116 black farmworkers R30,862 each to become shareholders in Fynbos in 2007. The beneficiaries were divided into four workers’ trusts, with the farmworkers having 60% of the shareholding, while the Lategan family had 40%. Dempers said there are 88 shareholders remaining as some have passed away or sold their shares.

The board of directors makes the decisions for the farm and is comprised of six black members and four white members, of which Dempers and Lategan are both members. 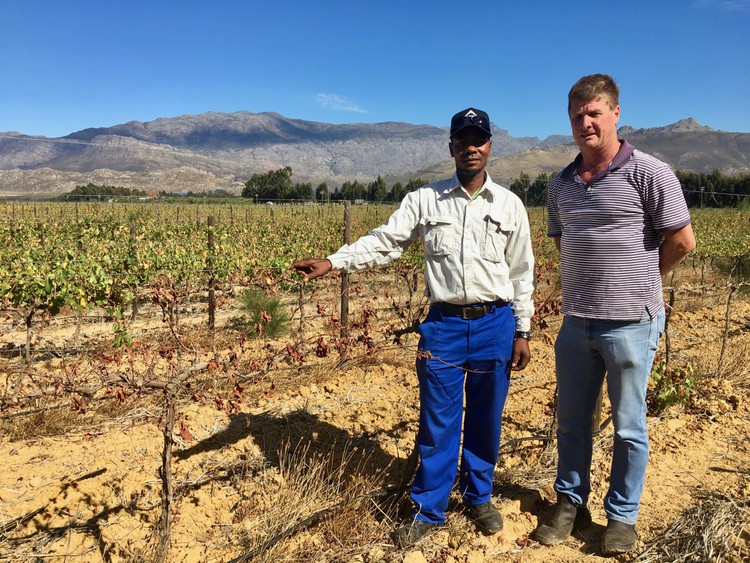 Gert Dempers and Louis Lategan stand in the vineyard on Wolseley Fynbos Vrugte en Wyn farm, which yielded only a third of its harvest this season. The vineyards will probably have to be ripped out.

Dempers is 47 years old and is one of the original 116 beneficiaries. He was the manager of Fynbos from 2010 to 2018, except for four months in 2015. In April he and 21 other workers were retrenched with one week’s salary for every year worked and any leave owed to them. The farm is now eerily quiet.

“I had to finally accept that there is no more farming left to be done here,” said Dempers. “I haven’t got advanced education, but I know the plants and the land. I have learned through many years of experience, and I can see that this land is done.”

“Fynbos just doesn’t have the reserve fat to deal with the drought,” said Lategan. His family have been farming wine and fruit along the Breede River for 150 years. Lategan acted as the mentor of Fynbos, offering the shareholders advice on running the farm.

The farm relied on water from the one-billion-litre Romansrivier Dam located above the farm. “The dam is now at less than 10% of its capacity,” said Lategan. “When I first built the dam in 1999, I thought it was a perfect location for a dam … To see it this low is really painful.”

“When I saw how low the dam was I told [Robert] Graaff we need to drill more boreholes,” said Christi van den Heever, Romansrivier Farm manager. “So we drilled three new ones. Now we have six in operation … If it wasn’t for the boreholes, it would have been a disaster. We did very well this season and it’s all because of the number of boreholes we sunk.”

Fynbos received an allotment of eight million litres from the Romansriver Dam this season. Dempers said the farm had used it up by the first week of January.

“Fynbos has two boreholes,” said Dempers. “One is equipped with a pump and is operational; it provides water for the pears, but it is not enough for the whole farm. The other does not have electricity because Eskom has not installed a power point yet.”

Lategan said the Department helped by providing fertilizer, chemicals and equipment. Dempers feels that although this helped, more could have been done. “If they [Department] knew more about our situation they could have helped us,” he said. 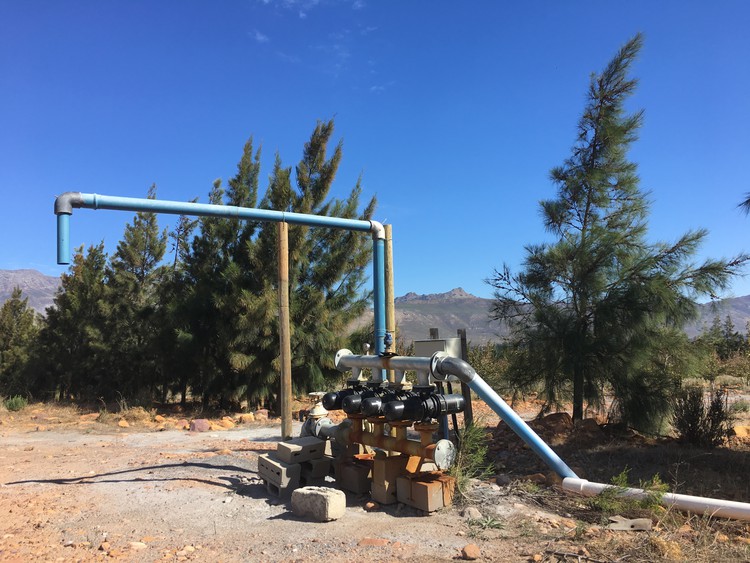 One of the two boreholes on Fynbos. Dempers, the farm’s former manager, said it was sunk in December 2017 but is not operational. He said Eskom has yet to install a power point.

Abraham Julies, also one of the original beneficiaries, complains that as shareholders they were excluded from decision making on the farm. “They make their own decisions without consulting us. I have already made other plans.”

Julies said he left Fynbos in 2011, but he remains a shareholder. He said he had felt pressured at work and eventually resigned. He now works in Ceres at a plant and tool hire service.

Dempers and Julies said shareholders had not received dividends. Lategan said that “the slight profits that have been made were invested back into the farm to improve and expand it”.

Naomi Betana, a paralegal at Witzenberg Rural Development Centre which advises community members about housing and land issues, is sceptical of these shareholder schemes. “The shareholder beneficiaries cannot access trust deeds and finances. There is so much information they don’t have … So they cannot make properly informed decisions about the business,” said Betana.

“The beneficiaries don’t get the education or support they need to make a success of their business … Fynbos is not the first of its kind [to struggle]. The Department and commercial farmers can do more to make equity scheme projects in Witzenberg a success,” said Betana.

Lategan said the directors met with bank officials on 10 April. “We met up with the bank, enquiring whether we could only pay interest for two years before we resume paying off the capital amount. If the bank was not going to allow that, then renting wasn’t an option,” said Lategan. “Two options are available to the farm now; sell the farm or hire it out until farming conditions improve. If neither of these options is attainable, an auction by the bank is inevitable.”

Lategan said Graaff had offered to rent the farm for a period of two years. “I’m still waiting for a draft contract from Robert’s [Graaff] lawyers so that we can consider it,” said Lategan. “I believe the bank will consider a rental contract favourably, but they first have to come and value the farm and then they want to see the lease.”

“I think the farm needs to be inspected and the books looked at,” said Julies, who is convinced that more can be done. “They are just letting our farm go.”

The Western Cape Department of Agriculture did offer some help to Fynbos. “In 2015, we assisted with funding for the establishment of a 7.5 hectare orchard and a borehole was drilled to assist with irrigation water. This borehole is still working,” said Bianca Capazorio, spokesperson for the Western Cape’s Ministry of Economic Opportunities. (This is the one that waters the pears, but it’s not enough water to run the farm.)

“It is sad to see the farm like this. I was involved in everything that was planted on the farm,” said Lategan. “It was an opportunity for the workers and we really wanted to help them utilise the land. We think that commercial agriculture must help the government to achieve transformation goals.”

Dempers, along with some of the other shareholders, now works on a farm owned by Lategan a few kilometres away, Klaarfontein, which is better situated on the banks of the Breede River.

Dempers said he rents out a tractor and bakkie and provides some farmworkers from Fynbos to Klaarfontein to earn a bit of money for Fynbos.

“It was a beautiful farm,” said Dempers. “I left Fynbos with tears in my eyes because of the condition of that farm.”

Next:  Community consent is not needed for mining rights, says lawyer