As dam levels dropped dramatically at the end of 2017 and Cape Town faced the threat of Day Zero, households were forced to pull out all the stops to save water. But Coca-Cola and other industrial users were given a free pass.

An investigation over several months has revealed how Coca-Cola ignored the water-saving regulations and how the City of Cape Town failed to take any action.

In December 2017, the City’s Level 6 water restrictions were published in the provincial gazette, which instructed industry to reduce water consumption to 45% of pre-drought levels, unless higher water use was approved by the City.

But Coca-Cola Peninsula Beverages, the local licensed Coca-Cola manufacturers, did not significantly reduce water consumption until the prospect of Day Zero had faded. At the time, the local Coca-Cola plants were using over 44 million litres of municipal water a month, according to Coca-Cola spokeswoman Priscilla Urquhart. It takes about 1.9 litres of water to make a litre of Coke, according to this independent estimate.

Xanthia Limberg, Cape Town’s Mayoral Committee Member for Water and Waste, revealed in an email to GroundUp that no penalties, or any other punitive measures, were imposed on Coca-Cola, or any other businesses. The City “never took the drastic step of restricting water to any business”, Limberg told GroundUp. Instead, the City had “directly engaged high commercial water users in February 2017, warning them of the need to take steps to reduce consumption”. Coca-Cola was among them, Limberg confirmed.

Yet households that exceeded the 10.5 kiloliters a month quota were punished: fines were issued and water flow was restricted through the installation of Water Management Devices.

But the increased cost of water to big businesses as the drought worsened was 104% - and this charge remained constant no matter how much water they consumed. 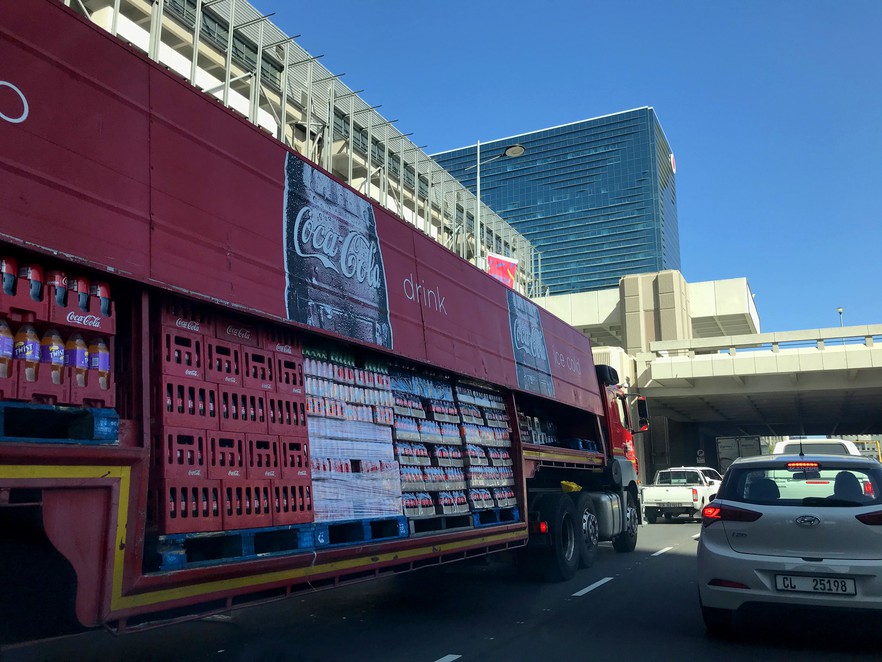 Coca-Cola sank three boreholes to reduce reliance on municipal water early in 2018, Urquhart said in an email in response to questions about the company’s water usage. But the company was only able to use the water when it was granted a Water Use Licence in May that year.

By then, dramatically reduced water consumption by households, and early winter rains, had pushed Day Zero back to 2019.

Since the company obtained its Water Use Licence, the boreholes and unspecified water saving measures had allowed Coca-Cola to reduce its reliance on municipal water by about 25%, Urquhart said. This means the company would have continued to have used at least 405 million litres of municipal water per annum, at a cost of about R12.7 million a year at the reduced post-drought tariff.

Activists turned their attention to Coca-Cola and its water usage in early 2018. On 19 February 2018 a demonstration outside Coke’s Parow plant by the Water Crisis Commission called for the company to halve its production for three months or distribute water free of charge to the City’s poorest communities.

Urquhart said in a widely circulated media release two weeks earlier that Coca-Cola was finalising details to provide millions of litres of relief water to the Western Cape and to the City, provided the company could find alternative water sources to supplement the use of municipal water. In fact the promise was never kept: “In the end, the provision of relief water was not supplied as the Day Zero threat was removed” the company said in a media release in response to questions by GroundUp.

Coca-Cola also said it had bought road tankers to truck water into Cape Town from areas not affected by drought. But these were not used to supplement residential use. Rather they supplied water for large sporting events such as the Cape Town Cycle Tour and Two Oceans Marathon, where Coke erected marketing banners.

Capetonians stand in line to collect water at a natural spring during the water shortages. Photo: Steve Kretzmann

Coca-Cola did help fund the Greater Cape Town Water Fund project to clear alien vegetation, which was sucking water away from the Atlantis aquifer to the north of the city. The company did not state how much money was directed to this project.

Poor and working class households are still paying for the cost of the drought. Following the huge hike in water tariffs in early 2018, many households’ municipal accounts went into arrears, and the City is clawing this back through pre-paid electricity accounts. According to Cape Town’s mayoral committee member for finance, Ian Neilson, prepaid electricity meters are used by the City as a “debt recovery tool”.

Neilson said if a property account was in arrears for services such as water, refuse removal, and sewerage, between 30% and 90% of electricity purchases were used to pay the debt instead of to buy electricity.

Neilson said the percentage paid against debt depends on the municipal property valuation and/or the rate category. Some households in which water management devices are installed have also suffered water cuts if their accounts are in arrears.

But while action was taken against households for excessive water use, according to Limberg no punitive measures were taken against Coca-Cola, or any other industrial users, as the City wanted to protect jobs. According to Coca-Cola’s website, it employs 1,300 people.

Researchers have found that the 2018 restrictions caused significant job losses: 37,000 in the Western Cape. Small businesses suffered under the restrictions and the informal sector was hard hit. Big business, it seems, was protected, while small operators were left to fend for themselves.

The City has failed to provide GroundUp with detailed information on water use by the City’s ten biggest consumers, including Coca Cola.

An application under the Promotion of Access to Information Act (PAIA) request was lodged in November 2019 and just before Christmas, City of Cape Town Deputy Information Officer, Ayanda Mngqinya confirmed the request had been granted in full. At the same time, Mngqinya supplied some of the information requested, but in an unintelligible spreadsheet. Further, equally unintelligible information on the top ten users, was subsequently supplied.

But, despite frequent requests, the request for clarification of this information has still not been provided.

Emails sent to the Mayor of Cape Town, Dan Plato, and the City Manager, Lungelo Mbandazayo — who is also the City’s Information Officer — and other senior officials requesting their intervention, were ignored. A request to the City’s head of communications, Priya Reddy, for assistance was also forwarded to two officials, but they have failed to respond. A subsequent email to her was ignored.

Councillor Xanthia Limberg said the City’s legal advisors had “determined that the detailed information relating to the account cannot be made available to the media”.

As a result, an appeal was lodged on 24 March, 2020, over the failure of the City to hand over all the information granted in the successful PAIA, as well as ignoring a request for clarification of some of the information supplied. Speaker Dirk Smit, who handled the appeal, ruled that “any record which was granted and is still outstanding is to be provided forthwith”.

“It must be noted that councillors are precluded from intervention in the administration except as provided by law,” Smit said.

In his ruling, Smit said it was “disappointing” that the issue had not been resolved after emails to Mbandazayo on 10 February and subsequent complaints of 24 March 2020 to Mbandazayo.

In an email last week Mngqinya said: “Regarding the clarification required on the information contained in my decisions, kindly note that my duty as the deputy information officer is to make decisions on the requests submitted to me such as this one in accordance with the Promotion of Access to information Act 2 of 2000 (PAIA). I have duly made the required decision herein and granted you access to the requested information in full. My duty does not go beyond this point.”

To date the requested clarification has not been received, and no one at the City of Cape Town appears to be taking responsibility for supplying it.

This investigation was developed with the support of the Money Trail Project, JournalismFund.eu and the Fund for Investigative Journalism.