Circus animals: part of a magical world, or the victims of cruelty?

Should wild animals perform in circuses? Yes, if they’re well looked after, says David Mclaren of the Mclaren Circus. No, say animal rights activists: it’s unnecessary and it’s cruel. Ashraf Hendricks went to the circus to talk to both sides.

Caesar is an 11-year-old white male lion. Large and muscular, the magnificent cat walks in confidently. As he arrives, he lets out an earth-shattering roar. But Caesar is not in the wild. He is performing in a circular steel ring inside a large canvas tent, flooded by coloured lights and with a sound system blaring a mix of circus and pop music. On command, Caesar jumps onto pedestals and leaps through hoops to an appreciative audience of about 200 people. Even Caesar’s roar is on time, at the opening of every single show. Welcome to the McLaren Circus.

While the animals have been delighting audiences across South Africa, activists have been protesting weekly, calling for a boycott of the circus.

On 16 March, about 70 people picketed in Wynberg, with placards stating “Animals are not born to perform”, “Your ticket pays for animal abuse” and “This is the saddest show ever”. As cars drove up and customers walked into the venue, some protesters screamed “shame on you” and “don’t abuse animals”. 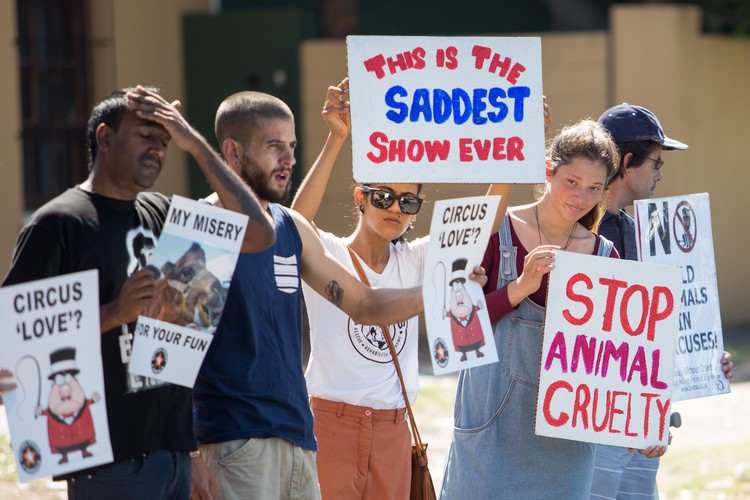 About 70 protesters gather outside the McLaren Circus in Wynberg to protests against its use of animals.

The protests were organised by Beauty Without Cruelty South Africa.

The circus is not a natural space for wild animals, says Beauty without Cruelty’s spokesperson Toni Brockhoven. The animals have no room to run, and because they are constantly travelling “they don’t get to establish their own home territory, which all animals would do” she says.

“I don’t believe that animals should be kept in captivity and in cages. And that’s what a circus is all about.” Van der Spuy says that the animals are being forced to perform tricks “and that’s not what an animal is meant for. The animal is meant to be free”.

After Caesar comes Misty, a rare white Bengal tiger. On command, she lies on the floor like a playful house cat. Michael Jackson’s “Billie Jean” plays and the tiger walks on two legs, performing “The Moonwalk”. The audience, most of whom are children, is delighted. A whip in one hand and a stick in the other, David McLaren, owner of the circus, demands respect from the animals. The whip hits only the ground, but the animals follow obediently.

It’s a dangerous and thrilling act to watch.

Over 40 countries have banned or restricted the use of animals in the circus.

But in South Africa it is not illegal to keep circus animals. The law governing this is the Performing Animals Protection Amendment Act. Circuses have to apply for a licence for every individual animal they keep. There must be properly trained staff to look after them, and there are stringent criteria for how the animals should be looked after. For example, they must have adequate space and be kept in a hygienic, stimulating environment. They must be trained using humane methods. There must also be a vet responsible for the animals. The Department of Agriculture, Forestry and Fisheries is supposed to do an inspection before granting the licence. 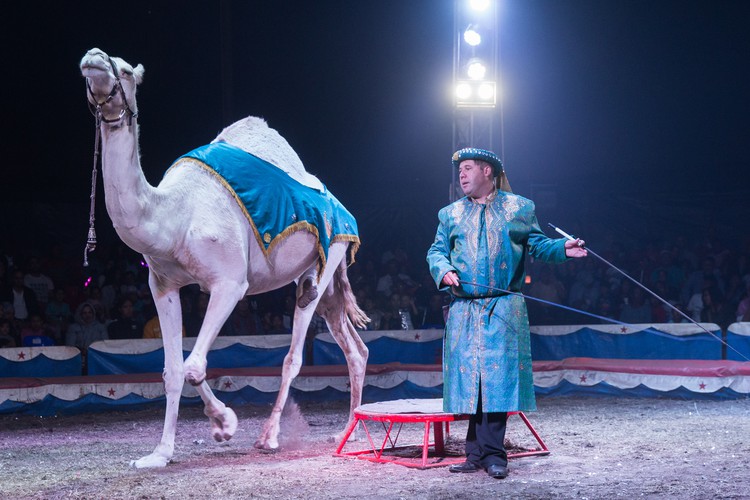 Owner David McLaren performs with a camel. McLaren says that it was a childhood dream of his to open a circus. The circus owns two camels, but at the time of the performance, one was expecting a veterinary visit and did not perform.

McLaren emphasises that the animals in the circus are bred in captivity. Caesar, for example, joined the circus when he was around six weeks old. “When they are born into this environment, they know nothing else,” McLaren says.

“They are hand reared in the circus from a very young age, and they are dependant on their circus caretakers for their welfare,” says Karl Hildebrandt, public relations officer for the circus. “None of our animals are equipped to fend for themselves in the wild and they would never be able to survive.”

As for the travelling, Hildebrandt says the animals have been conditioned to this and are transported in specially built trailers. “At the circus, they are always in a safe environment, they are fed daily and water is always provided.” When the animals are too old to perform, Hildebrandt says, that they are “retired” to the McLarens’ farm. So far, there are two lions on the farm. 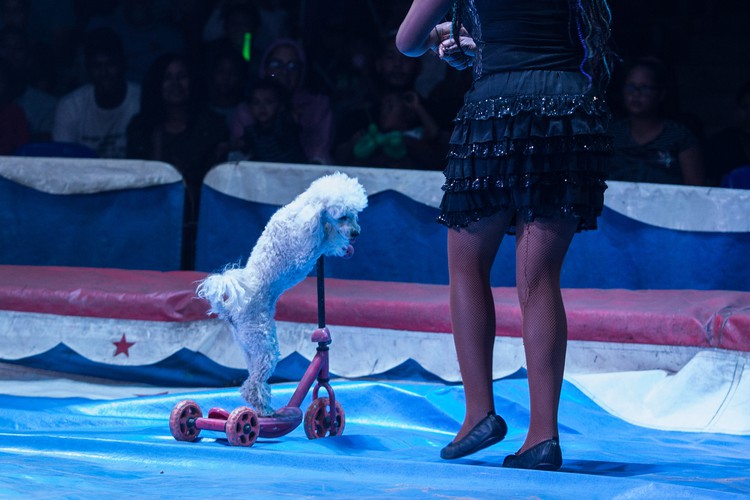 A poodle riding a scooter!

Opening a circus was a childhood dream for McLaren. Established 14 years ago, his is now South Africa’s only travelling circus, employing about 45 people from several countries including Venezuela, Mexico and Brazil. The circus has 30 performing animals including camels, horses, snakes and poodles, one of which rides a scooter. The big cats are one of the main attractions.

For the training, McLaren says that he only uses rewards. “You’ve got to make the animal understand what you want it to do by giving it a reward”, he says.

The SPCA opposes the use of wild animals in circuses, says PR officer Meg Wilson.

Historically, circuses were created so that the public could see these animals, she says, but today, they can be viewed in their natural habitats. “There is simply no need for animals to be in captivity for the privilege of the public seeing these animals. This is strictly entertainment and is completely unnecessary.” said Wilson. “These animals are not given a choice to live like this.” The SPCA also opposes the use of animals in sport.

SPCA officials always inspect the animals’ living conditions when the circus is in town, she says.

“If there’s anything wrong with these animals, the SPCA can go down to the Wynberg Magistrate court”, says McLaren.

Beauty Without Cruelty has been advocating for the removal of animals in the McLaren Circus since 2009. The organisation focuses on the circus, rather than on horse-racing or other forms of entertainment or sport involving animals, because it is aimed at children, Brockhoven says. She says though Beauty Without Cruelty would like all the animals removed, the organisation is willing to compromise with the removal of only the wild animals.

The McLaren Circus invites guests into a “magical world”, and with the death-defying acrobatics, skilled jugglers and clowns, it is exactly that. But should wild animals be part of this world? 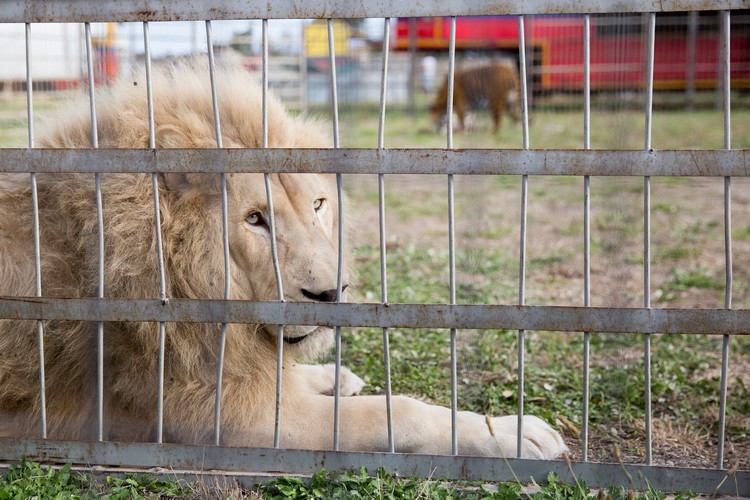 Caesar joined the circus when he was 6 weeks old. He is now 11.

Next:  People with disabilities demand jobs

Previous:  “The municipality is not collecting our rubbish, but they threaten to arrest us if we dump”

Animals caged and used for our amusement

In 2019, I cannot comprehend that there is even a debate as to whether or not animals belong in circuses. It is cruel. No animals belong in cages. No animal - especially wild animals such as Lions - are born to perform for our amusement. They endure abuse in order to be broken and then trained, they are forced into a life that is against everything they belong to. They have to endure the loneliness and confinement that comes with being shunted from place to place.

Nothing anyone does will justify this cruelty, because that is what it is. Why is it still happening in this day and age? We know better now, why are we not doing better? Animals are sentient beings, they deserve better than this. Get people to perform in circuses - acrobats, magicians, clowns. There is no need to take a bear or a lion from the wild and break them for our amusement. No wild animals will perform unless it is broken, and that process is cruel in the extreme. Do not support this. We know better now.

Whilst I agree with everything said by the Activists (Wild animals should not be in tiny cages, should not be taken out of the wild, should not be trained in inhumane ways) I am pertinent that McLaren circus does not do any of the above. Their animals are well looked after, trained by positive reinforcement (like people train dogs, cats and birds) and certainly do not live in small cages.

Make a concerted effort to actually visit the circus and backstage (I am sure David will be all to keen to allow this) to see for yourselves how these animals live before believing everything you hear and read of Facebook. Toni Brockhoven, Jenny (whatever your surname is) and the like - get a life. Stop eating meat, give away your pet dogs, cats and birds and THEN ONLY can you start complaining about McLaren's animals - otherwise you are nothing but hypocritical instigators.