Children with autism excluded from schools 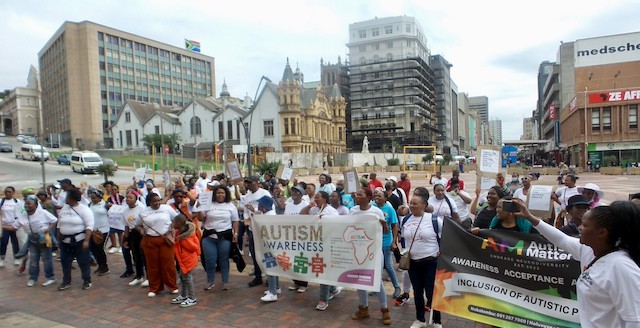 Parents of children with autism picketed outside the Gqeberha City Hall on Friday demanding government responds to a range of welfare and societal issues around autism. Photo: Joseph Chirume.

More than 100 parents of children with autism picketed on Friday outside the Gqeberha City Hall. The demonstrators were members of Autism Matters South Africa, an organisation formed in January 2022 to lobby for the welfare of children affected by autism.

Founder of the group, Nomathembu Qosha, said they fight stigma and advocate for social acceptance and a better understanding of autism.

“We want the Department of Health to diagnose children when they are young, not at five years of age as is the norm,” she said.

Qosha said the main issue is schooling, with long waiting lists for special schools. She said many children don’t go to school until they are adults.

The Quest School is the only government school in the Eastern Cape dedicated to learners with autism.

Nzuki Magwashu, a single mother with a 14-year-old autistic child, tried for years to get her son into Quest. She lives in Zwide and used to pay R1,600 a month for him to attend a special school in Newton Park. She has now found a much cheaper school, but it is also private.

She said Quest School said her son “did not meet their requirements despite him having verbal challenges and other conditions of autism”.

Magwashu said it took her years to convince the Department of Social Development of her son’s condition. He only started receiving a disability grant in 2021.

Parent Xoliswa Siwani has both an autistic daughter and son, aged 10 and 13. They attended preschool but have never been to primary school.

Siwani said she stopped work to look after her children. “I only get a government grant for my son; I am struggling to get a grant for the girl,” said Siwani.

Eastern Cape Department of Education spokesperson Mali Mtima did not respond to our requests for comment.