Union asked for 8.1% while the company is offering 3% 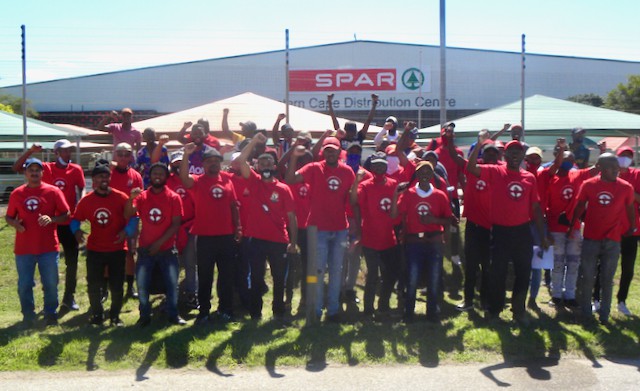 Since Thursday, over 130 workers have been on strike at a Spar distribution centre in Perseverance, Gqeberha (Port Elizabeth). They are demanding an 8.1% pay rise; the employer is offering 3%.

The strikers say their salaries are not on par with colleagues at other Spar distribution franchises.

“Workers are earning a basic salary of R5,300 per month. Our colleagues at other distribution outlets earn a basic of R12,500 per month,” said Berito Juku, provincial organiser for the Transport Retail and General Workers Union (THORN).

“We have already held four meetings with the management and these meetings yielded nothing.”

Juku said the company had announced its total dividend for the 2020 financial year was up 8.1% (to 865 cents per share).

“This was after workers had risked their lives working during the height of the Covid-19 pandemic throughout level one to level five of the lockdown. What we are demanding a piece of that pie. We reject their offer with the contempt it deserves,” said Juku.

Juku said they went to the Commission for Conciliation, Mediation and Arbitration (CCMA) and the strike was protected.

He said they had been prepared to settle for 6%.

Juku said in 25 years there had never been a strike at the centre. THORN established itself last October at the facility. He claimed that union members were being singled out for arbitrary dismissal and the company was promoting non-union members.

“We are hopeful that a decision will be made to end the strike soon, but we can confirm that apart from the blocking of the road leading to the distribution centre, operations have not been affected,” said Swartz

The company did not respond to GroundUp’s questions about the union’s accusation that it was weeding out union members.

Next:  From sounds to hounds: How an opera singer started a dog-washing business in Khayelitsha