Cape Flats communities shut down in protest over lack of policing

“When we call the police, they don’t come, but now they are standing around here just watching us”

By 5am on Tuesday morning, community members from several parts of the Cape Flats came together to close roads in protest against gang violence and crime that has plagued their areas for years.

In Bonteheuwel hundreds of protesters gathered on the corner of Bluegum Street and Jakes Gerwel Drive.

“With all the gang violence, innocent people are being caught in the crossfire,” said Nadia Mayman De Grass, one of the protest organisers. “We have no peace in our community.”

“We cannot face burying our children at this young age. Gangsters are acting with impunity against us. And government is just taking no notice of our plea. We are being told constantly that they don’t have enough resources,” she said.

As the crowd grew, protesters started making their way into Jakes Gerwel Drive blocking traffic and chanting: “Forward we shall march for a better Bonteheuwel.”

A large contingent of law enforcement, including SAPS, Public Order Police, Metro Police and private security, was present. Stun grenades, tear gas and a water cannon were used to disperse the protesters. A handful of protesters reacted by throwing stones and glass bottles but they were quickly restrained by other residents. Several people were arrested, including community leader Henrietta Abraham.

“Where are they [the police] when the shootings happen?” asked Nasleem Cassiem, a Bonteheuwel resident who was tear gassed. “Look at all this police!”

Protesters placed tyres at the Bluegum Street near the entrance to Bonteheuwel but they were stopped from setting them alight by other residents.

On two occasions, small groups of children tried blocking Jakes Gerwel Drive by burning debris but were unsuccessful as most of the protesters opposed this. The debris was quickly removed by police.

Children in Bonteheuwel can’t go to the shops or play in the streets because of gang violence, resident Naziem Dollie told GroundUp. “We are still living under the apartheid philosophy. There’s no freedom really for us. And that is making children frustrated.” Dollie said he was forcefully removed from District Six 50 years ago.

Dollie is one of the many residents who will be filing assault charges against the police. Chris Nissen of the SA Human Rights Commission (SAHRC) arrived to assist them with the charges. 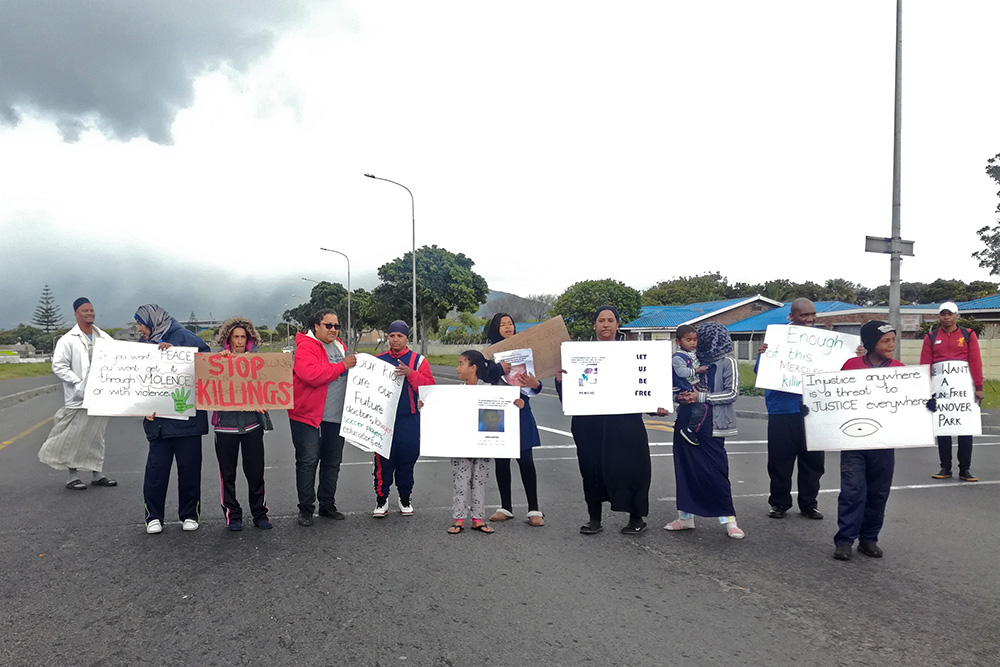 More than 30 residents, including children, blockaded the entrance to Hanover Park at the Turfhall Road intersection in Athlone, on Tuesday morning, holding posters and chanting “enough is enough”. Photo: Barbara Maregele

In Hanover Park, more than 30 residents, including children, closed the intersection at Turfhall Road leading into Hanover Park Avenue. They held placards that read: “Enough of this merciless killing” and “Hanover Park is bleeding”. Several posters had photos of young victims who were shot dead in the area earlier this year.

Resident Rugaya Adams told GroundUp that the most recent shooting between rival gangs happened at Durban Court on Monday evening. “This is why we are out here this morning,” she said. “We’ve had enough of crime. Too many of our children have been killed. When we call the police, they don’t come, but now they are standing around here just watching us.”

Adams is part of a volunteer group that patrols and monitors Turfhall Road every Friday and Saturday between 6 and 8:30pm. “We started the group three years ago because too many people coming from work were getting robbed,” she said. 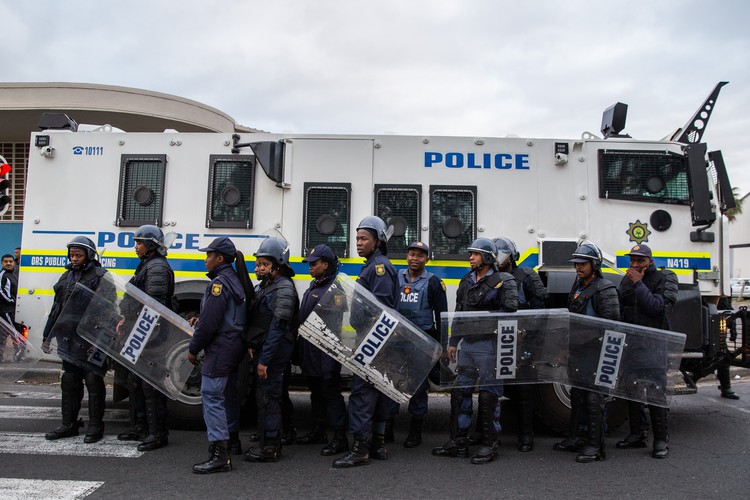 “You have failed the people of Factreton and Kensington” a protester shouted at police, who were out in force to quell protests on the Cape Flats on Tuesday. Photo: Ashraf Hendricks

A small group of about 40 residents gathered along Voortrekker Road in Kensington in the morning. An almost equal number of police were on the scene making sure protesters stayed off the main road.

Some residents were infuriated with the number of police deployed. “You have failed the people of Factreton and Kensington,” a protester shouted at police.

Another protest is expected on 3 October. COSATU has expressed its support for the protests.

Police said they would release a formal statement about the arrests and the shutdown. Earlier in the day SAPS said “eight people were arrested for public violence following run-ins with police that resulted in the disruption of traffic. Stun grenades and rubber bullets were fired in an effort to restore calm”.

Previous:  Damage to West Coast beaches from mining can be kept to “acceptable” levels, say consultants