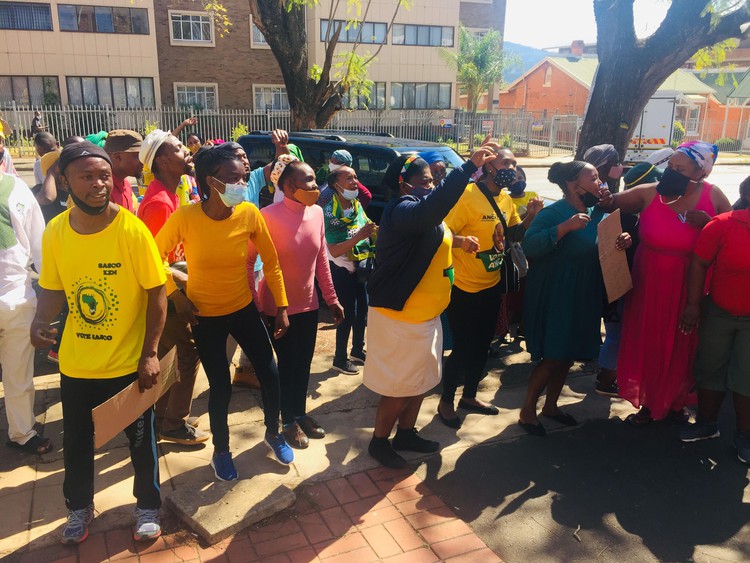 Residents of Willowfontein in Pietermaritzburg marched to the ANC’s Moses Mabhida offices on Monday urging the party to change the list of candidates for the municipal elections. Photo: Nompendulo Ngubane

ANC members in Willowfontein in Pietermaritzburg have threatened not to vote if the party doesn’t change the list of ward councillor candidates for the local government elections.

More than 50 residents protested outside the Moses Mabhida ANC office on Monday demanding that the name of Sibusiso Mkhize, a former ANC ward councillor be removed from the candidate list. Mkhize was the ward councillor from 2007 to 2016. Residents said they want Wandile Sibiya on the list instead.

Two weeks ago the same members marched and submitted their grievances to the ANC office. Among the protesters were elderly and young people who were shouting “We don’t want Mkhize”.

“We are tired of being fed ward councillors,” said Musawenkosi Ngidi, one of the protesters. Ngidi said if there are no changes the ANC should “say goodbye” to ward 14.

“The community totally disagrees with Mkhize being on the list. He was not chosen by the community but the ANC has forcefully elected him. We voted for Sibiya who qualified as the fifth candidate on the list. He is a young person and we trust he can make a difference in our ward,” said Ngidi.

“Their candidate was in power for two terms. He did nothing for the community.” He said the community supported Sibiya.

“There’s been no development in Willowfontein,” said Madoda Goba. “There are no proper roads, water, and some areas are still struggling with electricity. There is nothing we can point to as fruits of democracy. We want change.”

Lesaya Mnguni, 68, said she wants a ward councillor who will listen to elderly people. “I’m part of the protest because I want change. My house is falling down. The road I use is bare. I have had three funerals. Hearses were unable to use the road. People carrying the coffin had to pass in between people’s homes.”

Grace Mhlongo, 71, said she would not cast her vote if the candidate list is not done properly. “I’m an ANC member. I attend all the meetings. I have gained nothing. We have to decide for ourselves what we want, not the ANC. “

ANC Moses Mabhida area coordinator Mandla Zondi said the grievances of the members had been channelled to the provincial office two weeks ago.

“We don’t have a problem with the community of Willowfontein. It is the members who will choose who they want as ward councillor. The decision is made by the people.”

Zondi said he would follow up and respond to the members by Friday.

GroundUp’s attempts to reach Mkhize for comment were unsuccessful. His comment will be added if it is received.

Next:  Mdantsane residents come out in support of vigilantism accused