Too hungry to stay in school, brothers dropped out in grade six 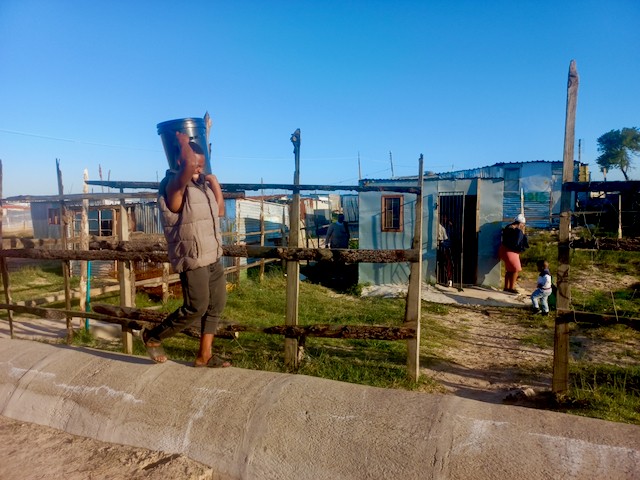 A young man in Driftsands makes a living by charging people R10 to carry their water bucket. Photo: Siphokazi Mnyobe

Twenty-year-old Wandile (not his real name) says he once fainted from hunger. He had not eaten for three days. A neighbour laughed, “thinking I was drunk”, he says.

He and his 17-year-old brother, Mandla (not his real name), make a living by charging people R10 to fetch water. But they can go for days without customers because the community is so poor. At such times, “I know my brother and I will sleep on an empty stomach,” he says.

Both left school in the Eastern Cape in grade six to try and find employment to put bread on the table at home. Mandla attempted to go back to school but says he dropped out again, unable to concentrate because of hunger. Although there was a school feeding scheme, the one meal a day was too small and there was no food on weekends.

Wandile took responsibility for Mandla when he was 16.

“Our mother used to move from one village to another in the Eastern Cape in the middle of the school year. We got behind on school work and had to change schools three to four times a year,” says Wandile.

The boys have different fathers. One is dead and the other plays no role in his son’s life, despite living in Cape Town.

The boys were later raised by their grandparents in Dutywa. The grandparents died in 2018, and the two boys moved to Cape Town in search of their mother in 2019.

Their mother was staying at friends in Qandu Qandu informal settlement in Khayelitsha and had no place of her own. Their mother is apparently collecting Mandla’s social grant, but Mandla is not benefiting from it, which would mean his mother is breaking the law. The boys therefore joined the occupation of land in the Driftsands Nature Reserve during the Covid lockdown in 2020.

Wandile says they staked out a plot but could not afford to buy building materials. Community leaders in Driftsands found them temporary shelter in a local church.

Sibabalwe Mahambi, community leader, says they have other youngsters in similar situations in Driftsands. Mahambi said they provide food for more than 50 families daily at the church. They run collections, get donations from local churches and have help from a non-profit organisation.

The University of Cape Town Children’s Institute’s Children Count report says that while it is not ideal for any child to live without an adult resident, it is positive that more than half (58%) of all children living in child-only households are aged 15 years and above, and a quarter are 17 years old. Only 4% of children in child-headed households are under six years of age. Children can work legally from the age of 15, and from 16 they can obtain an identity document and receive grants on behalf of younger children. Most children in child-only households are not orphans and 84% have a living mother.

The story was updated after publication with information about the boys' fathers and the social grant that Mandla is supposed to benefit from but doesn't.

Next:  Hundreds of organisations swear to defend constitutional democracy