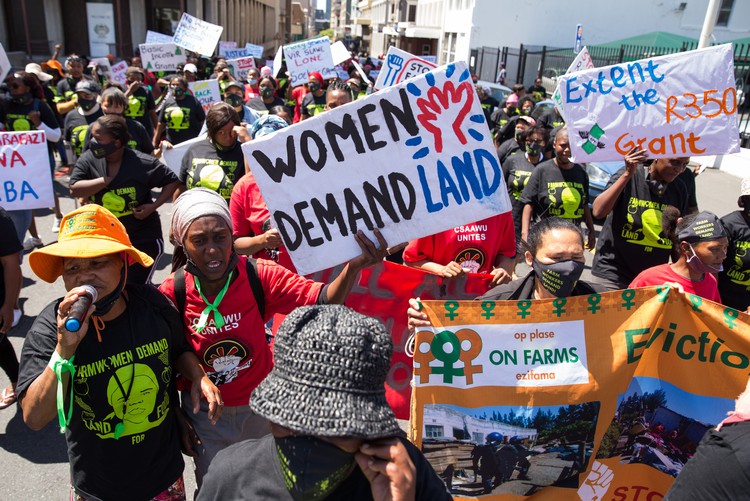 About 150 farm workers and supporters marched to Parliament to hand over a memorandum demanding an urgent meeting with Minister Thoko Didiza on farm women’s land issues and needs. The march was held to mark International Rural Women’s Day and and World Food Day. Photos: Ashraf Hendricks

About 150 farm workers marched from Hanover Street to Parliament in Cape Town on Thursday in response to the Department of Agriculture, Land Reform and Rural Development’s latest land reform strategy.

The march was led by Women on Farms Project (WFP), who are demanding an urgent meeting with Minister of Rural Development and Land Reform Thoko Didiza. They want to discuss the need for land for rural women, an increase in the land reform budget, and the redistribution of unused state farms in the Western Cape.

Since President Cyril Ramaphosa announced a plan for land redistribution in his February State of the Nation Address, 135,117 hectares of land had been released for 275 farms in the Free State, Gauteng, Limpopo, KwaZulu-Natal, Mpumalanga and North West.

On 1 October, Didiza announced that 896 farms (with over 700,000 hectares of unused and vacant state-owned land) would be released to the land reform programme for agricultural purposes.

The land will be distributed in all provinces, except Gauteng and the Western Cape, which Didiza said had no land to advertise.

“The recent land redistribution plan announced by Minister Thoko Didiza provides no hope to farm women in the Western Cape because it specifically excludes the Western Cape,” read the memorandum issued by WFP.

“The decreasing land reform budget also demonstrates that government is not serious about acquiring prime agricultural land for land redistribution for women,” it added.

Co-director of WFP Colette Solomon said that despite the contribution women farmworkers have made towards the success of farms, they are still without land and face job insecurity.

“As long as we depend on farmers for our daily bread we’re always going to be in a position of dependence on farmers. One of the main ways in which we can address that is if we have land. It is the solution to address poverty, inequality and food insecurity.”

“We can’t sit back and expect the government to drop land in our laps. We have to fight for land,” Solomon added.

The march was joined by the Black Sash who together with WFP, launched a petition to demand government introduce a Basic Income Grant of R1,268 for unemployed citizens who are between 18-59 years, and to increase the current Covid-19 Social Relief of Distress grant by R250.

Hoodah Abrahams-Fayker of Black Sash said, “When we lose our jobs the government isn’t there to help. The state has a constitutional obligation to provide financial support to those who can’t provide for themselves. Not because they don’t want to work or because they are lazy, but because there aren’t any jobs available.”

“We don’t want handouts; we need a lifeline,” she added

“As rural women we’re always the last to receive anything. We need the minister to take notice of us and see that farm workers especially farm women are going hungry to bed and there’s no reason for that because there’s a lot of land.”

“We want land now and access to land so that we can build livelihoods for our children and for our families,” she added.

The memorandum was received by Deputy Minister of Rural Development and Land Reform Mcebisi Skwatsha, who said he would convey the message to Didiza and address the concerns raised in the memorandum about the unavailalbilty of state-owned land in the Western Cape. 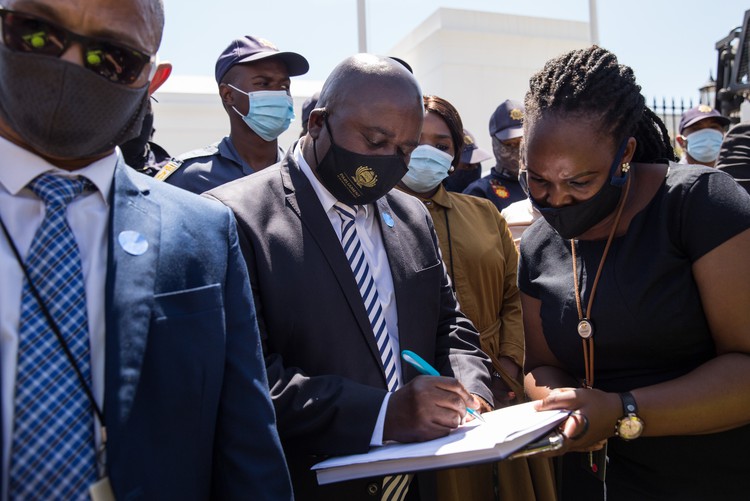 Next:  Makhanda unable to keep up with sewage spills

Previous:  Covid grant extension is a lifeline for asylum seekers