A sewage spill in Extension 9 has been unresolved for months 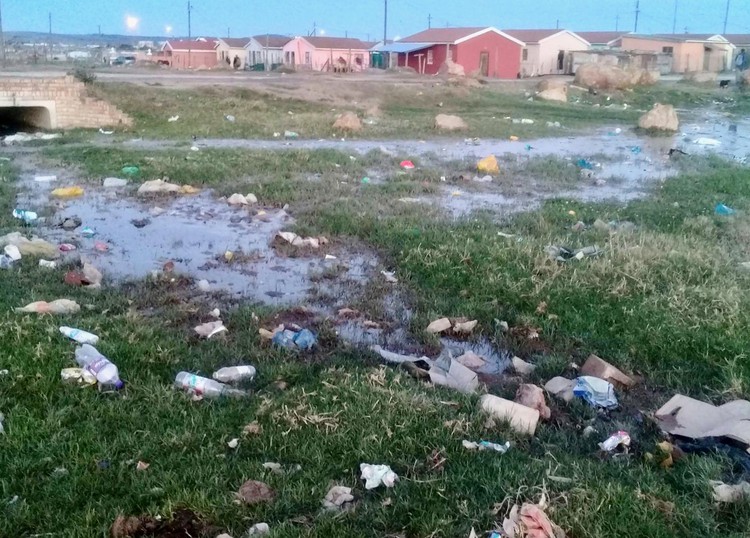 Residents have been complaining about overflowing sewage in Mthathi Street, Makhanda, since March. Photo: Loyiso Dyongman

Residents have been complaining about overflowing sewage in Mthathi Street in Extension 9, Makhanda, since March. The sewage flows down to Transit Camp, an informal settlement formed in the late 1990s.

Malibongwe Duma, who lives nearby, said municipal vehicles drive through the “dam” of sewage every day, but the problem is not fixed.

“It’s an unbearable stench … Sitting inside your house you would smell the stench, making it difficult to eat. We are breathing and inhaling it straight to our lungs,” he said.

“I think everyone here has given up. That is because even if you report to them [Makana Municipality] that will not be followed up,” said Duma.

Sewage is also overflowing in Extension 6, at one place right on a main road. Resident Mzukisi Ngcani said cars have created a new route to bypass the sewage bog. “The municipality is using it all the time too, but does not make a plan to fix this. There is a shop right next to this and we buy here food and groceries,” said Ngcani.

On Wednesday, Makana Municipal Assistant Media and Communications Officer Anele Mjekula said spillages are a result of the disposal of all kinds of objects and substances that are not supposed to be thrown into the system. He said manholes fill-up and sometimes the covers are stolen too. Sludge builds up in the pipes and causes more spillages. Illegal and badly installed connections from informal settlements create bottlenecks and overload the system.

He said the municipality is finding it “hard to keep up” with the amount of blockages and overflows.

But residents claim the problem in Extension 9 is months old and only once did they see municipal workers arrive to fix it.

Mjekula was unable to say at the time of publishing how many times the municipality had attempted to fix the sewage leak in Extension 9, but said the Bulk Sewer Network for Makana Local Municipality is beyond capacity.