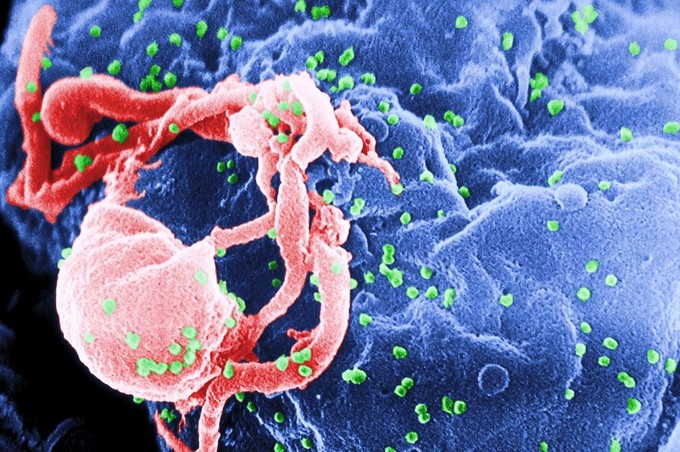 The image is an electron micrograph of HIV (coloured in green) budding from a lymphocyte. Taken by C. Goldsmith for the CDC, via Wikipedia.

Researchers from the HIV Prevention Trials Network have announced a “breakthrough” in the prevention of HIV in women.

The initial results from clinical trials show that an injection once every eight weeks is 90% more effective than taking a daily pill to prevent HIV among women.

The trial was led by Dr Sinead Delany-Moretlwe, director of research at the Reproductive Health and HIV Institute (RHI) at the University of the Witwatersrand.

A comparison was made between a new injectable preventative drug given once every eight weeks (cabotegravir) and a daily pill (oral tenofovir/emtricitabine) currently used for HIV prevention.

Overall, 3,223 women at research sites in Botswana, Eswatini, Kenya, Malawi, South Africa, Uganda, and Zimbabwe took part. 57% of the participants were under the age of 25, the average age of participants was 26 years, 82% were not living with a partner, 55% reported two or more partners in the past month, and 34% reported having a primary partner who is living with HIV or whose HIV status is unknown.

Delany-Moretlwe said during a press conference on Zoom that among all the participants there were 38 HIV infections over 24 months, of which 34 were among the women who were given the pills and four among those who received the injections. She said it is much easier to take an injection, which is discreet, than to take a pill every day.

The injection proved 98% more effective than the pill option, and it is safe to take, she said. After the finding was made last week, the “blinded” phase of the trial, in which neither the participants nor the researchers know who is in which group, was stopped, so that all the study participants could be given the option to switch to the injection.

Delany-Moretlwe said the success of the trial could lead to a reduction in HIV infections worldwide.

In another study earlier this year, the injection taken once every eight weeks was found to be superior to daily oral tenofovir/emtricitabine for HIV prevention among cisgender men and transgender women who have sex with men.

Professor Helen Rees, Executive Director of Wits RHI, said “this is a massive step forward”. She said young women made up a quarter of the 240,000 new HIV infections per year in South Africa “It is a major breakthrough,” Rees said.

The product will not be available immediately because the researchers still need more information. The regulatory approval process requires several steps, including review and approval by the U.S. Food and Drug Administration and other regulatory agencies. The sponsor is the National Institute of Allergy and Infectious Diseases, part of the National Institutes of Health.

The cost will be determined later, said Delany-Moretlwe, but the company which manufactures cabotegravir is committed to making it accessible in low and middle income countries.

Next:  Judge Makhubele is suspended … but still hearing cases

Previous:  Hip-hop artist told he must have a new ID number after Home Affairs mix up