Western Cape could be testing ground for land expropriation without compensation, says minister

“Depending on the attitudes of the farm owners, we might want to test whether this could be a case to consider expropriation without compensation in the Western Cape,” Skwatsha said after visiting the homes of several families facing eviction in Simondium on Monday.

At an indaba on farm evictions hosted by the South African Human Rights Commission in April, Drakenstein municipal manager Lauren Waring acknowledged that the municipality had become “a hotspot for evictions” with an estimated 20,000 people affected by 1,127 pending eviction matters at the time. The Commission said then that it would write to President Cyril Ramaphosa asking for a moratorium on farm evictions.

Last week, more than 200 members of the Women on Farms Project and farmworkers marched to the offices of Agri-Western Cape. They were calling for better wages, an end to forced evictions and harsh punishment for farmers who do not adhere to health and safety regulations.

On Monday, Skwatsha told GroundUp that he had contacted Women on Farms to arrange the visits to the affected households after hearing that thousands of vulnerable people were facing evictions in the area.

“In Parliament we are busy strengthening the legislation around the Extension of Security of Tenure Act (ESTA). What really alarmed me and others in my department was the fact that around 20,000 people are facing eviction in this municipality.”

“Freedom doesn’t come in one day, but we have to force that something is done soon. I came here to listen and I do feel their pain,” he said.

Skwatsha said he would meet farm owners in the area soon to discuss the living conditions and evictions of farm dwellers.

Outside the homes of farm dwellers on an estate in Simondium, Ida Plaatjies told Skwatsha that the new owner would soon install access control gates on the property and had told parents that their adult children were no longer welcome.

“We used to work hard on this farm until we were retrenched in 1999. Nothing happened on the farm for 11 years and most of us couldn’t find work again. Now this farmer wants to evict us. He says our children who were born here can’t stay with us anymore. Where must they go?”

She said living conditions on the estate were getting worse. “We are so many households that have to share these portable toilets so I still use a bucket.”

At Simondium Community Hall Skwatsha heard complaints by farm workers and farm dwellers from across the Western Cape.

Eighteen-year-old Chandre Cloete broke down in tears as she told how her family’s recent eviction from a farm in Soetendal had affected her. “I was on my way home from school when I saw all the trucks and our things outside,” she said.

“The place they moved us to isn’t safe. On the farm we could walk around. Most of us young people don’t go to school anymore,” she said. 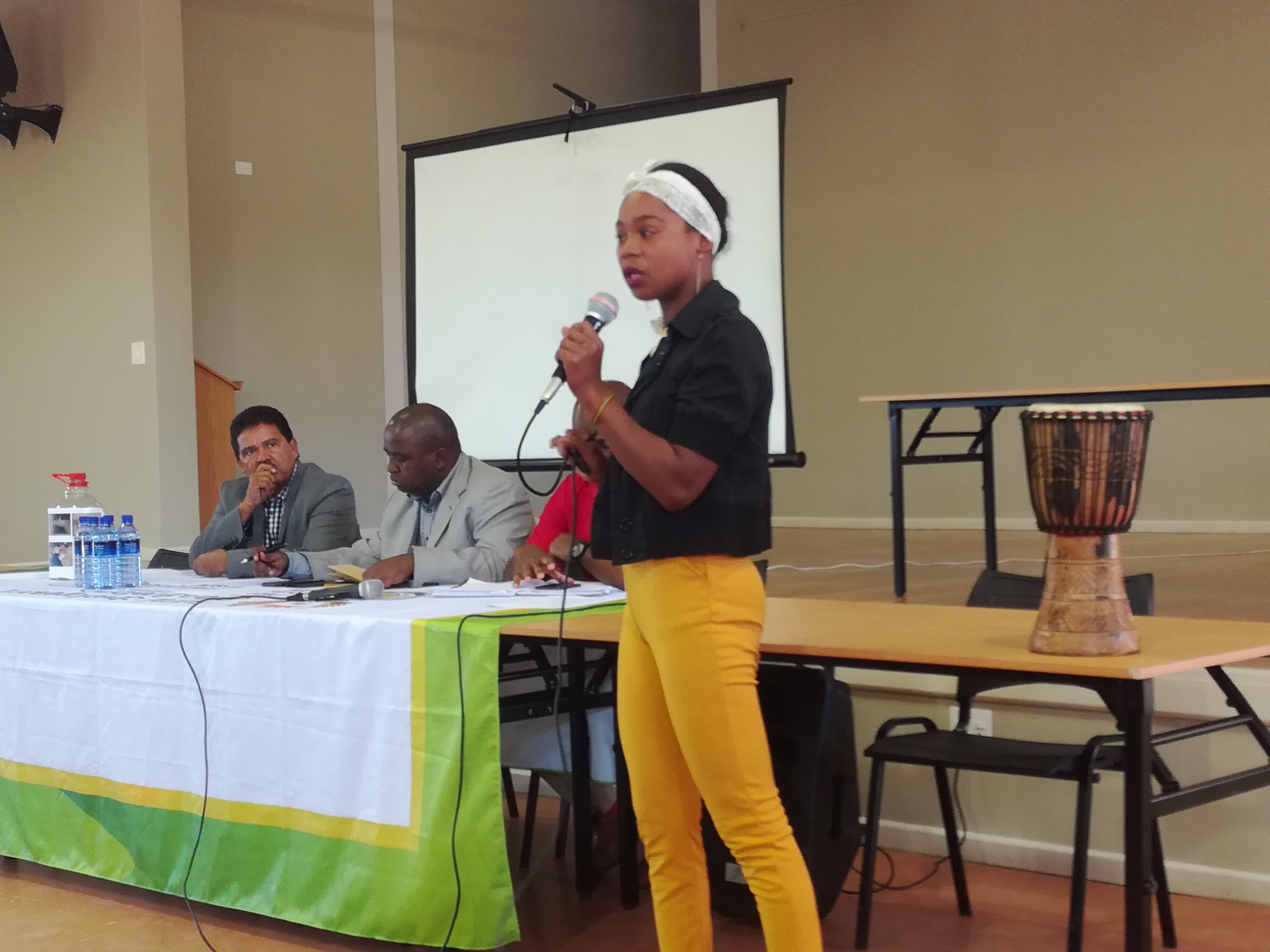 Chandre Cloete told South African Human Rights commissioner Chris Nissen (left) and Deputy Minister Mcebisi Skwatsha how the eviction of her family from the farm where they lived had changed her life. Photo: Barbara Maregele

Elizabeth Domingo from Wolseley said, “I must be out of the house my family has lived in for 44 years in September. ESTA doesn’t work for farmworkers because the farmers are using it to get us out so they can build big guesthouses. It’s not right. I will fight for my land,” she said.

Naomi Betana, a paralegal worker at Witzenberg Rural Development Centre, told Skwatsha that people were tired of waiting and wanted government to intervene as a matter of urgency. She said “the trend” by landowners in Witzenberg was to cut off electricity and water to households in a bid to drive them off the property. “We are tired and on that basis we are going to take land. We need you [Skwatsha] to tell the landowners that we are getting ready and organised to take what belongs to us,” she said.

Next:  Expropriating land without compensation: shack-dwellers have their say