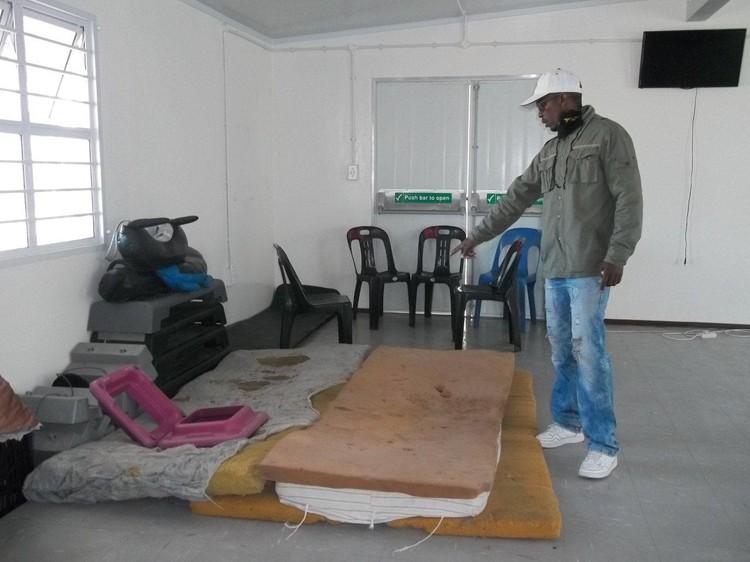 Mzi Sofika points out sponge mattresses which some evictees share at night. He said they hid their blankets and other mattresses because they fear the City will return. Photo: Vincent Lali

Police are monitoring the area near Old Faure Road in Mfuleni where community members have been protesting for houses since Sunday. They were removed from temporary houses in Bosasa, Mfuleni, owned by the City of Cape Town, after having occupied them for a few days.

The temporary houses are meant to accommodate fire victims from Burundi informal settlement and BM section of Khayelitsha. Some of the homes were still without doors, windows, electricity boxes and taps when they were occupied over the weekend.

The group say they slept outside on Sunday and Monday and moved into a small daycare facility in Bosasa on Tuesday night.

On Wednesday, dozens from the group took to the streets at 4am, to block Old Faure Road.

Western Cape police spokesperson Colonel Andre Traut said SAPS members had been deployed to police the protest. “Property and vehicles have been damaged in the area. Cases of malicious damage to property and public violence are being investigated,” he said.

Mzi Sofika, a member of Broader Mfuleni Community, said protesters “vented their anger on the passing bus and burned tyres to force the City to attend to their demands”.

He said that community leaders wanted Mayoral Committee Member for Human Settlements Malusi Booi to participate in a public debate on a local radio station.

Sofika said some of the evictees were still sleeping in the temporary houses to prevent the beneficiaries from Khayelitsha from moving in.

Nteboheng Ramashoai previously stayed with her two kids in Extension Six, where she rented a backyard shack for R600. She recalled having to keep an eye on her belongings outside during heavy rains on Sunday and Monday night.

“My body is filthy because I haven’t washed since Saturday. The Red Ants left with my mattress and bed on Sunday,” she said.

Councillor Malusi Booi said, “The City will continue to act to prevent the illegal occupation as it has a responsibility to the rightful beneficiaries of projects. It also needs to safeguard the housing allocation process and prevent queue-jumping and to protect residents from settling on unsuitable land prone to flooding.”

Next:  Eskom users, fined for bridging electricity, beg to be reconnected