City has condemned the occupation of its Bosasa housing project 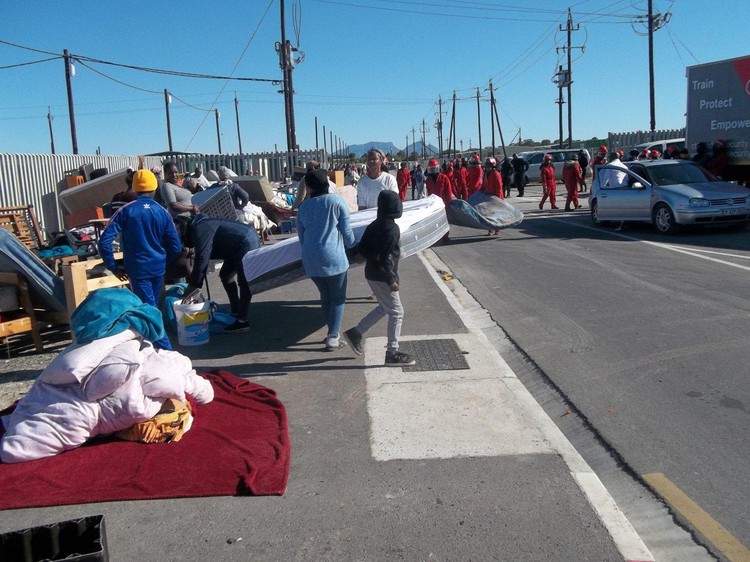 The Red Ants removed hundreds of people who occupied houses in Bosasa, Mfuleni, owned by the City of Cape Town on Sunday. Photo: Vincent Lali

Armed security guards stood watch as the Red Ants removed hundreds of people who occupied houses in Bosasa, Mfuleni, owned by the City of Cape Town on Sunday.

As their belongings were being removed from the houses, residents sang struggle songs and waved placards as they walked past guards.

Community leader Nkokhele Ncambele told GroundUp that the City had no right to evict the residents because they had been living in the temporary houses for about 48 hours.

“We are done negotiating … We will now approach the court to challenge the illegal eviction and would report the eviction to the [SA} Human Rights Commission,” he said.

Ncambele said people had occupied all of the completed houses and some unfinished ones since Friday. “Community leaders clashed with [Mayoral Committee Member for Human Settlements] Malusi Booi on Wednesday when they proposed that he hand over the temporary houses to Mfuleni residents,” he said.

The temporary houses were meant to accommodate fire victims from BM section, Khayelitsha, and residents from other townships. Some of the houses were still without doors, windows, electricity boxes and taps when they were occupied over the weekend.

On Saturday, the occupants were seen covering the windows of the houses with ceiling boards and curtains.

A guard, who witnessed the occupation, said, “People crowded into the yard carrying blankets, kicked the doors down and moved in. We could not do anything to stop them.”

“Mfuleni is not a dumping zone. We also have residents who have been staying in backyards for ages,” he said.

One of the occupiers, Nokuzolo Nkombi, who rented a shack for R450 behind a hostel in Mfuleni, said her shack was riddled with holes, making it cold and wet in winter.

“I could not pay rent because I don’t work. I live off my two kids’ social grants … The temporary house is not complete. I want the City to finish building it as I don’t work,” she said. Nkombi was among the group who wrote down their names or initials on the homes in paint to lay claim to them.

Neli Ganyaza said, “When I arrived here, I stood in front of a house to keep other residents away and to show them that I have already moved in. I endured the cold until morning because I knew that someone else would occupy the house if I ran away and slept somewhere comfortable,” she said.

Councillor Booi condemned the occupation as a “criminal action that prevents rightful beneficiaries from moving into their units”. He confirmed that all 150 completed houses were occupied.

Booi denied that the removal of the occupiers constituted an eviction. “The City cannot allow this group to hijack these units as it is criminal and highly unfair towards the rightful beneficiaries. These were not evictions. They were operations to prevent the illegal occupation of the units by people who are not legal and rightful beneficiaries of the units, as has been determined in an open and transparent manner since the start of this process,” he said.

“It is not acceptable that the Mfuleni leadership is preventing other rightful beneficiaries by taking occupation or by adding beneficiaries for whatever reason. The City said they are not allowed to push through a further 200 people from Ward 16. The City has kept to the original and amended agreement. They are not keeping to the agreement,” Booi said.

“There are allegations that the applicable leadership in Mfuleni have ‘sold’ units to people in Mfuleni. This is illegal and criminal,” he said. 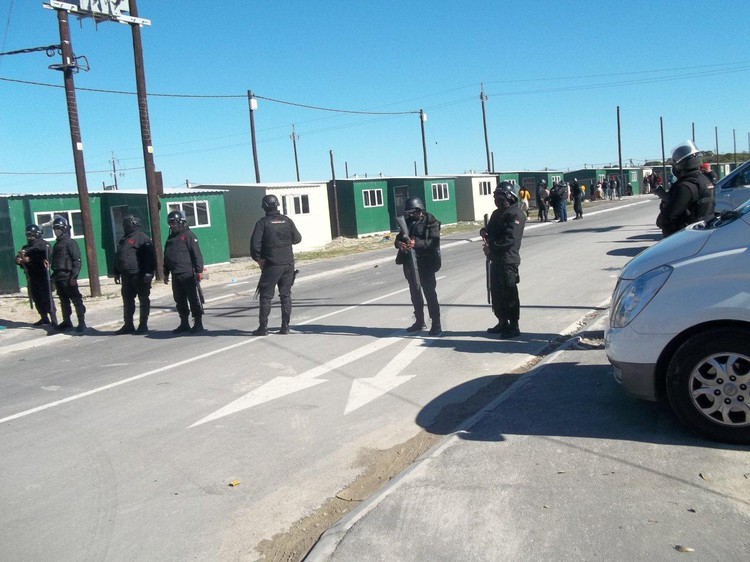 Dozens of guards monitored the area as families and their belongings were removed from temporary units they had occupied at the weekend. Photo: Vincent Lali