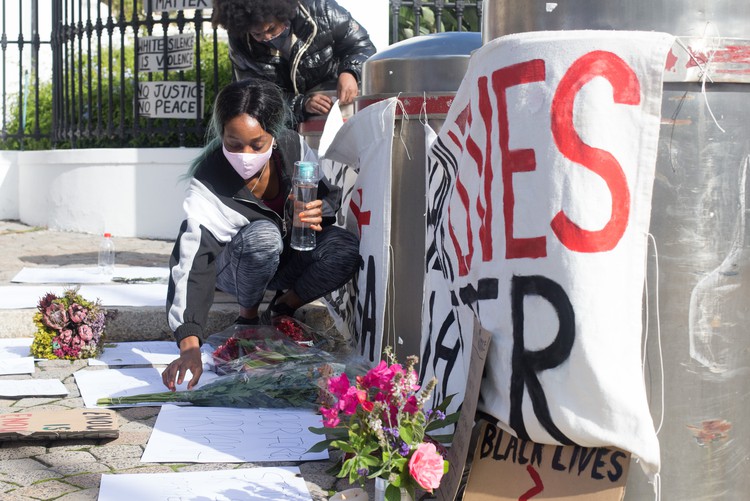 A small protest took place outside Parliament in solidarity with US protests against the killing of George Floyd. Photo: Ashraf Hendricks

Small groups of people trickled past to place flowers and banners in a show of solidarity against police brutality. The protest marked the death of George Floyd at the hands of police in the United States. A video showing Floyd pinned down by a police officer’s knee on his neck went viral, sparking peaceful and violent protests across the US.

Darin Hickman, originally from New York but who has been living in South Africa with his family for 20 years, joined the protest with his family. He said that it was important for them to step up and do something because “they see the injustice”. Hickman said that police brutality was nothing new, but with a cellphone “you can prove that it is happening” and what you’re seeing in the US now is “frustration bubbling over”.

He said it was tough seeing what was happening in his home country from afar. “I feel like I want to do something,” he said.

“I understand where the rage is coming from that drives it [violent protests] and as much as we need to minimise that, we need to stay focused on what the core problem is. And that is systemic racial injustice manifested in policing, court and health systems,” said Hickman.

“We’re just not treated equally and that is what we are fighting for,” said Hickman’s daughter, Tracey. “We feel the effects, we feel the burn and we feel the hurt that everyone else is feeling all over the world.”

Although the protest was in solidarity with the US protests, it had loud echoes in South Africa. “Never forget Marikana” read one placard. Another listed the names of people who have allegedly died from action by South African law enforcement during the lockdown: “We demand justice for Petrus Miggles, Sibusiso Amos, Collins Khosa, Adane Emmanuel, Ntando Sigasa, Robyn Monstuni.”

Comrade Matigari of the Black Solidarity Action Campaign said that they had gathered to show support for those in the US and the families in South Africa that have lost loved ones during lockdown due to police and army brutality.

“We share a common history culturally, and politically. We have suffered the same historical phenomenons of slavery, colonialism, racism and capitalist exploitation,” said Matigari.

Previous:  KZN scrambling to get school with no toilets and water ready for learners