“In this place there is love and care,” says Woodstock hospital occupier

On Sunday, Reclaim the City held a “Meet and Greet” event at the Woodstock Hospital occupation. About 900 people currently living in the building are facing eviction.

This comes after Mayco Member for Human Settlements Councillor Malusi Booi said last week that the City of Cape Town had obtained an interdict to prevent further illegal occupation of Woodstock hospital that began in March 2017. “We have embarked on a process to engage our anti land invasion [unit] in dealing with this particular behaviour,” he said.

On Sunday afternoon, children were running down the corridors and playing. The passages of the former hospital have been named after places in the Cape Town CBD, such as Long Street and Green Market Square. The residents have also renamed the hospital Cissie Gool House.

The occupiers say most of them grew up in the Woodstock area and want to remain close to the city centre where some of them work and their children go to school.

Kevin Saunders said, “I am not going anywhere. If they put me out of here I will sleep at the gate. I am 60-years-old, where must I go?”

Charol Jacobs said she can’t get a house because her husband had benefited from a government house during his previous marriage. The house was sold by the first wife. “The City council told me if I want a house I should divorce my husband,” said Jacobs.

The occupiers are involved in organic gardening, growing leafy vegetables, beetroot and herbs, and running spaza shops that sell groceries to the other occupants.

On Sunday there were also stalls selling cupcakes, koeksisters, hats and plants.

Didi Tshikaya works in a furniture shop in Woodstock. “The City should have mercy. I love this place,” he said. “I have peace of mind because in this place there is love and care. It’s a perfect home for me. … Woodstock is expensive. My wage is [too little] to afford R8,000 for rentals. I need to feed the family and send money home. It’s not easy. There must also be poor people living among rich people.”

Spokesperson for Reclaim the City, Karen Hendricks, said about 300 children and 100 elderly people are living at Cissie Gool House.

She said that the organisation had invited people to visit and experience how the occupants live and sustain themselves and the occupation.

Karen said they have a netball and a soccer team. They participate in tournaments and play against teams from other non profit organisation such as #UniteBehind and Right to Know.

“The coaches of the teams also stay at the hospital. The teams need need balls and sporting equipment,” she said. 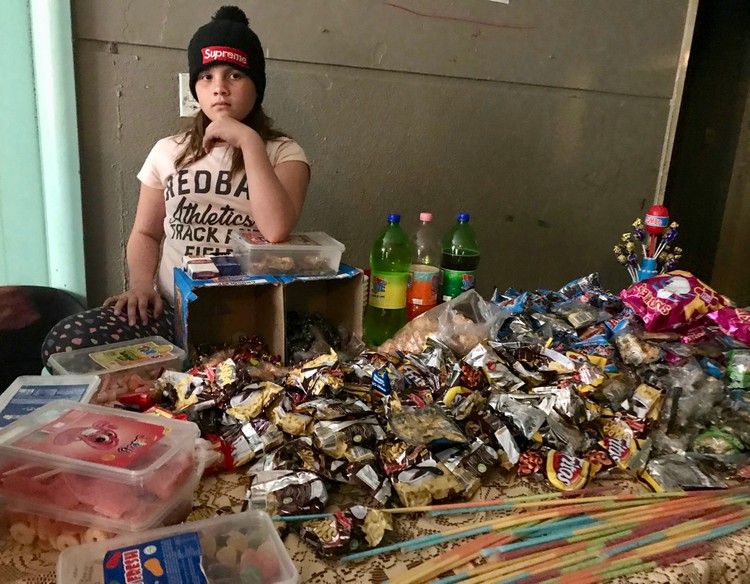 Sadia Abrahams is among eight other families who run spaza shops in the occupation. She runs her shop from her single room. She said her business helps other occupants who don’t have much time to shop.

She sells basic items, such as like salt, cooking oil, sweets and chips. She repackages some basic commodities, such a sugar, into smaller packets for sale.

Her sister sold their family house in Kensington. “I have been on the City’s council housing waiting list for 30 years,” she said.

Dorea Hendricks is a committee member for the occupation’s organic gardening project. She said that the garden is a comforting space for the elderly. She also grows house plants for sale.

On Mondays leaders of the occupation meet. On Wednesdays there is a meeting for all residents. On Thursday nights they have chapter meetings for the outside community. They also teach tenants their rights and the laws around evictions. On Fridays they hold disciplinary hearings chaired by a committee of five people. The committee deals with complaints, problems and grievances. Those sanctioned must do chores around the occupation or do gardening. Criminal matters are referred to the police.

There are also two day care centres. The fees are affordable, especially for the many resident single parents. Elderly residents receive help from Woodstock home-based care. Nurses visit twice a week and check their blood pressure and sugar levels and do exercises with them.

There is a feeding scheme every Friday with cooked meals for the elderly and children.

In a statement Reclaim the City said: “Many of us faced evictions and were displaced as a result of gentrification in Woodstock … We turned an unused building into a place many now call home. We have successfully resisted being forced out of the city by claiming power, sustaining an occupation, building a diverse community and support systems through our leadership structures, gardening projects, children’s creche and feeding schemes.”

I was saddened by your article reporting on the occupation of the former Woodstock Hospital and the plans of the City to again bring in the big guns to evict people who are desperate for accommodation and appear to be a responsible community.

This appears to repeat the history of the Valkenberg Estate where a community congregated in unused buildings, looking after the buildings, the land and each other, producing organic food for the wider community, brought to the neighbouring suburbs by horse cart, making art and providing other services to the surrounding community.

They were similarly harassed by the City. It is unfortunate that we apparently continue to live with city authorities who appear to be unable to cooperate with its communities and enable creative and caring solutions to the many challenges many in our society continue to face.

Thank you for continuing to shine the light into these dark corners.