Raw sewage pools around communal standpipes where residents of Dunoon’s Ethembeni informal settlement collect water for drinking and cooking. There is a stench of faeces and contaminated greywater runs in rivulets through the streets of the informal settlement as residents try to carry on with daily life.

GroundUp visited Ethembeni last week. The communal standpipe is next to a row of blocked toilets. Just metres away women were washing dishes. A young child pushed a broken toy car while other children walked barefoot near the filth. A child eating chips from a packet dropped one into the contaminated water, then picked it up and put it in his mouth.

Community leaders, fearing an outbreak of disease, have on numerous occasions attempted to get hold of the City of Cape Town. They have visited the municipal offices in Parow and Bellville.

They were promised that Expanded Public Works Programme (EPWP) workers would be sourced from the City’s database of job seekers and employed to clean up the area. But nothing has happened in the past year they say and conditions are deteriorating. 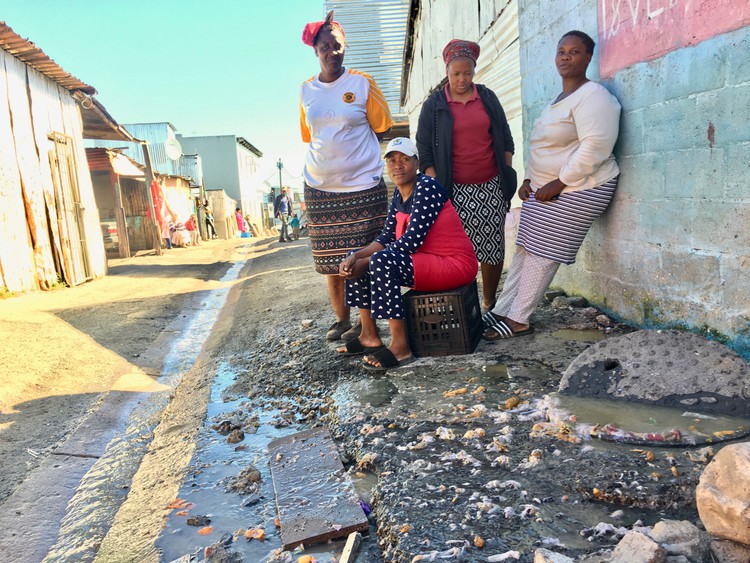 Ethembeni informal settlement residents Nobuhle Tinti, Sandiswa Dayimane, Zukiswa Gidiminisana, and Nozuko Matyhile next to a broken manhole cover spilling out raw sewage which runs past their feet. They say the situation is normal for them as their complaints to the City have been in vain. Photo: Peter Luhanga

Resident Sandiswa Dayimane asked why the City provided flush toilets but did not employ anyone to look after them. He said they haven’t been cleaned for almost two years.

“Our toilets don’t flush. We collect water in a bucket and pour it in the toilet to push the faeces down, but instead they overflow as the toilets are blocked,” she said.

Residents relieved themselves in buckets at night, and then discard the contents into storm water drains, before rinsing the containers out at the communal standpipes.

Just outside the entrance to Zukiswa Mazwe’s shack is a blocked drain from which storm water contaminated with faeces and urine overflows.

Mazwe said he no longer prepares food at home but buys it from street vendors and eats it there, only going home to sleep.

“The stench is inescapable … I walk past the faeces to get inside my house… The faeces gets stuck on my shoes,” he says.

Community leader Zukiswa Gidiminisana said residents used to club together and donate R5 per family to buy toilet cleaning detergents and clean the toilets themselves. But families are now struggling to come up with even R5 a week and the initiative ground to a halt.

Mayco member for water and waste Councillor Xanthea Limberg said the appointment of a new set of janitors to work at Ethembeni informal settlement was “slightly” delayed due to details such as addresses of applicants on the job-seekers database being inaccurate or out of date at the time of recruiting.

One of the requirements of the programme is that janitors employed to work in specific areas are residents of that particular informal settlement.

Limberg said the problem has been resolved and the new janitors will be on the ground, equipped with cleaning chemicals, tools and protective clothing provided by the City as part of the EPWP.

“The City would like to apologise for any inconvenience caused by this delay. It is important to note, however, that the janitorial service is a top-up cleaning service, and all residents have an important role to play in protecting the reticulation network from blockages by disposing of materials such as rags, condoms, rubble, etc. in bags and/or bins,” said Limberg. 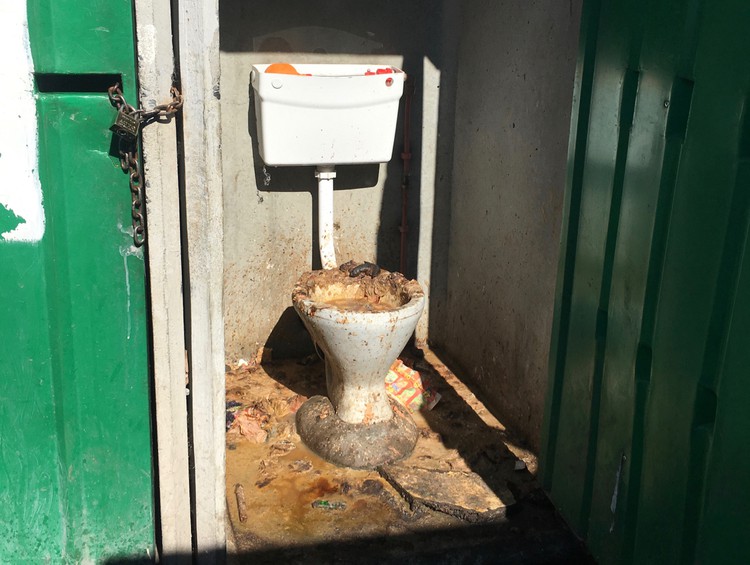 One of the blocked flush toilets catering for thousands of residents in the Ethembeni informal settlement, Dunoon. Photo: Peter Luhanga

Next:  Toilets unserviced for months in Khayelitsha

Previous:  “We turned an unused building into a place many now call home”