“We share classes with cows,” says a grade-12 learner. “Cows have become our classmates. We are used to it.”

The learner at Isibanesihle High School in Sweetwaters, Pietermaritzburg, said learners had protested about the conditions in the school in 2015 and again two weeks ago, but to no avail.

According to a teacher, the school has 200 learners. They pay a R100 fee per annum.

A grade-12 learner said, “Our text books get wet. When it’s windy, we get cold. We can’t focus at all. Learning has to stop. Not a single item is in good condition in this school.”

A teacher told GroundUp, “The situation became worse during the final exam period last year. That is when the department [of education] promised to attend to the matter soon … Nothing has been done. We are used to it. Some of the learners are now leaving the school. It is really bad.” 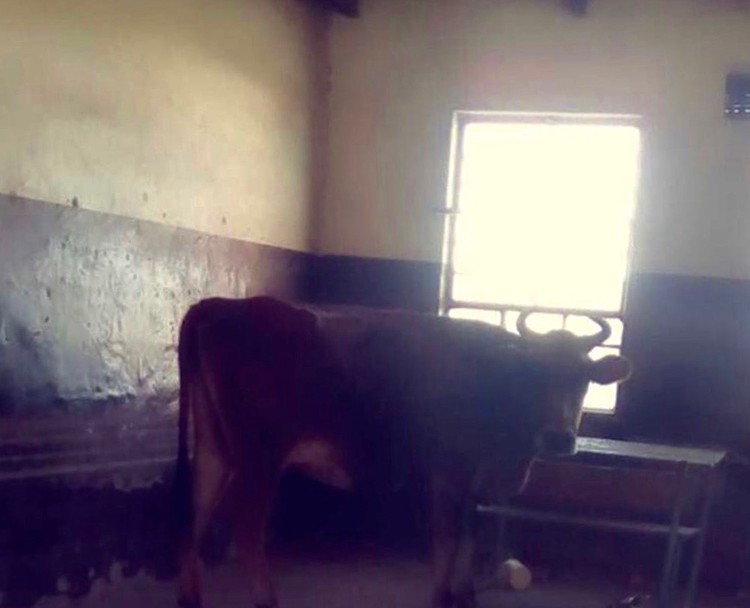 A cow in one of the classrooms at Isibanesihle High School in Sweetwaters in Mgwagwa, Pietermartizburg. The photo was taken by a teacher at the school.

A learner who enrolled at the school in 2014 said things have been getting worse. “One cannot change a sanitary towel with an open toilet door … If one goes to the toilet, one learner has to hold the door. It is hard. We thought when we return this year the school would have been fixed. There is cow dung inside the classrooms,” said the learner.

Another learner said, “When it rains, teachers don’t come to the classrooms. They just send work for us to do … How can we learn for ourselves?” she asked.

Spokesperson for the Department of Education Kwazi Mthethwa said, “The matter should be reported to the right people not to the media. We work on what has been planned, not what the media has said.”