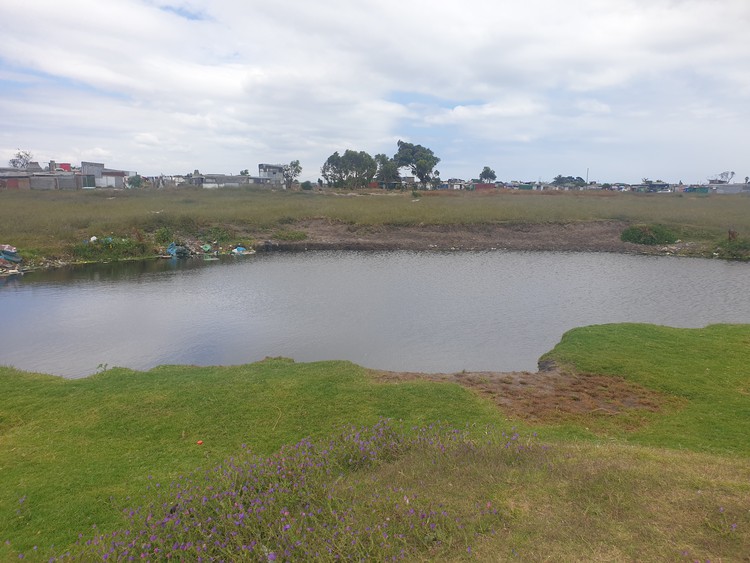 Earlier this month 11-year-old Gershwin Visser drowned in this dam near his home in Philippi. Photo: Mary-Anne Gontsana

Covid-19 lockdown has hit the NSRI’s schools programme, with less than half the planned number of children getting water safety lessons this year ahead of the holiday season.

“Our water safety instructors could not teach for most of the year,” said NSRI spokesperson Craig Lambinon. “We managed to teach before lockdown in March and after Level 1 was declared. This year we had hoped to reach 600,000 children with our water safety lessons. But due to Covid-19 we were only able to reach 165,464 children.”

The programme, run by full-time employees and taught in several languages, teaches water safety in the sea and in inland waters.

Lambinon said the NSRI was also launching a Survival Swimming programme to teach children four skills to help them survive in water: breath control, orientation, floating and how to move through the water for at least five metres. “During the pilot phase we have taught 151 children these skills and plan to roll the free lessons out in KZN, Eastern Cape, Gauteng and the Western Cape in 2021,” he said.

Earlier this month an 11-year-old boy drowned in a dam in Egoli informal settlement in Philippi, while swimming with friends.

Lambinon said the instructors taught children the dangers of “peer rescue”. He said well-meaning people who swam out to help someone who was drowning could also drown if they were grabbed by someone in a panic. “This can end up as a wrestling match in the water and when this happens it can result in the ‘rescuer’ and the patient drowning.”

As a result, he said, the NSRI had launched the “Pink Rescue Buoy campaign” in 2017. Buoys were stationed around the coastline and on inland waters to be thrown to a person who is drowning to help them float while rescue services are called.

“We advise would-be rescuers who are not trained, not to go into the water. Rather call for help (the emergency numbers are on the pink buoy signs) and then throw the pink buoy to the person who is in difficulty. If someone decides, against advice, to go into the water to help someone a pink buoy will help them to float. NSRI has over 820 pink rescue buoys deployed and have recorded at least 68 people rescued using a pink buoy,” said Lambinon.

He said they taught children to make homemade “buoys” as an exercise to reinforce the lesson that it was dangerous to go into the water to help someone and that it would be safer to throw out something that floats, such as a three litre plastic container.

Lambinon urged holidaymakers not to swim where there are no lifeguards on duty.

The NSRI has 1,500 volunteers stationed at 43 coastal and inland rescue stations, on duty 24 hours a day.

Next:  Woodstock facilities falling into ruin