Molemole shut down by protesters angered by municipal water bills 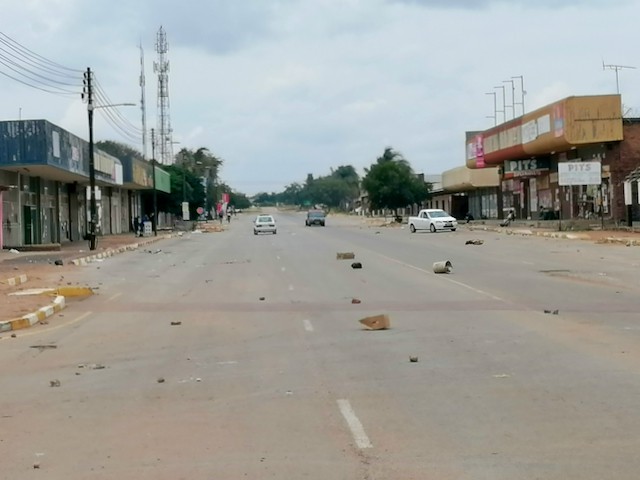 On Monday, Molemole, north of Polokwane, Limpopo, was a ghost town. The streets were deserted and shops, businesses and banks were closed ahead of expected protests.

More than 100 protesters from Dendron gathered from 5am to block roads leading to the town centre. Later, protesters marched from the taxi rank to the office of the Mayor of Molemole Municipality.

In the memorandum, the community demanded the provision of drinking water to all households and the scrapping of debt on services since 2017 because the municipality has not rendered basic services other than dustbin collection.

Thomas Mudau, a community leader, said the municipality had not honoured an agreement it had reached with the community years ago.

Handwritten minutes of a meeting held in 2 September 2019 with the mayor and municipal manager, suggest that it was agreed that the municipality would not disconnect electricity for non-payment of water bills, that existing bills would be scrapped, that a flat rate would be introduced until water services were properly restored.

Water supply has been intermittent and often not at all since 2012, according to residents.

But the major unhappiness remains around residents distrusting the billing system.

“We have not seen any officials walking around to take water readings for the month but surprisingly we get billed every month,” said Nare Makgoka.

Makgoka said there are Jojo tanks dotted around the villages which are rarely filled. Individuals have therefore drilled boreholes and sell the water.

Frank Molele said he stopped paying his bills in 2016 because he was double-billed. “The first bill comes in the name of my wife and myself; the other one comes in my name,” said Molele.

He showed GroundUp two bills for the same physical address from March 2020 - one for R91,694 and another for R29,186. “As from the beginning of this month the municipality blocked my electricity card. I can no longer buy electricity. This is done to make me pay, but where am I going to get that amount?” said Molele.

Currently his family is using firewood for cooking.

The memo was signed by Mayor Edward Paya. He refused to address the protesters, but told the community leaders he will respond in seven days. He was whisked away by police and private security guards.

Molemole municipality spokesperson Ma’sforo Mashegoana said the mayor would respond after a council sitting on 29 March.

The municipality issued a statement saying: “Generally the residents of Mogwadi [Dendron] receive clean water supply on regular basis except when there is a breakdown.” The statement also said Capricorn District Municipality, which is the water services authority, had handed over a bulk water supply project for Molemole on 22 February.

But Mudau says the bulk water supply is not working properly and over 1,000 households are still struggling to get tap water.

In a statement, Councillor Calvin Matjee (DA) accused the municipality of an “irregular water billing system” “after overwhelming complaints by the residents of Mogwadi who were paying for water they are not receiving for over a year”.

“The DA conducted an oversight, only to confirm that the taps in Mogwadi were bone dry … Residents of Mogwadi are suffering without the access of water that they have paid for and there are growing concerns around hygiene and health concerns,” Matjee stated.

“The municipality only connected water pipes from the dam to the old water pipelines … and they called this a the bulk water project,” said Matjee.

Next:  Father can’t get money from sale of his house until he pays child maintenance, judge rules

Previous:  In Fort Beaufort the children eat fish caught next to the sewage pipe