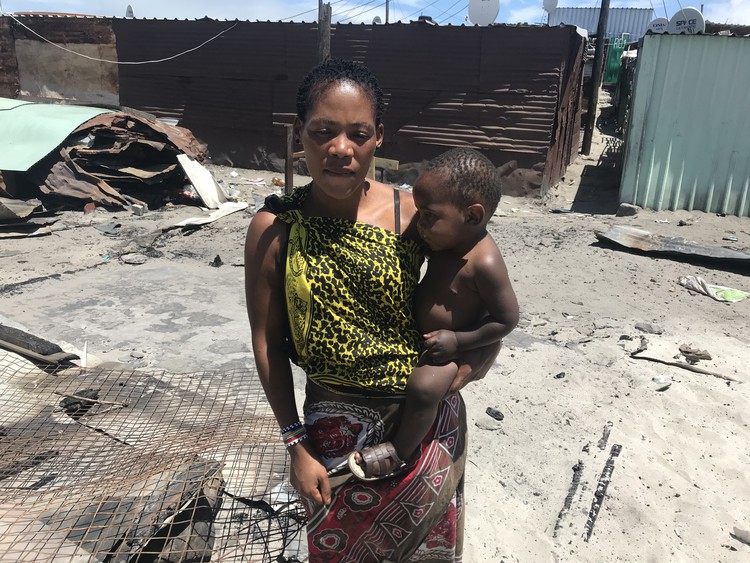 Vrygrond resident Zozo Nongomso and her baby lost everything when their shack burnt down last week. They are among 30 families who have been sleeping outside since the fire because they don’t have money to buy material to rebuild. Photo: Tariro Washinyira

About 30 families in Overcome informal settlement near Vrygrond, Cape Town, have been sleeping outside for nearly two weeks after a fire destroyed their shacks on 6 January.

The residents, most of whom are unemployed, say they have no money to buy material to rebuild their homes. The City of Cape Town announced last month that it would no longer supply emergency kits, which included building material, to victims of fires and flooding. The City will now only assist victims of incidents which have been formally declared a disaster.

On Tuesday, about five of the 30 families managed to rebuild with used material they collected since the blaze. The settlement, established in 2001, has no electricity and many people use gas for cooking.

Holding her small child in her arms, Zozo Nongomso said she had lost everything in the fire. “We only have the clothes we are wearing. Sleeping outside hungry with children is difficult. What is stressing many of us is where we will get money to buy textbooks, uniforms and stationery when schools open,” she said.

Community leader Portia Arosi, 38, has lived in Overcome since 2006. She is a single mother of two and is unemployed.

“I lost everything including two beds, fridge and two couches. We are sleeping outside. I can’t rebuild the house because I don’t have material. I am desperate. A friend gave me the clothes I am wearing,” she said.

Secretary of the Vrygrond Community Development Forum Nonkosi Fodo said: “The fire victims were sitting around the fire during the night when criminals appeared and demanded zinc. A woman was shot while fighting for her used material which the criminals made off with. Community leaders were denied access to Groot Schuur hospital because of Covid-19 lockdown regulations.”

Arosi said that the woman was discharged on Wednesday and is recovering at a relative’s home.

National Department of Human Settlements spokesperson McIntosh Polela said that the National Rapid Response Team would go back to Overcome on Friday. “Gift of the Givers is currently assisting with among others, feeding the affected community members.”

Malusi Booi, Mayoral Committee Member for Human Settlements, said that the City, in collaboration with the national government, would consider ways to assist the families.

Previous:  A pandemic is no time for austerity, says vaccine coalition