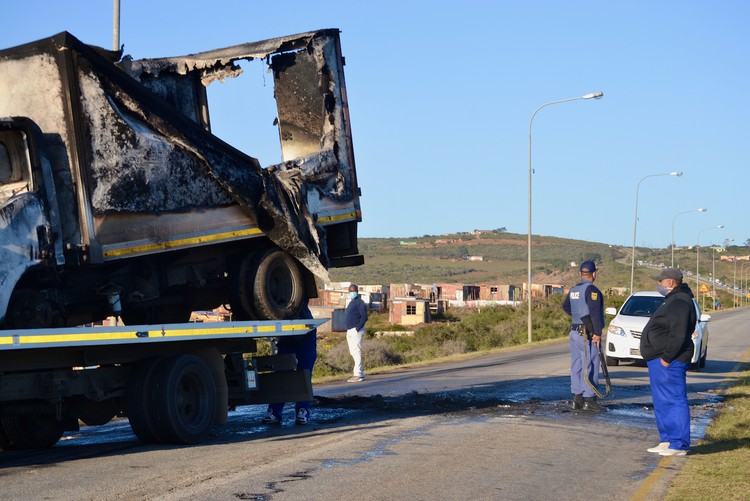 Traffic was disrupted on Rocklands Road as protesters burnt a bread truck in Uitenhage on Tuesday morning. Photo: Thamsanqa Mbovane

The protesters blew whistles in the early hours to wake up residents and went from shack to shack, telling those who did not want to join the demonstration that they will not be given a toilet if the protest is successful.

“They said I will relieve myself in the bush … for the rest of my life … if I drag my feet, so I decided to join them because I also need a toilet,” said Andile Memani.

With over 3,000 shacks, Bobani Village is the biggest informal settlement in Uitenhage. Residents are waiting for 846 toilets to be built in a Covid-19 related municipal plan. But the construction had been stopped.

Vaughn Naidoo was driving the bread truck from Port Elizabeth to Rosedale spaza shops near KwaLanga when he was stopped by protesters and surrounded.

All 66 crates, about 600 loaves of bread were looted and Naidoo’s two mobile phones stolen.

“I had to walk away and saw them burning the truck,” he said.

Ward 45 Councillor Siphiwo Plaatjies (ANC) said the delay in constructing the toilets and “everything” in the village was because there were “peace talks” in a secret location between area 11 committees, the first committee of seven members, who fled the area, the current committee leaders and municipal officials.

Plaatjies said, “Tomorrow at 11am we will be there with the main contractor who will build the toilets. The delay was not caused by the municipality.”

Police spokesperson Captain Andre Beetge said a bread truck and a breakdown truck were torched. He described it as “a hit and run protest”. No arrests were made. He said police are monitoring the situation.

Next:  OUTA lays fraud and racketeering complaint over Lottery grants