“We called them the Mugabes because they refused to step down” 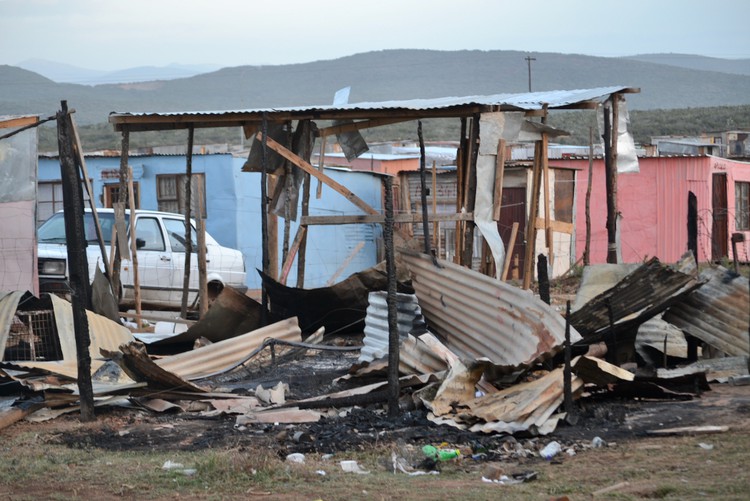 Sangoma Mbhobhothuvi’s shack at R Alexander Street, Bobani Village, was torched by angry residents because of his association with the seven committee members who had to flee the informal settlement. Photo: Thamsanqa Mbovane

Two weeks ago seven committee members of Bobani Village in Gunguluza, Uitenhage, fled the informal settlement and have gone into hiding. Their shacks were burnt and torn down.

This came after the chairman of a street meeting was stabbed. One of his attackers, who apparently confessed that they’d been sent by the committee members, was beaten to death.

There had been ten on the committee, and three agreed to step down.

“We called them the Mugabes, because they said they will rule until Jesus Christ returns and they refused to step down,” said resident Phumla Moss.

She said the stabbing incident had triggered the current tensions and instability in the informal settlement of 3,000 shacks.

“Four men, who did not even hide their faces, came and charged at the guy and stabbed him repeatedly, until he collapsed,” said Moss.

“Our chair is still alive … We are looking forward to having him as our new leader in the village,” she said.

Police spokesperson Sergeant Majola Nkohli said no cases of arson had been opened and did not confirm that a case of murder had been opened. GroundUp was shown a photo of the dead man with a police vehicle clearly visible.

Residents said the seven committee members, who led the land occupation in January last year, had been behind the closing down of schools and roads and disrupting the memorial service for ANC Councillor Bicks Ndoni. Ward committee member Xolani Williams said he had been stabbed in the hand by one of the former leaders.

They are also accused of selling plots to spaza shop owners for R1,500 each and of forcing shack owners to pay R10 when they needed money for meetings or to hire a car.

On S Mane Street, the shack of committee leader Nkosikhona (who would not reveal his surname) lies in ruins. Next to it, the shack of his sister, Nomgqusho, is also just rubble. On R Alexander Street lie the burnt ruins of the shack of sangoma Mbhobhothuvi, who often hosted the committee members’ meetings. Five shacks were burnt down with their furniture inside.

Asked about allegations that they sold six plots to a spaza shop businessman, Nkosikhona said, “Tell them it’s incorrect to say R1, 500; it’s R3, 000 and siyityile imali (we did eat that money).”

Ward 45 Councillor Siphiwo Plaatjies (ANC) said it was illegal to sell or rent out plots. He said the village had been formed by “land invaders” on municipal land and as such his office could not get involved in electing or dissolving its committees. But, he said, “We will work with any committee that is elected by the residents that they want to introduce to my office.”

Next:  Three months in prison for trying to recycle waste during lockdown

Twenty arrested after shops of foreign nationals looted and torched

Fined for going to a clinic during lockdown