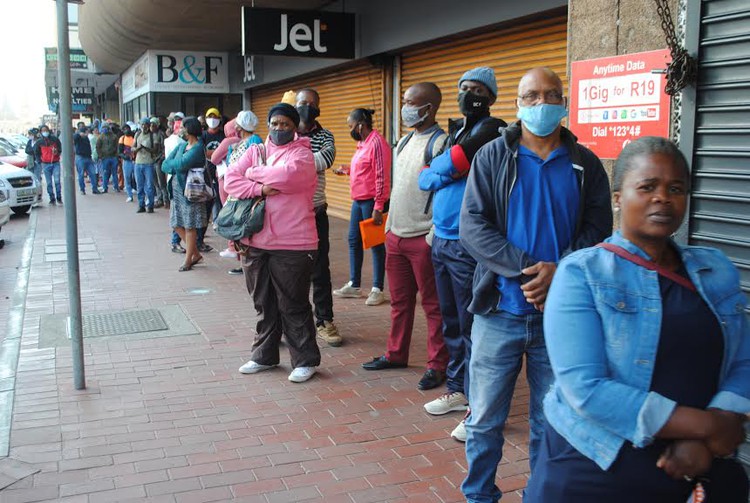 UIF queue outside the offices of the Department of Labour in Port Elizabeth. Photo: Mkhuseli Sizani

Hundreds of Unemployment Insurance (UIF) applicants say they are breaking the curfew because of frustration and poor service at the Port Elizabeth Department of Labour. As early as 3am they queue outside the offices in order to be among the first 200 applicants that the department serves daily.

They accuse officials of spending too much time on long breaks and of dragging their feet to get overtime. But the department says the delays are because it is taking precautionary measures against the spread of Covid-19.

On Monday and Tuesday GroundUp visited the offices early in the morning. By 5:30am there was already a long queue in front of the shops in Govan Mbeki Avenue where the offices are situated. The queue of about 400 people was winding up to Donkin Street. Some were sitting on camp chairs, wrapped in blankets; others were waiting in their vehicles. The shop owners were battling to move them away from shop entrances.

The curfew announced by President Cyril Ramaphosa is in force from 9pm to 5am. But people in the queue said they had no choice but to break the rule.

Mncedi Mgidini, from Fairview Informal Settlement, a former Dippin Blu Race Course groom, said on Monday: “I left my house at 3:30am and walked all the way to Greenbushes to catch a taxi. I got here at 4:40am but I was turned back home because I was number 208 in the queue. I lost my job in February and I have been surviving by selling my goats. But since the prohibition of traditional gatherings I can’t sell them. I have two dependents and this UIF is my only hope.”

Ntombizanele Ngquba from Zwide said: “I am queuing for my mother who is 60. We left home at 4am and walked down to Missionvale to catch a taxi. Luckily we are number 198 on the queue. On Friday we were turned back home although the 200 people were served by 1pm.

“The office opens at 7:30am. But when they want overtime they close at 6pm instead of 4:00pm. There are 20 counters and many of them remain empty for hours.”

A woman who did not want to give her name, said: “This is my fifth time standing in this queue since October. The service has been poor here and queues are not properly managed. Some of us are old but we stand for long hours and we are not even provided with marked chairs to sit on. There is no social distancing at all.” 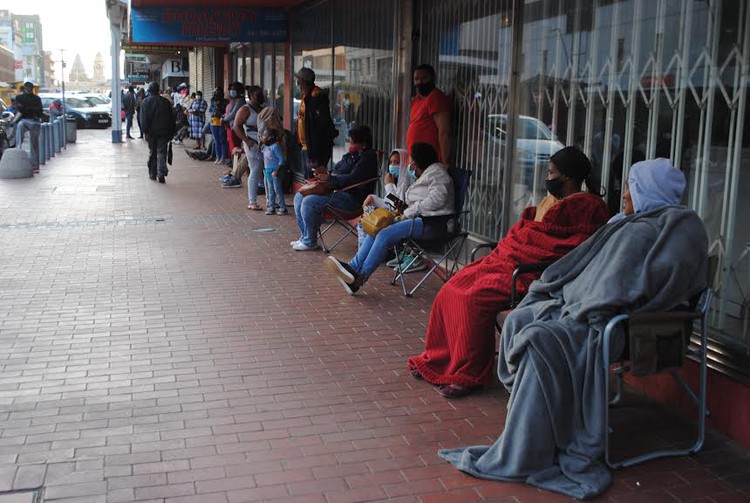 Some applicants bring chairs and wrap themselves in blankets against the early morning cold. Photo: Mkhuseli Sizani

Department spokesperson Ziphozihle Josefu said that 200 tickets are printed as a “precautionary measure” against Covid-19.

She said that the UIF Head Office has developed a system that will be implemented on 30 January that will allow clients to check the status of their claims on their cell phones using USSD. She also said the department will increase the number of staff.

“In the meantime all departmental offices in the provinces will also re-direct more officials to assist our clients at our visiting points and do queue marshalling,” she said.

Next:  Filthy train station has been cleaned … but not by PRASA