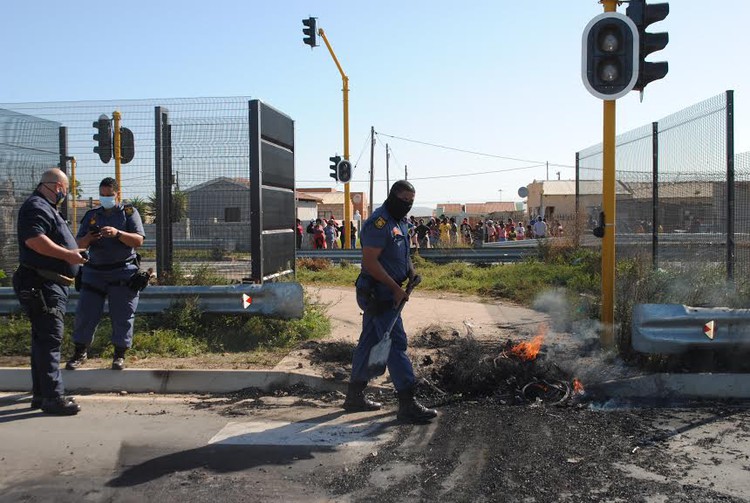 Violence erupted in Port Elizabeth on Monday over electricity connections to Bayland informal settlement. Residents of the settlement threw stones at owners of RDP houses in neighbouring Joe Slovo who had helped the municipality strip out the illegal connections. Public Order Police were called in.

The anger erupted when Joe Slovo residents called the Nelson Mandela Bay Municipality to cut off illegal electricity connections from the poles in their area.

Unathi Nyangwa of Joe Slovo said, “Since Saturday we had no electricity. The municipal workers said our continuous electricity problems were caused by these illegal connections. We assisted the municipal workers in removing these cables from the Bayland side. But those residents came out in big numbers carrying sticks and pelted us with stones. They also demanded that we give them back their cables but we refused. They got very angry and burnt tyres on the road.”

Nyangwa said she was threatened. “I don’t feel safe anymore because these people are threatening to kill me and another community leader for complaining about the damages being caused by these illegal connections.”

“One of the electric poles where these people connect is in front of my house and my electric box always trips. We have lost many of our appliances because of these izinyoka [illegal electricity connections]. Both my fridge and TV plasma were damaged. This weekend was very hot and our meat is rotting in our fridges.”

Bayland, across the R75 Uitenhage Road from Joe Slovo, was settled four years ago by backyarders from Joe Slovo and has grown rapidly as people from other areas also moved in. Today there are 2,000 families, according to community leader Mandilakhe Camagu. Residents have held several protests on the R75 demanding electricity.

Camagu said Bayland’s fight was directed at the municipality, not Joe Slovo residents.

“For three years we have been protesting for electricity and some of our leaders were arrested during those protests. The municipal officials are aware of our problems. Many new informal settlements in Motherwell have electricity. But this municipality is quick to cut off our izinyoka connections instead of electrifying our shacks.”

“We are not fighting against the Joe Slovo community and we are not connecting directly from their homes. We will show this municipality the flames if it keeps on cutting off our cables.”

Bayland resident Mputumi Mtanda said, “Since last year we have been connecting illegally after this municipality failed to give us electricity. Most of us here are unemployed and we survive on social grants. Paraffin is too expensive. Many use wood fires to cook outside and these open fires are a huge risk to our congested shacks.”

Municipal spokesperson Mthubanzi Mniki said mayoral committee member for Electricity and Energy Luxolo Namatte would, “meet the affected residents within a two week period from now” and “challenges of electrical outages will be attended to.”