The university says there are over 1,600 students with debt, amounting to R88 million 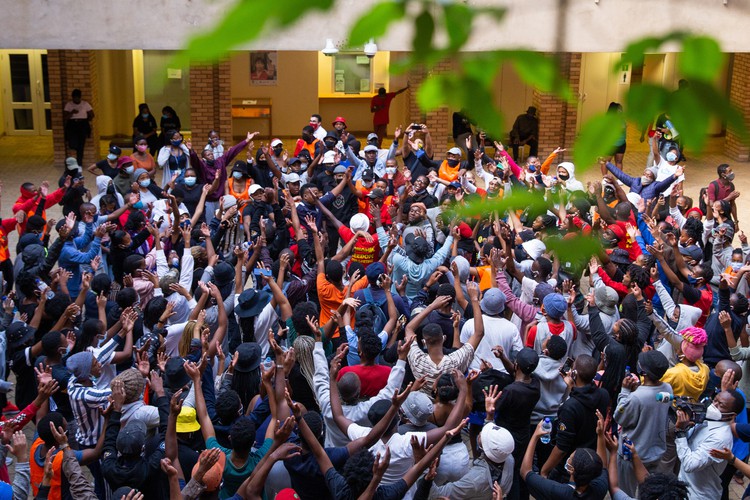 Over 150 UCT students protested in the Kramer Law Building on Friday against the financial exclusion of those who are unable to pay fees or who have historic debt. Photo: Ashraf Hendricks

Students from the University of Cape Town (UCT) began gathering to protest against “financial exclusion” from about 6am on Friday. By 10am, the group marched to the Kramer Law building on Middle Campus where the crowd grew to over 150 people.

Addressing the protesters over a loudhailer, Students Representative Council (SRC) President Declan Dyer said, “This is now the student centre. We will occupy Kramer”. He said they chose the Kramer building because it was also the headquarters of UCT’s financial aid and student housing offices.

This follows protests by students of Wits University in Johannesburg this week.

Dyer said they were protesting in solidarity with the “2,500 students who are being financially excluded” from UCT. Dyer said they will call the vice-chancellor and management to address them.

Mila Zibi, of the residence council, warned that the group would remain in the building until management met them to “give us a way forward”.

He said that some students had already graduated but could not get their transcripts due to the fee issue. This, he said, makes them “unemployable because they don’t have something that says that these people have graduated.” He said that they want students’ debt to be cleared and for them to be allowed to register.

Zibi said that another issue they wanted addressed was for the withdrawn offers for student residences to be reversed. He said that the most affected are “poor black students” who don’t have access to wifi or food. “The university must pressure the government to make sure that there are funds to register these students,” he said.

Zibi is a returning student, and although his student finances are secure, he said it was important to show solidarity. “We are here to fight for other students … it’s not fine for a few of us to have rights” and “if we do not stop it now, it might happen to us as well,” he said.

In a statement Elijah Moholola, spokesperson for UCT, said that they are aware of the issues raised by the students. He said that “UCT has set aside around R30 million” to assist eligible students with historic debt.

“The university has about 1,655 students with historic debt, amounting to R88 million,” said the statement. UCT was “awaiting NSFAS funding decisions for 2021 applicants”.

Moholola added, “UCT does not charge any registration fee. Students can register without having to make any payment, including the minimum initial payment.”

Next:  MPs row over Lottery board selection