All students must be allowed to register, regardless of debt, say Wits protesters

The university has previously said that only students who have less than R10,000 debt could register 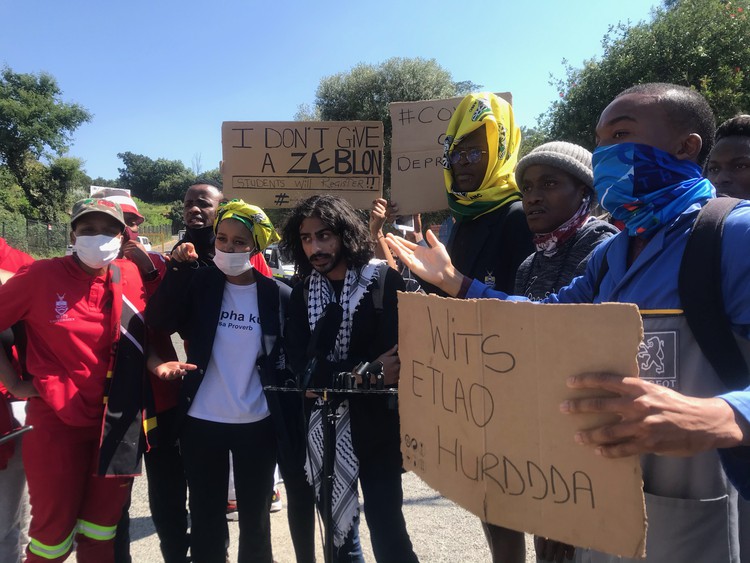 Students at the University of the Witwatersrand and the Central Johannesburg College in Parktown protested on Tuesday, demanding that all students be allowed to register, regardless of how much they owe in fees. Photo: Masego Mafata

About 50 students gathered outside the Central Johannesburg College (CJC) in Parktown on Tuesday.

Earlier in the day, the group were moved by police from Empire Road where they had been protesting.

The protests on Empire Road were organised by students from the University of the Witwatersrand (Wits) and led by its Student Representative Council (SRC). The students are demanding that the university allow all students to register, regardless of their debt records.

“Every year we have the same issues. We have to break the shackle of debt. This is not isolated to Wits, it’s a national issue,” said Raees Noorbhai, a member of the Wits Coalition for Free Education.

While no memorandum was handed over on Tuesday, students complained that they had previously submitted memos which proved fruitless. The most recent memo was signed by various student councils and societies and submitted to the Dean of Students on 1 March 2021, they said.

The students also want the university to put pressure on the government for a Higher Education Debt Bailout; a rejection of the fee increment; the scrapping of the upfront 75% payment of fees for African international students and the conferring of degrees on all students who have met the requirements, regardless of debt.

According to Noorbhai, students are yet to receive a response from the university on their demands.

Shirona Patel, head of communications at Wits, said the Dean of Students, Jerome September, had responded to students. Patel said he had told the students that the university was in talks with the SRC and the vice-chancellor had appointed a team to look into their complaints

“95% of Wits students have registered. Classes started [on Monday] with over 25,000 students logging-in online. We have made a whole list of concessions to help students who experience hardship to register for the academic year,” said Patel.

In a written response to a memo sent in January, the university said that only students who have less than R10,000 debt could register.

“Students with balances more than R10,000 and whose total household income is below R600,000 are able to apply for registration assistance by paying 50% of the outstanding debt and making an arrangement to pay the balance of the debt during the course of the academic year,” the university said.

After dispersing from Empire Road, WITS students joined protesting CJC students in Parktown. The CJC students were also calling for all students to be allowed to register.

“It’s not fair that university students are getting accommodation and we’re not getting accommodation. We hope to see other TVET [Technical and Vocational Education and Training] colleges standing up with us and we can’t do this alone, we need forces from other universities,” said Mbali Radebe, a student at CJC and the former secretary of the SRC.

Next:  Cape Town’s sewers offer clues to next Covid-19 wave