Two years after the Tafelberg sale was overturned, progress has stalled. Now the provincial government says it may want to use the land “in the public interest”. 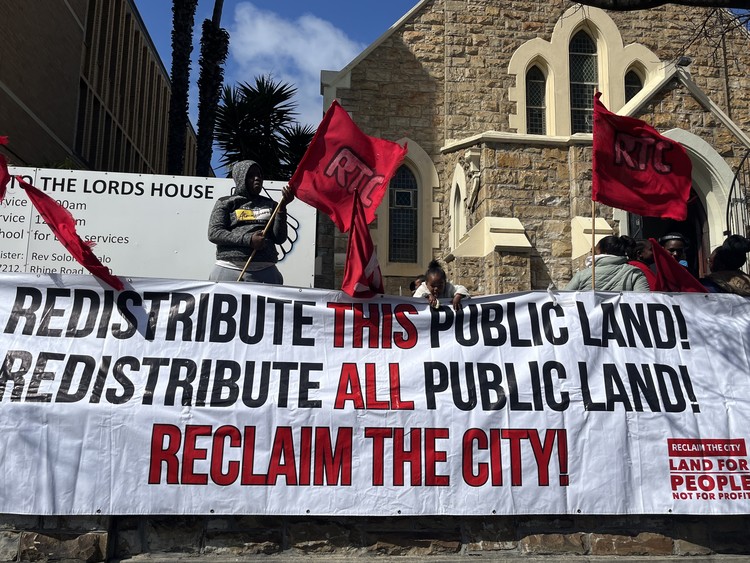 Housing activist group Reclaim the City has called on the Western Cape government to release the Tafelberg site in Sea Point for social housing, two years after the High Court ruled against the sale of the land. Photo: Mia Arderne

“We also want to play with our kids on the promenade,” said Elizabeth Gqoboka, a member of housing activist group Reclaim the City, and a former domestic worker and resident of Sea Point for more than two decades. She wants social housing to be built on the Tafelberg site in Sea Point.

Two years ago, the Western Cape High Court set aside the provincial government’s sale of the Tafelberg property in Sea Point, formerly the Tafelberg Remedial School, to a private school.

The ruling was hailed as a triumph for social housing in the city, and the culmination of years of activism. But since then, the 1.2 hectare site, owned by the Western Cape Government, has remained unoccupied and undeveloped.

On Saturday, Reclaim the City hosted a meeting at the Sea Point Methodist Church to discuss the state of the Tafelberg site. The church was packed with residents, workers and activists.

Audience members posed questions about how social housing on the site would work, including who would build the houses, where the money will come from, and who would qualify to live in Tafelberg, once developed.

Disha Govender, head of Ndifuna Ukwazi’s Law Centre, described the multiple ways to fund affordable housing, including government subsidies, cost subsidisation and private parties coming to the table. She said, “the Tafelberg case is not only about Tafelberg”, but more broadly how all land in central Cape Town is used when it comes to redressing spatial apartheid, and “how key legislation is interpreted and implemented by the state”.

Other supporters of the housing activist group expressed frustration at the slow movement from the provincial government following the 2020 judgment. Former director of Ndifuna Ukwazi Mandisa Shandu said that it was a political fight. “The government would rather spend millions in court than release Tafelberg and other parcels of land,” she said.

In 2015, the Western Cape government tried to sell the Tafelberg property to the private Phyllis Jowell Jewish Day School for R135-million. The sale was challenged by local housing activists through protest and in the courts, and on 31 August 2020 the sale was set aside. The judgment was hailed as a landmark in the fight against spatial apartheid.

Read a summary of four years of coverage of the Tafelberg matter here, and a guide to the judgment here.

Jonty Cogger, an attorney at Ndifuna Ukwazi, said that the provincial government has said that their appeal of the judgment in the Supreme Court of Appeal (SCA) must be completed before any development on the site could begin. “There is no legal barrier to developing social housing on the Tafelberg property,” said Cogger, “The only barrier is a self-imposed denial.”

Western Cape infrastructure minister Tertuis Simmers told GroundUp that the property “is no longer surplus to the needs of the Western Cape Government.”

Cogger said that Winde has previously committed to build social housing on the site. According to a 2016 feasibility study, 270 homes for poorer households could be built on the site. Winde was invited to the event on Saturday, but his office replied that he could not attend “due to prior long standing commitments”.

The Province and City of Cape Town are appealing parts of the judgment, including the finding that they have failed to redress spatial apartheid. Leave to appeal the decision to set aside the sale of the site was denied, as was leave to appeal the part of the ruling that determined that Sea Point fell within a Restructuring Zone. This means that any social housing developments in the area now qualify for government social housing grants.

A date for the hearing at the SCA has not been set - it is expected to proceed in 2023, according to Cogger.