Tim Noakes has a long history of making misleading and false claims, including promoting the debunked theory that the measles, mumps and rubella vaccine contributes to autism and promoting hydroxychloroquine as a treatment for Covid-19.

In a recent tweet, he linked to an utterly misleading BizNews article on the recent release of thousands of emails to and from Anthony Fauci, director of the National Institute of Allergy and Infectious Diseases. He added the comment “Here’s an email with the instructions describing: Coronavirus bioweapon production method.”

This article by BizNews editor Alec Hogg reposts material from the blog of Jeremy Nell (aka Jerm), who has been touting Covid-19 conspiracy theories. Each of the claims in this article is unsupported by the Fauci emails cited as evidence. Let’s start by focusing on the “bioweapon recipe” claim that Noakes called out in his tweet.

On 11 March 2020, a certain Adam Gaertner sent Fauci an email with the subject line “Coronavirus bioweapon production method”, in which he pasted verbatim an extract from a scientific paper published in 2005 in a major scientific journal. The lead author of the article, Graham Simmons, happens to be a colleague of mine at Vitalant Research Institute in San Francisco. The article describes experiments to dissect the mechanisms by which SARS-CoV (the virus that caused the original SARS outbreak in 2002) enters target cells (i.e., how the virus infects cells in the body).

In order to do so, the researchers developed “pseudotypes” that express the SARS-CoV Spike protein. Pseudotypes are convenient and easily cultured vector viruses (often HIV or Vesicular Stomatitis virus strains) that can be modified to express a desired surface protein, in this case the protein that allows SARS-CoV to enter and infect human cells. These pseudotype “viral particles” can be used to model how viruses enter and infect cells as well as agents that can block or reduce entry, and prevent infection of cells.

These pseudotypes are critical research tools and, while the experiments are conducted under stringent biosafety conditions, have no potential to cause disease in humans. The viral particles used in this experiment were replication-defective, meaning that they could not produce infectious virus and, critically, do not contain any genetic material from the coronavirus. Simmons’s recent research uses similar pseudotypes expressing SARS-CoV-2 Spike to develop neutralisation assays that allow us to measure the potency of antibodies developed after infection or vaccination.

Gaertner simply does not understand the science described in the article that he sent an extract from. Moreover, it describes experiments on the entry and inhibition of the SARS-CoV Spike protein — that is, of the virus which caused the original SARS outbreak. The two viruses are far too different from one another for these experiments to have contributed in any way to the development of SARS-CoV-2. Virologists are in agreement that the differences between the two proteins arose through random mutations and natural selection in animal hosts, almost certainly bats. The two viruses clearly share a common ancestor, but years of evolution in infected animals explain the differences, not genetic engineering. 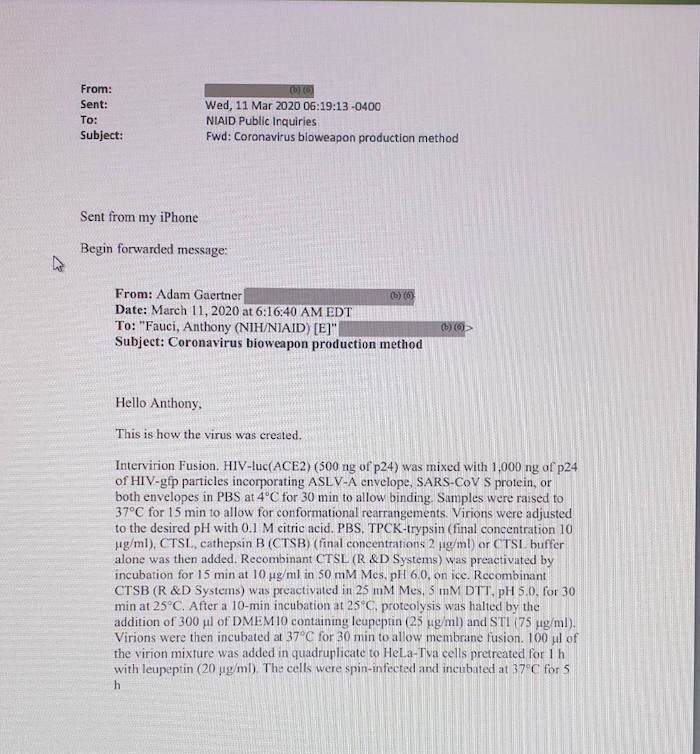 Adam Gaertner’s email misunderstands the scientific paper, published in 2005, from which he has copied. It is not a “coronavirus bioweapon production method”. Yet BizNews and Jeremy Nell misleadingly state: “Here we see a discussion, from 11 March 2020, in which they explain how the virus was created in Wuhan lab.”

Nell’s other claims are equally specious. He claims that in an email from February 2020 Fauci says that people with asymptomatic SARS-CoV-2 infection can’t spread the virus. But the text of the email makes it clear that Fauci stated that most (not all) transmissions occur from people who are symptomatic. Note further that in February 2020 statements of this kind were naturally somewhat speculative since not much evidence on asymptomatic vs. symptomatic transmission was available.

Nell cites an email from April 2020 as evidence that “they” knew children didn’t need masks. The email (to Fauci) contains a quote in which he makes the uncontroversial remark that “very few children have become sick with Covid-19 compared to adults”. The email is in fact about a planned study to assess the percentage of children who become infected with SARS-CoV-2 and the percentage who develop Covid-19 disease, precisely to develop a better understanding of the question. It does not in any way imply that children do not become infected and cannot transmit the virus, and so has no bearing on whether children should wear masks.

The most ridiculous innuendo in the article is that there is some kind of improper relationship or collusion between Glenda Gray, CEO of the South African Medical Research Council, and Fauci. A short email, in which she congratulates him on an interview published in the popular press and says she is proud to be associated with him, is quoted, but without any explicit claim as to why this should be of concern. It presumably is the basis for the “South African connection” in the title of the article.

Finally, Nell claims that an email from March 2020 proves that Donald Trump was right to promote hydroxychloroquine without any clinical trial evidence showing it to be an effective treatment. That evidence, when it became available, incidentally showed it not to be effective. The email extract quoted seems to be from a document (presumably attached to an email to Fauci) written by a certain Robert Wiskocil, and merely cites the well-known and published data showing that remdesevir and chloroquine were found to inhibit SARS-CoV-2 replication in monkey cells in a laboratory. This was the basis for considering it as a potential treatment, which unfortunately turned out not to have clinical benefit.

The BizNews article is a shoddy and unsophisticated piece of conspiracy theory peddling, which does not, even by cherry picking from thousands of emails, produce any evidence of impropriety or dishonesty. That this would be promoted by a prominent South African scientist with a large popular following would be disappointing if it were not what we have come to expect of Tim Noakes.

Eduard Grebe is a Senior Scientist at Vitalant Research Institute in San Francisco in the United States and a Research Associate of SACEMA at Stellenbosch University. He writes in his personal capacity.

Next:  “We don’t know what a vaccine is because no one has ever explained it to us” says homeless man