Tebogo Sithathu’s organisation got grants totalling R9.7 million, but National Lotteries Commission won’t say what it was for 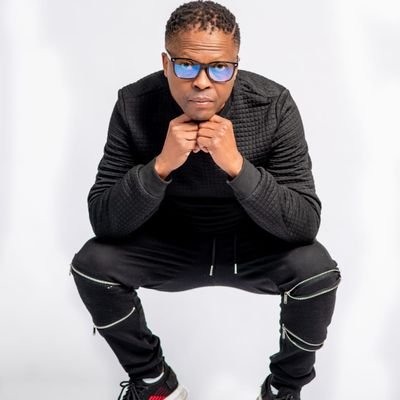 The controversial executive chairman of a non-profit that has received millions of rands in Lottery funding tried to intimidate a journalist to stop him from investigating a dodgy R10 million grant involving an ANC councillor.

Limpopo Mirror and GroundUp reported this month that directors of the Tshimbupfe Drop-in Centre for destitute children in the rural village of Tshimbupfe in Limpopo were unaware of a R10 million Lottery grant to the centre.

The chairperson of the Tshimbupfe Drop-in Centre, ANC ward councillor Tshifulufheli Solly Mudau, initially told Limpopo Mirror correspondent Kaizer Nengovhela by phone that the money had been used for a project to install boreholes and infrastructure at Hanani village, about ten kilometres from Tshimbupfe.

He said the drop-in centre had merely been used as an agent by the NLC for the borehole project, before suddenly ending the call. Further attempts to contact him were unsuccessful and he also failed to respond to questions sent to him via WhatsApp.

Residents of Hanani, including the chief in that area, said they were not aware of any Lottery-funded borehole project in the village.

GroundUp has confirmed with several sources that after the story appeared, the Special Investigative Unit (SIU) began an investigation into the grant.

Soon after the call to Mudau, musician and activist Tebogo Sithathu - whose Gospel Music Association of South Africa has received almost R10 million in Lottery grants and who has close links to the National Lotteries Commission (NLC) - contacted Nengovhela. He then sent a WhatsApp voice message, asking him to “stop harassing this organisation”.

Listen to the voice message left by Tebogo Sithathu for Kaizer Nengovhela.

In the message, Sithathu said: “I spoke to the councillor (Mudau) and he has made it clear … to give them some space. But we don’t want our NPOs and civil society organisations being harassed by the media.”

And then, in an implied threat he continued: “We have dealt with other media houses harshly … the GroundUps of this world, they know us well.” Sithathu was referring to an urgent High Court interdict to stop GroundUp publishing details of Lottery grants to NPOs. But the matter was withdrawn by United Civil Society in Action (UCSA), of which Sithathu is a director. It also agreed to pay GroundUp’s costs but is yet to do so.

Sithathu continued: “So please, you are a brother, we don’t want to be on opposite sides with you. Do your job, but do it ethically and professionally … let’s not step on one another’s toes because what you are doing … calling these organisations and forcing them to give information from their projects is not called for. They report to the NLC as a funder, they do not report to the media. Let us be very clear with that.”

Anton van Zyl, Nengovhela’s editor, said the message was a “clear threat”. Van Zyl said that the message was “sinister” and a warning that the Limpopo Mirror, a small-town community publication, could become a target if they did not drop their investigation.

“This is how they tried to take down GroundUp, using costly court cases and other nefarious means. We will not back down in the face of threats. This has made us more determined than ever to get to the bottom of what happened to the money granted to the drop-in centre.”

Sithathu failed to respond to detailed questions sent via WhatsApp and email about his engagement with Nengovhela.

NLC spokesman Ndivhuho Mafela said: “The NLC supports the independence and work of the media and strongly condemns any acts of intimidation of journalists by anyone.”

A man of many causes

The Gospel Music Association of South Africa (GMASA), an NPO that Sithathu founded in 2010 and still heads, has received over R9.7 million in Lottery funding since 2015.

But beyond his relationship as a beneficiary of Lottery funding, he also enjoys a close relationship with the NLC. Before Covid-19, he was a regular visitor at the NLC’s Pretoria headquarters.

In May last year he accompanied an NLC delegation that appeared before the Trade and Industry Parliamentary Portfolio Committee. During a break he threatened this reporter inside Parliament, accusing me and GroundUp of being part of a campaign against the NLC.

Afterwards, he told TimesLive: that “Joseph and GroundUp were part of a funded but inexplicable campaign against the commission.”

“There is an interest from certain quarters. People are fighting for the soul of the NLC. For what? One [reason] is that he [Joseph] is unhappy and that his funding was stopped,” he said.

The Lottery previously gave grants totalling R3.3 million to The Big Issue, between 2001 and 2015. This reporter was a voluntary, unpaid member of its board from 1996 to 2016. The Big Issue is a non-profit job creation project that publishes a magazine that unemployed and other marginalised people sell to earn a living. Sithathu’s claim repeated a lie started and perpetuated by the NLC, and repeated recently by NLC COO Philemon Letwaba in a TV interview.

“[Lottery operator] Ithuba is maybe in this thing - and I think there are links between him and Ithuba. We’ll find out,” Sithathu told Times Live.

Earlier this year, Sithathu was kicked out of a virtual parliamentary committee meeting discussing the NLC, when he used the chat function in Zoom to launch a vicious attack on Dean Macpherson, the Democratic Alliance’s shadow minister for Trade and Industry.

In September 2019, he was a guest - along with NLC COO Philemon Letwaba - on an SAFM programme in which he sang the praises of the Commission and spoke about GMASA and its funding.

And in June last year, he launched a defamatory attack on TV against GroundUp for publishing details of corrupt lottery grants and the organisations that received them. He accused GroundUp of “lying” and “acting like criminals”.

He has also been vocal and very aggressive in his support of the NLC. Using his @disruptor_t Twitter handle to attack GroundUp, this reporter, DTI minister Ebrahim Patel, opposition politicians, and anyone else he believes is “against” the NLC, like this and this. 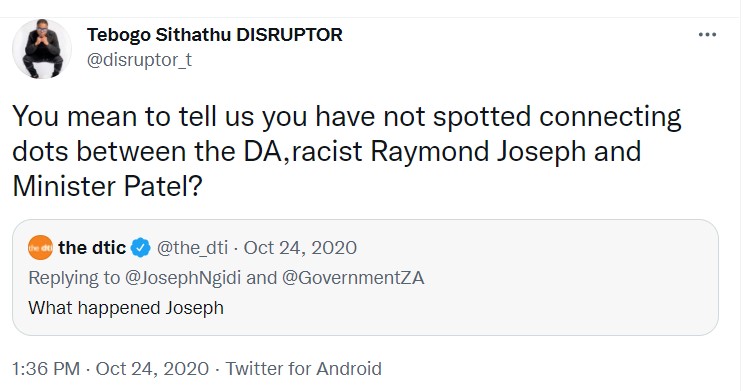 Some of the racist messages posted on Twitter by Tebogo Sithathu

Sithathu is also a director of the Independent Beneficiaries Forum, one of the organisations that took part in a march to the Department of Trade and Industry, calling for action to be taken to protect information being revealed about non-profits and beneficiaries that receive NLC funding.

An investigation by amaBhungane into the “ragtag, astroturf army [that] sprang up to make common cause with the NLC and its bid to keep beneficiaries secret” had this to say about Sithathu:

“UCSA’s spokesperson and treasurer, Tebogo Sithathu, appears to be a professional sock-puppet. He is the founder of the Gospel Music Association, which has received funding from the lottery but appears to be inactive.

Sithathu has cycled through a variety of music industry organisations and was allegedly asked to resign by the Musicians Association of South Africa, according to a senior industry source who asked not to be named.

He has been active in support of the Google-backed Copyright Amendment Bill, taking a public position contrary to that of the SA Music Industry Council, where he also resigned recently.

Completing the circle, Sithathu is also a director of the Independent Beneficiaries Forum.”

More recently, Sithathu was prominent in a march on the US Embassy over SA’s copyright law. He was also a staunch defender of Hlaudi Motsoeneng and also took a lead in protests against SABC retrenchment plans.

Department of Social Development records show that GMASA has been non-compliant and dormant since 2015. But, despite failing to submit annual, statutorily required documentation for the past six years, the NLC has given it millions over the past few years.

Since the Lotteries Act stipulates that funding applications require two years of audited financial statements, it is not clear what financial information it submitted when applying for Lottery funding.

GMASA’s Lottery funding is made up of R1.28 million and R1.92 million in the 2014/15 financial year, R3 million in 2015/16, R2 million in 2016/17 and R1.56 million in 2019/20. Neither the NLC nor Sithathu responded to a question about what projects these grants funded. But, based on project numbers published in NLC annual reports, at least three different projects were funded.

It is also difficult to see how the Lottery millions were spent, since GMASA’s website and social media accounts, which are also dormant, lack any details.

Its Facebook page, which was created in 2014, was last updated in 2016. The header on the page advertises a 2016 “Gospel Extravaganza” at the Mangosuthu University of Technology. The header has several sponsor logos, including the NLC’s logo. This is the same year the NLC gave GMASA a R2 million grant.

Its Twitter page, @GMASOUTHAFRICA, is dormant. It last tweeted on 21 April 2016 and the only tweets on its timeline are about the Mangosuthu University event.

GMASA’s website is no better: none of the links on the home page work, but are still accessible via Wayback Machine, an archive of the internet. The Past Events page lists only events from 2012.

The About Us page gives some details of the history of GMASA.

“Registered as a non-profit organization and founded in 2010 by Tebogo Sithathu, a founding-member of the popular ‘TWINS group and now a Gospel-singer himself,” it states.

Under a “Our Business” heading on the About Us page, it says: “Gospel Music Association is a home and a custodian of all Gospel Artists in South Africa. We organize, lobby, advocate, promote and develop the Gospel music industry of South Africa in its entirety.”

NLC spokesman, Ndivhuho Mafela, responded to some questions from GroundUp. But he ignored others, including a request for details about GMASA projects funded by Lottery grants.

Responding to questions about Sithathu’s relationship with the NLC, Mafela wrote: “The National Lotteries Commission would like to put it on record that it played no part in the formation of UCSA and does not play any part in the said organisation activities, including any litigation.”

On Sithathu’s regular visits to the NLC’s offices, during which he has met with NLC Commissioner Thebang Mampane, according to several sources, Mafela said: “Please be mindful that the NLC interacts with a wide variety of stakeholders that visit its offices on a daily basis including beneficiaries. These stakeholders visit NLC offices for various reasons ranging from status enquiries of their applications to submitting progress reports of their projects.”

On Sithathu’s appearance on a radio show with NLC COO Philemon Letwaba, he said: “From time to time the NLC does publicity drives with its beneficiaries to showcase the impact that its funding is having on communities. In most of these drives beneficiaries are invited to share their experiences in implementing their projects.”

Next:  Woman dies after waiting seven hours for ambulance in East London