Thousands take to streets in protest against job losses

Members of COSATU unions in nationwide marches and strike

Members of COSATU unions all over the country were on a one-day strike on Wednesday. They took to the streets to protest against job losses.

In Johannesburg, thousands marched from Fitzgerald Square in Newtown to the Gauteng Provincial Legislature and the Chamber of Mines.

COSATU is calling for job creation, an end to corruption in the private sector, a ban on labour broker companies and an end to retrenchments for the sake of profit.

In its memorandum, COSATU also opposed the unbundling of Eskom announced by president Cyril Ramaphosa in his State of the Nation address. This would cause further job losses, COSATU said.

Gauteng COSATU Secretary General Dumisani Dakile said the unbundling of Eskom “will not happen while we are alive”.

“The economy has grown but that did not translate into jobs for our people,” he said.

Dakile expressed his disappointment that Premier David Makhura did not accept their memorandum. Instead, Eskom Chief Executive Officer Phakamile Hadebe came down to sign and accept the memorandum outside the Chamber of Mines.

In Port Elizabeth, hundreds of workers from COSATU affiliates marched against job losses.

The workers met at Njoli Square in Zwide and marched along the Njoli Road to Nangoza Jebe Hall.The march started with about 150 people but swelled to hundreds along the way to the hall.

They said corruption was behind the current high unemployment rate in the country. 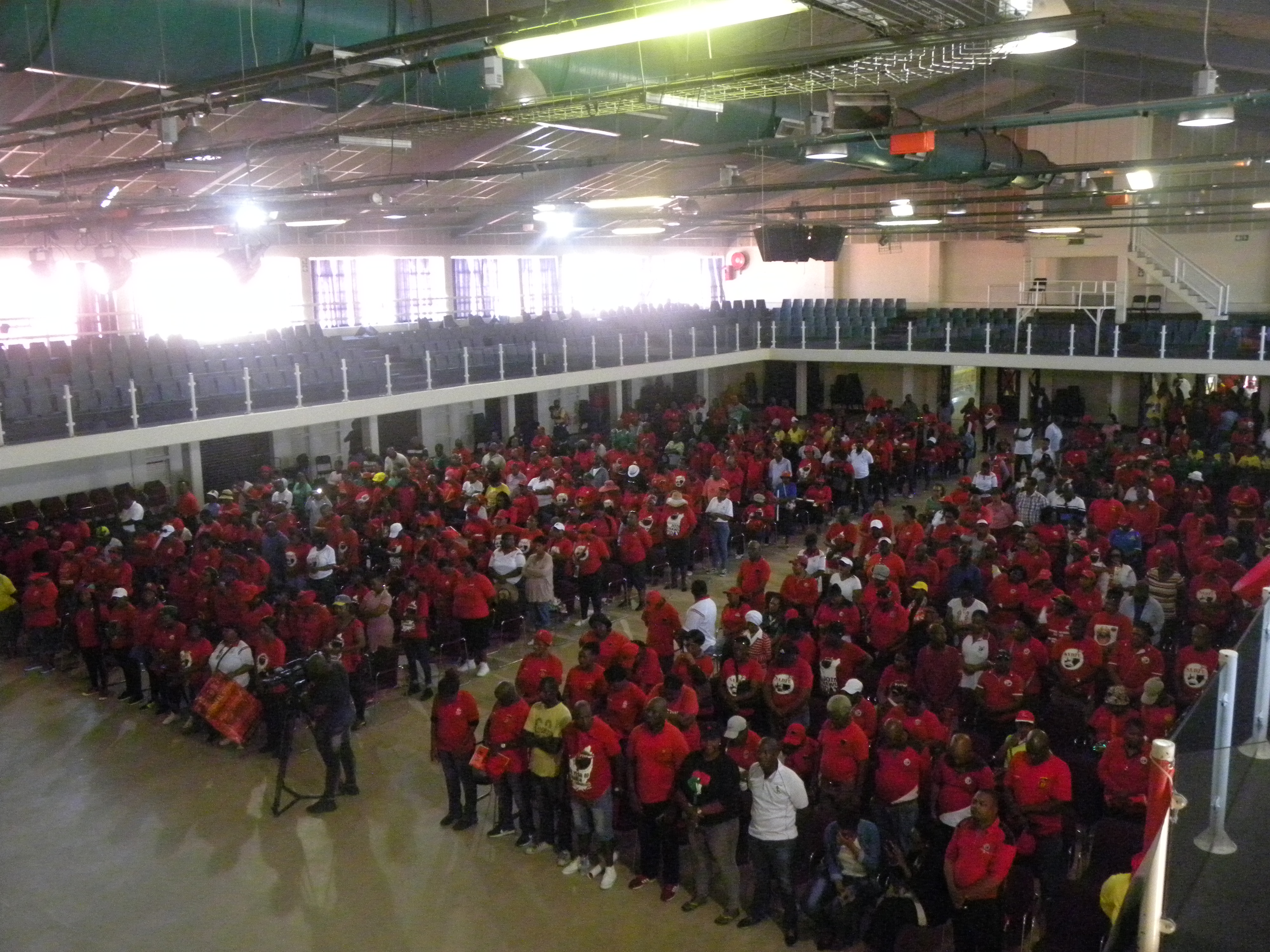 National Education, Health and Allied Workers’ Union (NEHAWU) national general secretary Zola Sapeta said COSATU affiliates would mobilise members to vote for ANC in the May election but the ruling party should remove ministers and officials implicated in corruption and those involved in state capture inquiries.

He said, “Why keep Nomvula Mokonyane and Bathabile Dhlamini in government? All politicians implicated in state capture investigations should be arrested.”

Sapeta said workers did not want the unbundling of Eskom “as it will create unemployment”.

He said South Africa was not experiencing loadshedding but a blackout.

“Capitalism is destroying our society. China is the largest economy because they are not capitalists,” he said.

Members of SADTU, the Southern African Clothing and Textile Workers’ Union (SACTWU), the ANC, SACP, and SANCO took part in the march.

A memorandum of demands was handed over to Mzimkhulu Papu, assistant director in the Department of Labour.

Members of COSATU affiliates also filled the streets of King William’s Town, gathering at the stadium in Buffalo Road and marching to the Department of Labour in Alexander Road to hand over a memorandum to Premier Premier Phumulo Masualle.

The crowd broke out in song demanding that COSATU central executive committee member Ntomboxolo Maheneza be relieved from handing over the memorandum when she said she was from the same hometown as Masualle.

Instead, COSATU provincial secretary Thabiso Kunene handed over the memorandum, telling the crowd: “We are tired of these corrupt politicians that are feeding themselves, while at the end of the day the workers are retrenched.”

The premier promised to hand over the memorandum to president Cyril Ramaphosa today as he was on his way to see the president.

Responding to a poster which read “Kuyanuka eQonce” (King William’s Town is smelly), Masualle said: “This is a pressing issue, I will make sure the president gets it by this afternoon. This placard worries me and it means that someone is not doing their job. I will take it upon myself to make sure that the town is fixed.”

In Durban, the city centre came to a standstill as hundreds of union members walked from King Dinuzulu Park to the City Hall to hand in a memorandum at the office of KwaZulu-Natal Premier Willies Mchunu. 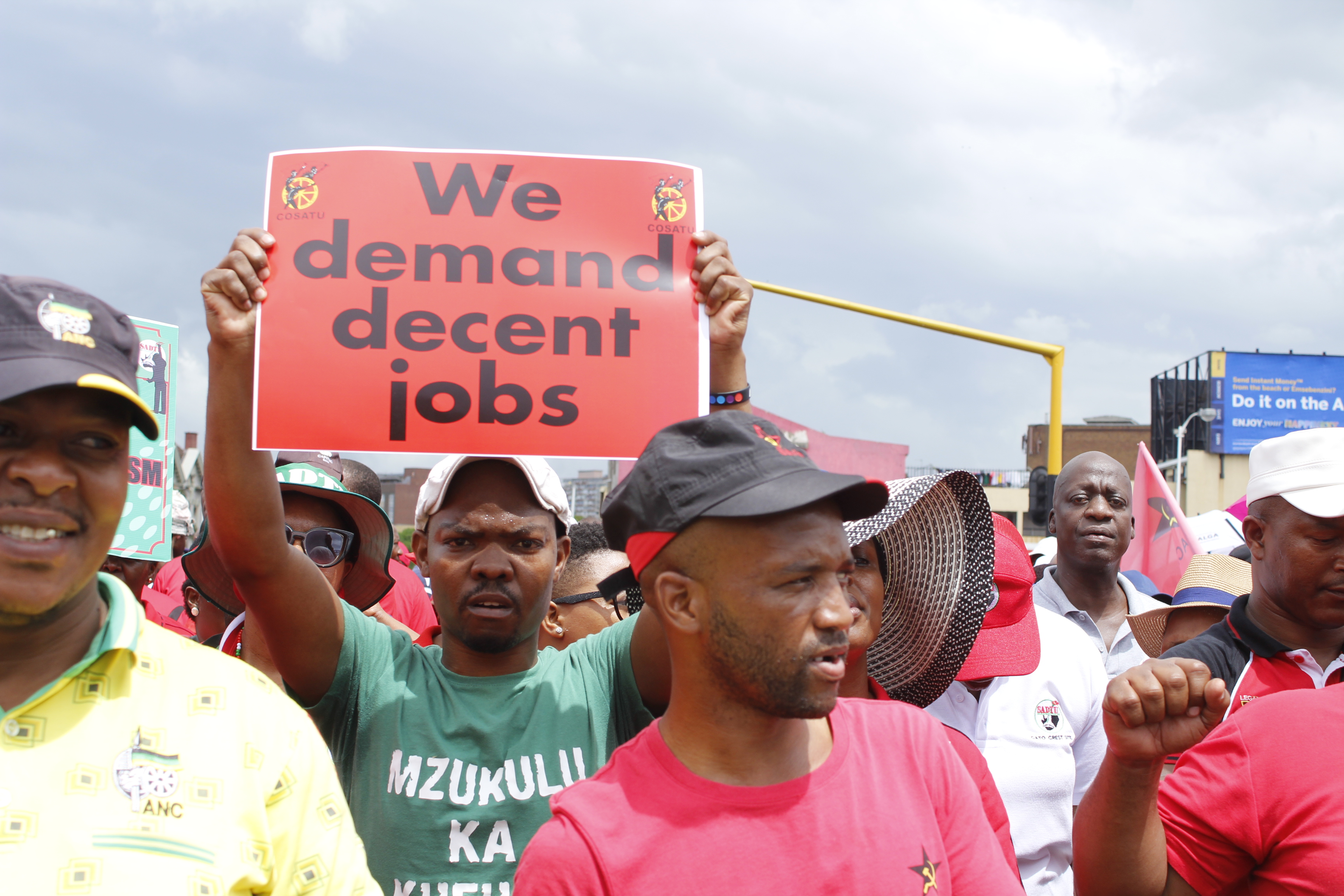 “The current unemployment rate does not even include those that have lost hope. Economic growth is impossible when more than six million people are sitting at home, struggling in poverty. If we are serious about eradicating poverty, we have to be serious about creating jobs and enhancing skills. Everyone should have a fair chance to have a job.”

Losi said skill creation, especially in small businesses, was a priority. “Companies are no longer hiring, and young people graduate only to stay at home and end up hopeless.”

“We are here on these streets nationally to voice our frustrations.”

Marcher Siyabonga Mpisane, 27, has been unemployed for a year. “Young people do not have jobs and the government needs to wake up. We’ve fought a long battle for access to higher education, yet no jobs are available for the graduates. What is expected of our future?” said Mpisane.

Umlazi school teacher Nosipho Shabane, 32, said the rate of unemployment was discouraging for teachers. “It’s very saddening to see a child with ambition and intelligence stuck on streets corners without a job. It makes what we do seem futile.”

“That is why I came here despite it being a teaching day.”

“The government must treat this as a crisis,” said Shabane.

The streets of Thohoyandou in Limpopo were filled with red T-shirts as members of 16 COSATU-affiliated unions took to the streets.

“The march is about fighting against job losses and fighting against crime and corruption. We are also against the unbundling of Eskom,” COSATU deputy president Mike Shingange, told GroundUp.

The march moved from Thohoyandou Stadium to the police station and then to the Vhembe District Municipality offices, where MEC for Economic Development, Environment and Tourism in Limpopo, Seaparo Sekwati received the memorandum on behalf of Premier Chupu Mathabatha.

Local public schools were empty as the teachers had joined the march. 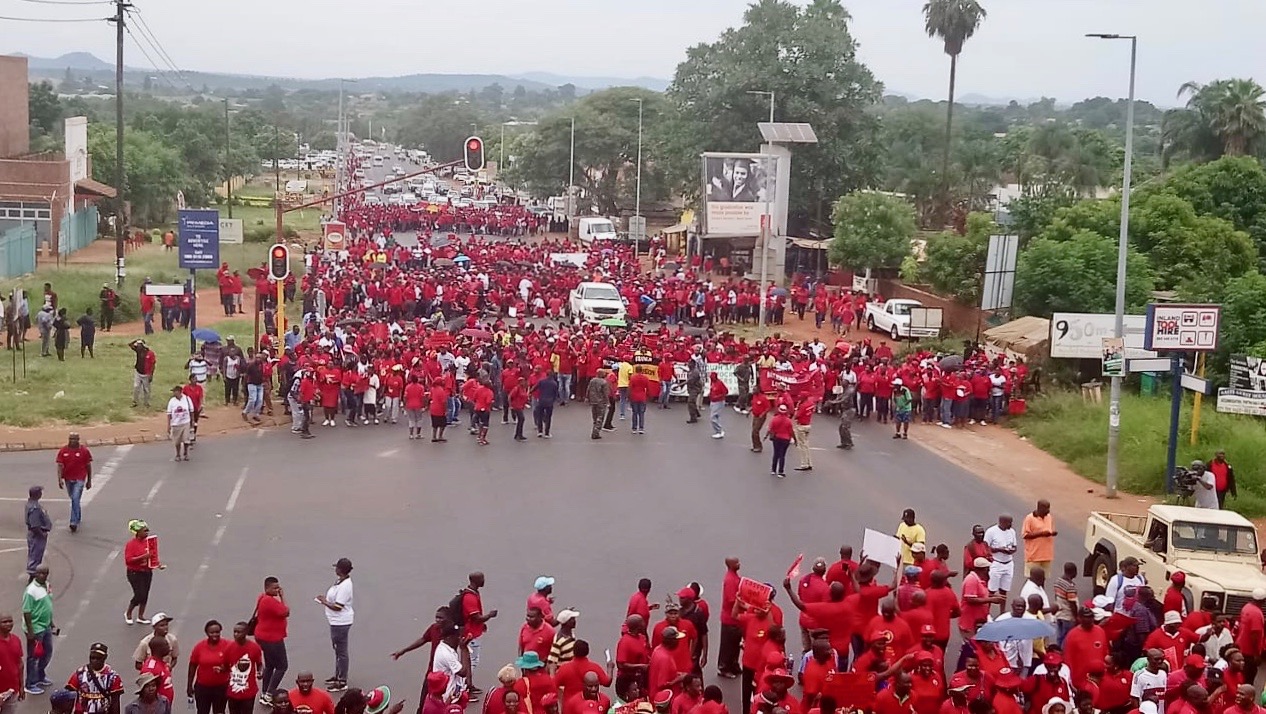 The streets of Thohoyandou were filled with red t-shirts as members of COSATU unions marched. Photo: Emelda Tintswalo