Thousands of farm workers face eviction with the end of the National State of Disaster, activists warn

Women on Farms march against evictions in the Western Cape 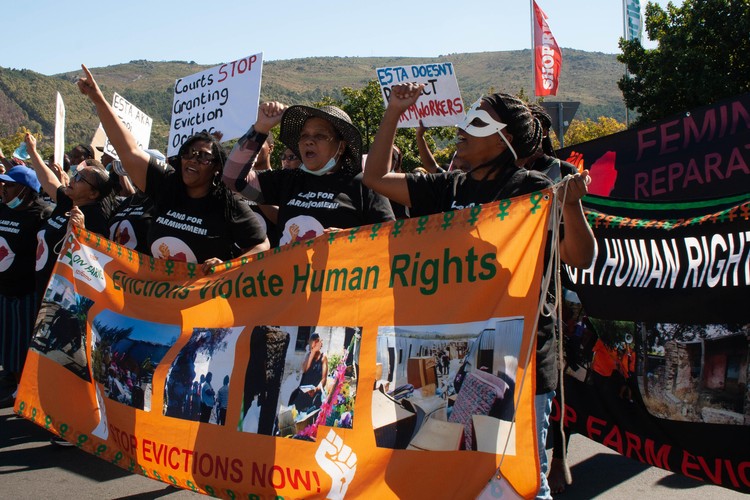 About 100 women marched in Paarl on Tuesday to draw attention to a looming increase in evictions from farms. Photo: Liezl Human

Over 100 farm women marched to the Paarl Magistrates Court and Drakenstein Municipality on Tuesday to draw attention to a looming surge in evictions from farms in the Western Cape.

In its memorandum, Women on Farms Project (WFP), the organiser of the march, said farm evictions were likely to increase now that the State of Disaster has been lifted.

“When eviction cases already on the court rolls are effected, thousands of farm workers and their families face homelessness or living in overcrowded informal settlements,” the memo read. WFP called for:

The memo was addressed to the Chief Magistrate at Paarl Magistrates Court, Drakenstein Municipality Mayor Conrad Poole, Minister of Justice and Correctional Services Ronald Lamola, Minister of Police Bheki Cele, and the Human Rights Commission. Neither the senior magistrate nor the mayor came out to receive the memo.

During the march, farm women were chanting “down with evictions” and carrying placards that read “Courts STOP granting eviction orders” and “ESTA doesn’t protect farm workers”.

But according to Carmen Louw of WFP, farm dwellers are not adequately protected.“On the one hand they implement ESTA to effect evictions, but they’re not using ESTA to protect the rights of farm workers.”

Farmers who evict farm dwellers illegally are rarely prosecuted or held accountable, she said. WFP had seen evictions of farm dwellers without court orders, as well as “constructive evictions” where the farmer switches off the electricity or water to force farm dwellers to move out.

Joanne Johannes, a farm worker from Simondium, said: “We are the people who, during Covid, went out to work on the farmlands in order to feed South Africa and to keep the economy going.”

Ida Plaatjies, who lives on a farm in Simondium where she used to work, said at 62 years old she doesn’t even have a small piece of land to grow vegetables that her family could live off. “We have nothing,” she said.

Jacqui Samson, Executive Director of Planning, Development and Human Settlements at Drakenstein Municipality, said in response to GroundUp questions that the municipality does not support evictions and “has played its part in all eviction matters where the courts ordered it to provide alternative accommodation”.

“In line with the Municipality’s Temporary Housing Assistance Policy, where ordered to provide alternative accommodation to evictees, Drakenstein Municipality provides them with a 24-square-metre structure in a municipal emergency housing site,” said Samson.

Previous:  You chose electricity and toilets instead of houses, families told

Today, I was exposed first hand to the aftermath of a farm eviction in Durbanville, with a court order in place. I stopped briefly to hear their side of the story. They were unaware of their Constitutional rights and other relevant laws like the Extension of Security of Tenure Act (ESTA).

They tell me their possessions were taken and dumped on that spot. It’s their reason for setting up camp on on public land close to the farm they were evicted from, to protect their belongings. It appears to the public that another illegal settlement is emerging, evoking feelings of fear. But who will mediate? Who will wield the legal tools on their behalf?

Activating the powers and purpose of the Constitution and ESTA require education and money for legal representation, to even the playing fields. These farm workers have neither. So what happens now, but most importantly, what happens to the children?