“They must give water to the community before the schools” 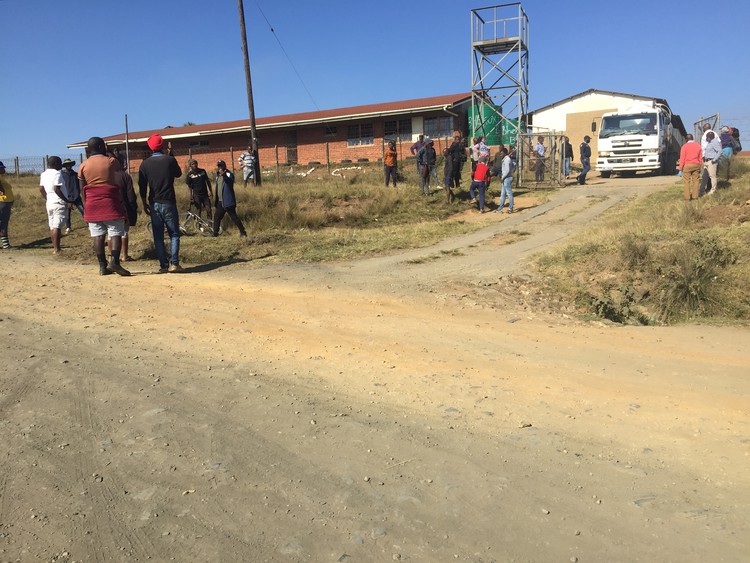 Residents trying to block the entrance to Bhekuximba Secondary on Monday where a tanker delivered water to the school. They have shut down the schools in the area until their demand for water is met. Photo: Nompendulo Ngubane

Grade 7 learners at Bhekamatshe Primary in Tafuleni location in Pietermaritzburg were removed from the school’s premises by community members on Tuesday morning.

On Monday angry residents also blockaded the entrance to Bhekuximba Secondary for hours, preventing the delivery of water from a tanker. Learners were sent home. They were told to return next Monday, said resident Lucas Dladla.

“Both the secondary and primary school learners will return to school when the community has water,” said Dladla.

“No water, no school. Our taps have run dry for over two years. We are surprised to see a water tanker coming to the school,” he said.

“The community is drinking dirty water from rivers. No one has taken our matter seriously. Now that there is a demand for schools, they are able to send a water tanker. It can’t be. They must give water to the community before the schools. No school classes will resume until we get water from our dry taps,” said Dladla.

A resident who asked not to be named said, “We care for our children but this is the language that is being understood by our leaders. Go and see our streams. You’ll be ashamed. The same water is used by animals. All we asked for was a temporary solution from the ward councillor. We were ignored. No schooling will continue until they make a plan about water.”

Ward councillor Nathi Mbanjwa condemned the community’s actions at the schools. He said he is aware of the water issue in the ward.

“I went to the community and told them that we are planning on implementing the project of springs in the whole of ward 5. We are discussing the plans with the office of the premier on how the springs can be helpful to the community,” said Mbanjwa.

The Department of Education had not responded to questions sent on Monday by the time of publication.

Next:  Residents of Kliptown, where the Freedom Charter was signed, still don’t have decent toilets

Previous:  “We are not doing any business” says street vendor