“We are not doing any business” says street vendor 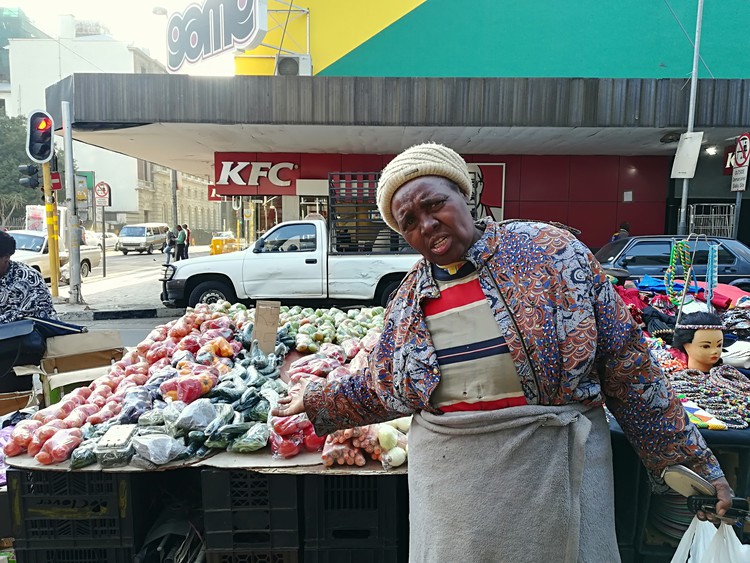 “We are not doing any business. No one has money to buy so we just sit here the whole day,” says Lulama Mali, whose stall is on President Street in Central Johannesburg.

Mali was speaking as a representative of the Johannesburg Informal Trader Platform (JITP) during a Zoom dialogue hosted by C19 Coalition - a consortium of about 316 civil society organisations. During the dialogue session on Monday, informal traders spoke about their challenges and some of the opportunities of operating during the current level 3 lockdown.

According to a research report by C19 Coalition on 25 May, around 70% of households in poor neighbourhoods source food from the informal sector.

This is because informal traders sell food close to where people live and work, which saves on transport costs. They usually operate for longer hours, sell products in quantities that people can afford, often have lower prices, and in some cases let regular customers buy on interest-free credit, according to the report.

When the lockdown started on 26 March, street vendors who mostly rely on daily sales to make ends meet were prohibited from working. This meant an immediate loss of income and many fresh produce sellers had to throw away expired items.

On 6 April, the Minister of Small Business Development Khumbudzo Ntshavheni issued directives that allowed street vendors to work, except those who sold cooked food.

In the report, C19 Coalition said traders were still suffering because of smaller and uncertain markets.

Informal traders were required to wear masks, provide hand sanitiser and enforce physical distancing at their stalls but were not provided with masks or sanitiser by their municipalities.

The directives issued by the government also required all spaza shop owners and informal food traders to obtain permits issued by their local municipalities. If they had operated without a permit before the lockdown, they could apply for a temporary Covid-19 permit.

The coalition said these directives were “exclusionary and xenophobic”. It said permits should not be linked to asylum papers because many asylum seekers had to travel long distances every four or five months to renew their documents.

The coalition said traders who do not have valid immigration documents should be allowed to trade, “given that they are unlikely to be able to acquire such documentation or to leave South Africa during the lockdown and have the right to work while in South Africa”.

A separate report by the coalition detailed the experiences of food vendors in Cape Town, Johannesburg and eThekwini during the lockdown and how the directives were being implemented differently across municipalities.

In Cape Town, vendors recalled being sent “from pillar to post” to get permits. Many vendors had to make costly trips to municipal offices far from their homes and trading sites. Permits were limited to vendors who were operating before the lockdown. No new permits were issued.

In eThekwini, unregistered vendors did not get permits. Vendors already registered were issued permits immediately, said the coalition.

Fara Baloyi, of the Tshwane Informal Traders Platform, said there was confusion about the issuing of permits in Tshwane. He said traders went to submit a list of those in need of permits on Monday but were told that the regulations had changed.

“First they were giving permits to fruit and veg [traders] and spaza shops. Now they are taking everyone whether they were selling or not selling [before the lockdown],” said Baloyi.

“Tshwane is making it difficult for us to get permits,” he said.

In Johannesburg, the Coalition reported that permits were initially given to vendors already registered with the municipality but later only issued to people with SA IDs or asylum seekers’ permits.

Brian Phaaloh from the South African Informal Traders Forum said their experience in eThekwini and Johannesburg had been “so far so good” because they had not waited for the municipalities to come up with a plan for traders.

“We came up with our own plan for our members to survive… and we did not give City officials a chance to negotiate,” he said.

He said people working in the informal sector were not being supported by the government and needed to develop their own plans. He said the Forum was educating members on operating requirements like masks and hand sanitisers to avoid possible harassment by the police.

“We are not fighting with government here. We are not here to prove anyone right. We are fighting a pandemic… it’s our priority to make sure everyone is aware of what has to be done,” said Phaaloh.

Next:  Pietermaritzburg schools shut down by protesters demanding water

Previous:  The CCMA in a time of Covid-19: delaying and denying justice?

How to buy an affordable home in the Western Cape