When a car stops, all the women compete to get there first 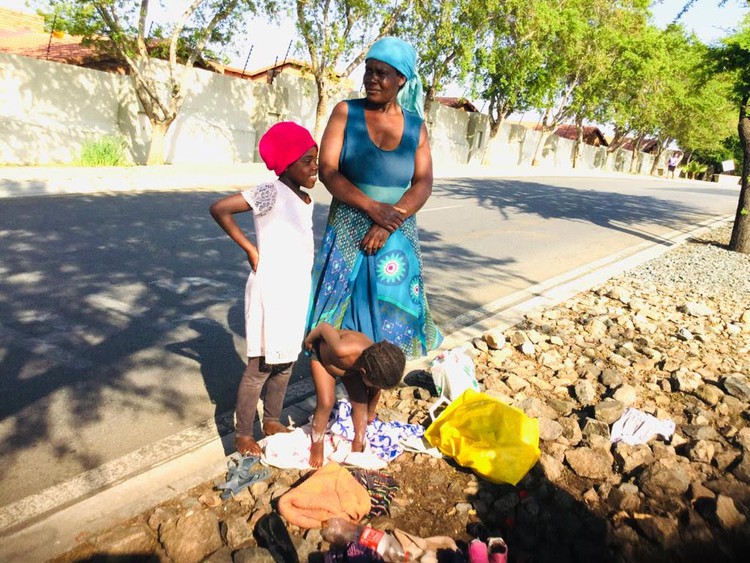 Clemesi Macheka with two of her daughters. They have been living off handouts on the street since she was fired at the beginning of lockdown. Photo: Kimberly Mutandiro

Sihle Tolo has been pacing busy Bellairs Drive in Northriding in Johannesburg with her one-year old baby on her back since morning. Two children are left at home waiting for whatever she will bring back for them to eat. Tolo is one of many domestic workers who lost their jobs during the Covid-19 lockdown.

In anticipation she looks at passing vehicles. No-one has stopped since morning.

“If only someone could stop and give me some food or money to buy a pack of kimbis [napkins] for my baby, l would be most grateful,” she says. Raindrops start falling and her baby begins to cry. But she cannot leave just yet.

Bellairs Drive, near a shopping mall, has become a popular spot for a dozen women like Tolo who lost their domestic worker jobs during lockdown. Stranded, they come with their children in the hope of attracting sympathy from passing drivers. Some do stop, handing over packets of food, second-hand clothes, some money or just a loaf of bread. It has become a competition among the women to race to vehicles which stop, hoping to be the first and get the food. Sometimes they compete with one or two men who have also started to stand on the street looking for help.

More than 250,000 domestic worker jobs were lost between the first and second quarters of this year, according to Statistics South Africa.

When the lockdown started, Tolo’s employer told her to stop coming and promised to call her back after lockdown. When she reminded them that she still needs the job, they told her to wait. They gave her no pay during lockdown. Her husband, who used to work as a gardener, also lost his job. It has been difficult to pay their monthly rent of R400 at Car Centre informal settlement near Randburg where they live.

She says she thought of taking the children home to KwaZulu-Natal, “but there is no money for that” .

“We are surviving off the food which we get here. That is, if we can get anything at all,”

Also out on the streets, her baby on her back, is Sharon Moyo, from Bulawayo, Zimbabwe. Her baby is seven weeks old. She was only able to rest at home for a few days after giving birth. After that she started leaving her shack at Car Centre, some 6km away, and bringing the baby out on the streets in the hope of getting food, money, or clothes. For months she has not been able to pay rent. She also lost her domestic worker job in nearby Randburg during lockdown. She received no pay from her employer when she left the job. The father of her child, also jobless due to the lockdown, left her before the baby was born.

“I am practically raising my child on the street because there is nothing else l can do,” says Moyo. “All l want is to give my child a future.”

When the baby starts crying, she sits down to breastfeed, keeping an eye on the street in case a car comes by to drop something.

Another immigrant from Zimbabwe, Nomalanga Tshuma, brings her six-year-old daughter onto the streets every day. She is now unable to pay R200 monthly school fees for her at a local school. Motorists sometimes hand the girl food.

“I don’t know if l will ever be able to pay school fees for my child. At least if we can get food to eat, it’s better than nothing,” she says.

About a kilometre away is a Spar supermarket. A larger group of women wait at the entrance with their children. A motorist stops to hand out a few food parcels. All the women and children run to the car. A man gets to the car first and takes two of the parcels, leaving only two packets for the women.

“That is the situation here: if you snooze you lose. But we cannot blame anyone as we are all desperate,“ says Clemesi Macheka from Mozambique who stands at the spot with two of daughters, an eight-year-old and a three-year-old. Of her six children one is mentally ill. They have been living off handouts on the street throughout the lockdown. She can no longer pay school fees for her older child.

“l lost my job and never got a cent. I don’t know what will become of my family. Going back to Mozambique is out of the question because we have no money,” she says. 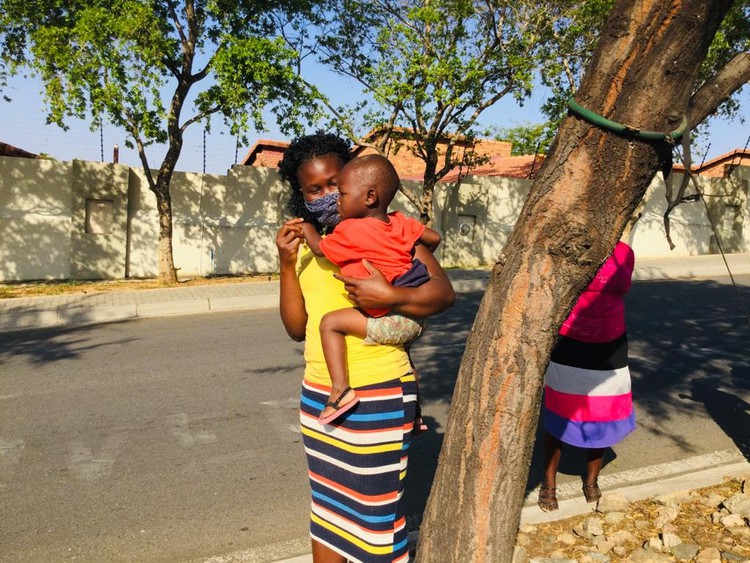 Claudia Nuvunga spends her day on the street with her two-year-old son, hoping for handouts of food or clothes. Photo: Kimberly Mutandiro

“People should come and help us with food or clothes or, better still, jobs,” says Claudia Nuvunga, also from Mozambique. In her arms is her two-year-old son. “It’s even harder for us because we are immigrants and do not get grant money.”

She also lost her domestic workday job during the lockdown and doesn’t know if she will ever get another. For now, she is happy if well wishers give her a loaf of bread to see her through the day.

Next:  Court order has big implications for land expropriation