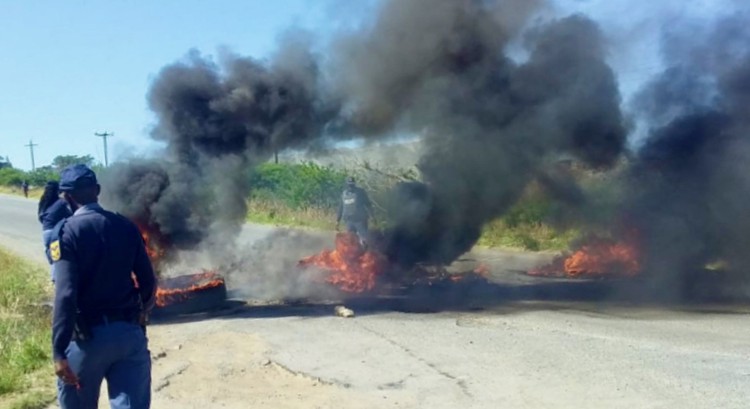 People protesting over a lack of water clashed with police in Butterworth on Wednesday. Residents had blocked roads in Msobomvu location demanding water. Photo supplied

Butterworth residents have been protesting since Wednesday, demanding water. There have been numerous protests over water in the past year. Residents say they have had no water delivered for the last two weeks. They are demanding that no one less than President Cyril Ramaphosa address them on the crisis.

After protesters clashed with police, 11 people were taken in for questioning and two police vans were left damaged.

In East London on Wednesday, Eastern Cape Department of Water and Sanitation head Portia Makhanya, Amatola District Municipality Manager Dr Thandekile Mnyimba and Amatola Water Board Acting CEO Boniswa Hene addressed the media on the drought that has gripped the area. (In December 2015, a drought disaster was declared by then Eastern Cape Premier Phumulo Musualle.)

Mnyimba said, “We are working very well with the community of Butterworth in fighting the water crisis.”

He said the protest had nothing to do with the water crisis but was “political thuggery” ahead of the local government elections.

Last year residents elected a committee called Mnquma Concerned Citizens to fight for clean water. It has been leading a number of water protests since August 2019.

“Officials live in East London under Buffalo City Metro Municipality where there’s water. When they take a bath they spend an hour because they have enough water,” she said.

“People here have been without water for weeks, some areas for months. When we started the protest last year, elections were far [away]. Our problem is that they keep on promising us water but they are failing to deliver. We are tired of their empty promises. It’s time we see action,” she said.

In November 2019, Minister of Human Settlements, Water and Sanitation Lindiwe Sisulu visited Butterworth and promised the hire of 50 water tankers to fill 120 tanks.

However, in February 2020, residents were back on the streets closing the busy N2 between Butterworth and East London with burning tyres after their water tanks had stood dry for three weeks. Shops had to close due to the lack of water. Protests went on for a week.

Then Eastern Cape Premier Oscar Mabuyane visited the town, promising residents a wall around Gcuwa dam and piped water from the Tsomo River as part of the R735-million Ngqamakwe project.

The municipality said it had sunk 33 boreholes; 17 were being tested; eight were operating but four of them had water not fit for human consumption. Residents said the boreholes only worked for a week and went dry.

In February, we reported that residents were drinking water from boreholes marked not fit for human consumption.

In September we reported that three out of four water trucks were in for repairs. There were two days of water protests, but they ended so as not to disrupt school exams.

Resident Asisipho Mhlathi said the water crisis in Butterworth dates back to 2014. “That dam [Gcuwa] is full of sand. Even if it can rain now, the water will not last. Since last year August, we have been hearing nothing but empty promises. People are drinking drain water because we have no water,” said Mhlathi.

“By the time most people come back from work the rain tanks are already empty. Water here only lasts for a few hours because when we get it we already know that the water truck will come back after three weeks,” she said.

Mhlathi said to wash herself she uses a one-litre jug.

“That water is not even enough to flush a toilet,” she said.

Residents in Cuba, Msobomvu, Bhungeni and Yako said their taps have been dry all year.

Eastern Cape Department of Water and Sanitation head Portia Makhanya said that since Sisulu visited in January, the department had allocated R230 million over three years to Amatola for water. A site office was being established for the Tsomo-Ngqamakhwe Phase 5 water pipeline project Mabuyane had spoken about. The Department has set aside R50 million this financial year to start the project.

“It is expected to take a period of 18 months to completion,” she said.

Next:  These domestic workers lost their jobs during lockdown. Now they have to beg on the streets with their babies