“Mice, cockroaches, mosquitos and flies were attracted to the dumping site”

eThekwini Municipality warns of fines of up to R5,000 for illegal dumping 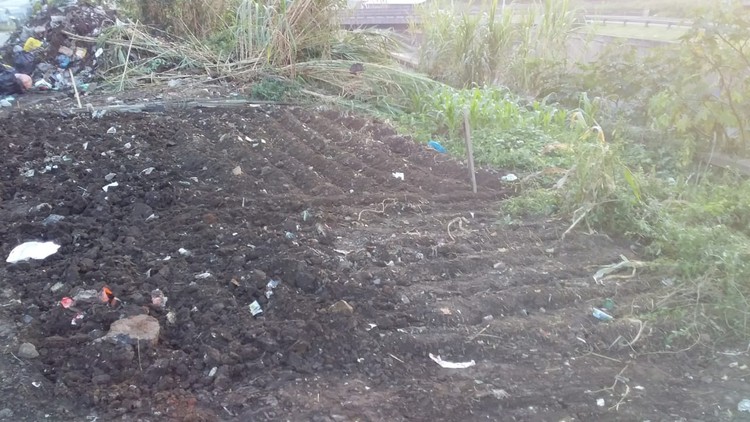 KwaMathambo informal settlement in Durban is reviving a food garden that became a dumping spot in the community. Photo: Nokulunga Majola

Residents of KwaMathambo informal settlement in Durban have turned an illegal dump site into a vegetable garden for the community.

“Mice, cockroaches, mosquitos and flies were attracted to the dumping site,” said committee member Ndodeni Dengo. He said the eThekwini Municipality collects refuse every Thursday but leaves behind things like rubble on the ground and discarded furniture.

In 2018, we reported on the rat-infested illegal dump site. A few days later the dump site was cleaned by the City and a community garden was started, where they grew cabbage, spinach and maize and provided fresh vegetables for the community. But after the harvest, only a few people continued growing vegetables while others started using the vacant land to dump discarded rubbish and other items, community members told GroundUp.

Each person was given a portion that they are responsible for maintaining by watering it twice a day. One of the residents has a food stall and says he plans on using the produce from the garden in his stall as well.

“This project will help the community with fresh vegetables and possibly create employment for people who will be selling our fresh produce,” said Dengo.

City spokesperson Mandla Nsele said that despite efforts by the municipality to clean and collect refuse often, illegal dumping was still a challenge. “Trash not only clogs up our stormwater drains but also washes up into our rivers and oceans, which is a danger to all marine life.”

Previous:  This charity has been feeding Cape Town’s hungry for more than 80 years. Never have so many people queued for food