Former president repeated misconceptions about the disease when he addressed UNISA 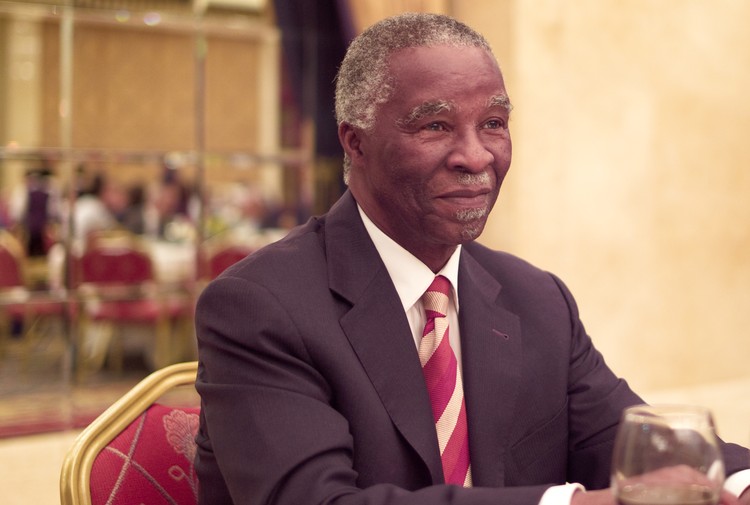 Former President Thabo Mbeki has once more found himself in conflict with HIV activists. Photo: Mohamed Nanabhay (via Flickr, CC BY 2.0)

The Treatment Action Campaign (TAC) has called on former president Thabo Mbeki to offer an apology to the public for the “dissident” views he expressed about HIV/AIDS while delivering a speech at the University of South Africa (UNISA) last week Wednesday.

In a scathing statement published by the TAC on Tuesday, the organisation said the “repetition of his scientifically erroneous views with such insensitive arrogance is an insult to the 8 million people living with HIV in SA and the families of 4 million South Africans who have died from HIV over the last three decades”.

Mbeki, who is also the Chancellor at UNISA, was speaking to students, diplomats and members of the media at an event which takes place twice each year and allows students to interact with him on pertinent issues that affect Africans.

The TAC accuses Mbeki of misleading the public when he questions the cause of AIDS. The organisation also goes on to say that they were stunned again by Mbeki’s support of the views of the late former Minister of Health, Manto Tshabalala-Msimang “who was ridiculed for promoting garlic and beetroot as the essential ingredient to manage AIDS, giving it a higher premium than antiretroviral (ARV) treatment”.

“Whilst there may be benefits in all healthy foods, the idea that these vegetables are what are most required in the management of AIDS has no basis in fact and is misleading to the public,” said the statement.

Speaking about HIV/AIDS after a question was raised in the event, Mbeki said the questions that he raised then, he would still raise today. He emphasized that AIDS was a syndrome and not a disease.

“Now this syndrome in medical terms is a group of diseases. So all of these diseases which fall under this syndrome, meningitis, TB, they’re in the syndrome.”

“Causes of Tuberculosis are known and historical, but it’s part of the syndrome. So you can’t say one virus causes all of these illnesses, what you can say is this virus impacts negatively on the immune system, it’s that weakened immune system which results in a syndrome.”

“But there’s a consequence to that kind of thinking which is when you go to test and that test says HIV positive… it does not necessarily mean you’ve got the virus. What it means is that the immune system is responding to something that is threatening the body, and therefore you need a clinical analysis in order to determine what is this thing that the immune system is rejecting. It’s in all the medical documents that go about it, and it’s correct, because then you have to go and do this clinical examination in order to determine which of these illnesses in the syndrome is the one that’s affecting this person. And then you treat the person for that particular disease,” said Mbeki.

Mentioning the views of Tshabalala-Msimang, Mbeki started off by saying as government they had to respond in an effective manner to the HIV/AIDS pandemic and various interventions were needed to do this.

“Which is why the question was raised by the then Minister of Health in a very dramatic fashion. Nutrition. Nutrition is very very critical to solving this problem and that’s why she was saying that we must take garlic and beetroot and so on. She was not saying that with those things you’re going to be cured.”

“She was raising the matter about the importance of nutrition. And those particular types of foods even today have been raised in the context of this Covid-19,” said Mbeki.

The TAC, which successfully campaigned in the 2000s for Mbeki’s government to roll out life-saving medicines, was not impressed.

“There is much ongoing stigma and denial when it comes to HIV and we call on Mr Mbeki to desist from statements about HIV that have no basis in fact,” said the TAC statement.

It said: “The former president’s statements remind us that his unscientific views led to a delay in the rollout of the ARV programme during his presidency.”

The TAC’s General Secretary, Anele Yawa, said that if Mbeki was not prepared to apologise, the organisation would make sure that his HIV denialism and the thousands of deaths that resulted, would be the only thing that he would be remembered for.

It’s seldom clear what Thabo Mbeki means when it comes to HIV/AIDS. There is much obfuscation. But the key facts are this:

Next:  Immigrant children share their stories through art and music