Patient describes how they fear nurses 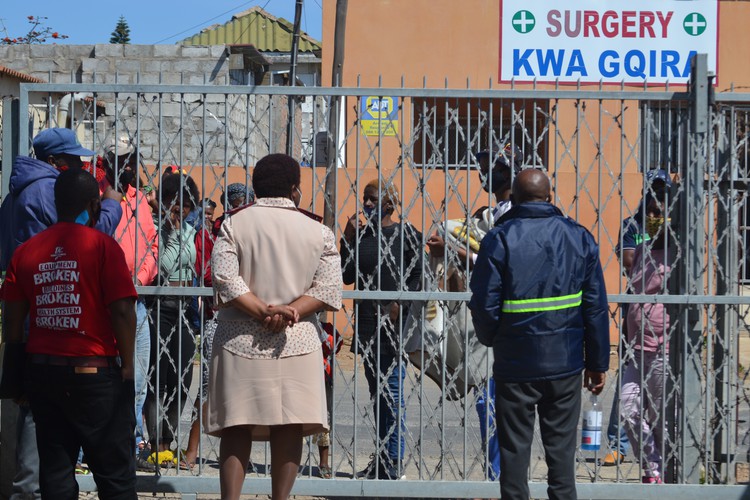 TAC’s Anele Yawa (red T-shirt) asked the operational manager (on the right) at Soweto-on-Sea Clinic in KwaZakhele, Port Elizabeth to open the gate for patients on Friday. Photo: Thamsanqa Mbovane

Dozens of patients seeking medical assistance from clinics in Port Elizabeth are still being forced to wait outside the facility, says the Treatment Action Campaign (TAC).

This despite the president’s recent announcement to further ease lockdown regulations to level 1 following a decline in reported Covid-19 cases.

Patients are seen queuing outside facilities as early as 7am. By 9am, only five people are let into the clinic while the rest remain outside. This was implemented at the start of lockdown to minimise points of contact with patients to slow spread of infections.

TAC told nurses at the facilities that “health is a fundamental human right” and that protective equipment was available for staff to wear when interacting with patients.

At Thanduxolo in Steve Tshwete village in Motherwell, 64-year-old Vukile Paki claimed nurses were rude to him. Paki said he had stomach pains and was waiting outside the clinic since 7am for help.

“Nurses arrived after 9am and drove past us while the gates were still locked. This is the daily situation and we always pray for sunny days, because the winter cold is biting,” he said.

“When you have a headache you must stick to a headache and never mention other illnesses. If you do mention more than one, they tell you to either choose to be treated for one instead of too many. At times you would even be afraid of seeing a nurse coming to you. It’s traumatic.”

When TAC members saw patients outside Thanduxolo on Friday, secretary-general Anele Yawa asked the clinic’s operational manager Nombeko Taitai to get chairs for patients to sit on inside the yard. The gates were then opened, chairs put out and people were allowed on the premises.

When the TAC delegation arrived at the Soweto-on-sea clinic, patients which included teenagers, pregnant women, and old people were also queueing outside. “Why are these patients queueing outside this clinic?” asked Yawa.

Noluthando Nyipi, operational manager, said she was ordered by her bosses not to allow patients inside because the toilets were not working. “There is no water. We really feel sorry but we have been instructed.” Yawa eventually convinced the managers to open the gates and put out chairs for patients.

TAC said it would soon meet the Eastern Cape Health Department’s head Dr Thobile Mbengashe to highlight the problems it discovered during their visits to clinics. Some of the other issues include ageing infrastructure at clinics, lack of security at night, shortage of staff, the attitude of nurses and patients going from clinic to clinic in fear of being stigmatised.

Eastern Cape Health spokesperson Siyanda Manana did not respond to questions by the time of publication.

Next:  Groundbreaking court judgment on mining and community rights

A new vaccine is being tested in Cape Town: Here’s why it’s different