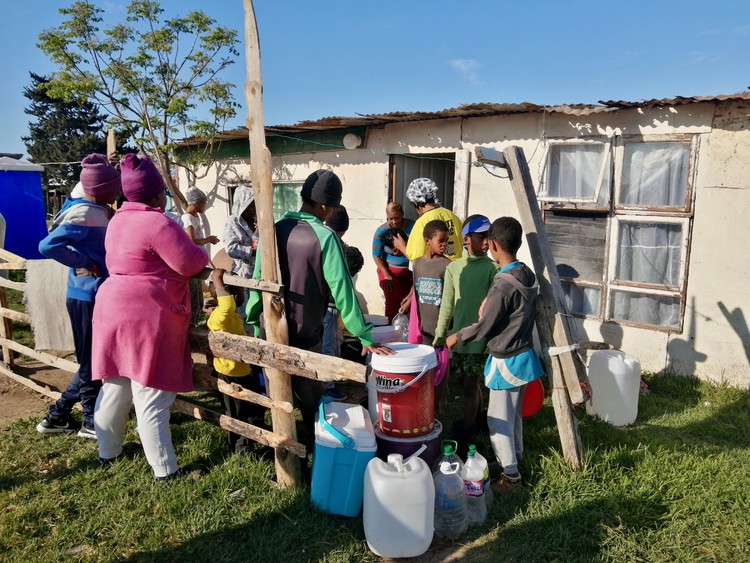 When water was cut off last week for two days in various areas around Port Elizabeth to reroute a pipe, an enterprising shack tenant in Missionvale took the opportunity to sell municipal water for R5 “a go” to frustrated residents. She has now been told to leave her shack.

During the repairs, only two water trucks had been provided for Missionvale, Smartie Town and Rolihlahla townships, and there was not enough to go around. Meanwhile communal taps dating back to 2012, before RDP houses were built for the residents, only had a trickle of water and long queues formed.

Shacks have since been built over some of the old communal standpipes. On Friday, residents flocked to them, demanding water. In the one shack, Sandy Van Reiner let people take water for free, but Rita Spoogter demanded R5 a go at her shack and it was the shortest queue for water.

“These people are making my floor wet. The tap is inside my house. I am unemployed. I need money to pay rent and buy food … Whoever wants the water should pay R5, and I don’t charge per bottle. You can draw water as much as you want,” Spoogter said.

Resident Zola Venani was furious. “This is unfair because that shack was built over a municipal broken communal tap.”

But Veliswa Sovendle, of Rolihlahla said, “I bought water … I couldn’t stand in those long water queues because I still have to go to work.”

Ward committee member Mavis Masimini confronted Spoogter: “What you are doing is illegal. People are in dire need of water and this is a municipal tap … meant to help the community.”

But Spoogter ignored her and continued selling water.

The owner of her shack, Lawrence van Niekerk, was outraged. He has been living in the area for almost 20 years. He said he only discovered the tap, already closed off by the municipality, when he was going to put in a cement floor.

“My RDP application was not approved because of my high salary. Then I have been letting other people live in my shack for free to prevent vandalism. I am renting an RDP house near Missionvale Primary School. My tenant [Spoogter] has been living in this shack for about three months,” said Van Niekerk.

“I told her to find her own new place. What she has done is not acceptable. I will move back as soon as she finds her own place because I don’t want anymore trouble,” he said.